The forecast for Sydney was a month’s worth of rain on Sunday. Saturday and Monday weren’t far off similar totals. And it wasn’t just Sydney – a large swath of the surrounding area would also get the deluge. So it wasn’t a difficult decision when asked if I wanted to do the ACT Rogaine on Sunday. Canberra seemed to be just on the edge of the east coast low, and would hopefully avoid most of the precipitation. I was feeling slightly ripped off as the rain got heavier and heavier as we drove towards Canberra on Friday afternoon!

Saturday dawned dry, but cold and windy. By comparison with what was going on in Sydney we were in tropical heaven and so bushwalking we were going. Ali had suggested that we would encounter lots of long wet grass, but the wind dried everything out so that promise came to naught. We opted for something closer to Canberra and not too high – and what a great option it ended up being. 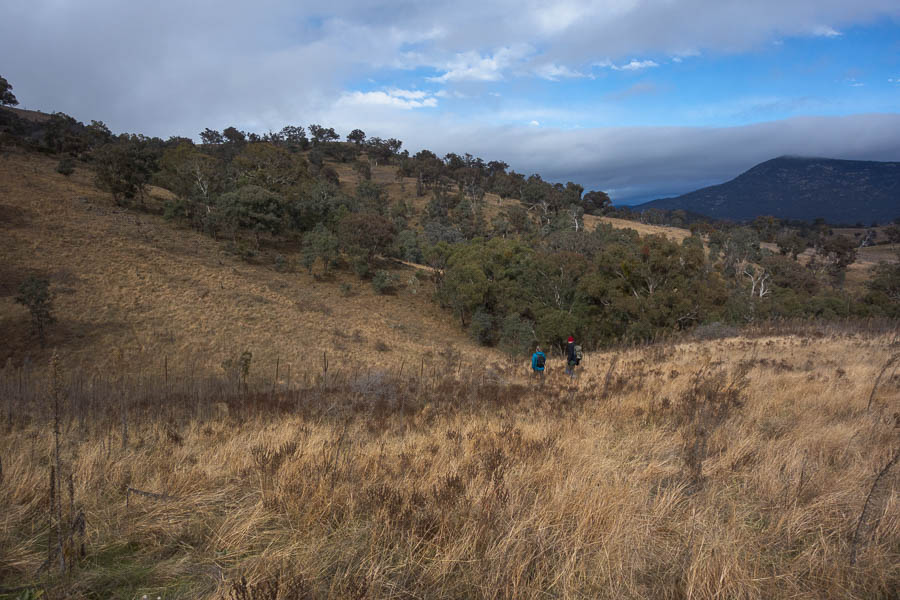 Is that blue sky I see?

After being blasted by the wind as we wound our way around the base of the reserve, we soon warmed up once we dropped into the creek we planned to ascend. The creek was a delight – the rock was dry, otherwise it would have been a nightmare. Lots of easy scrambling and rock-hopping. And it just kept going. 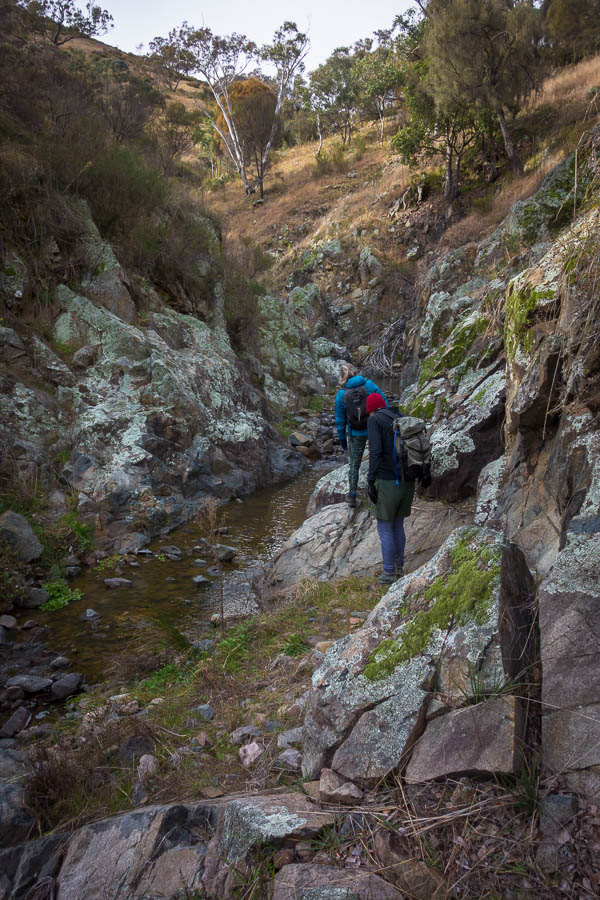 What have we got here? 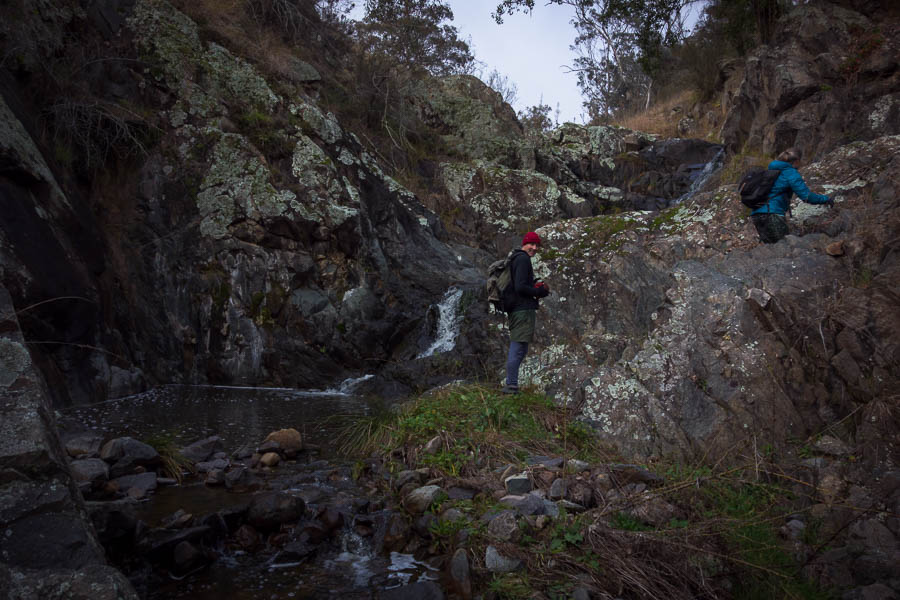 Tom & Ali working out a way 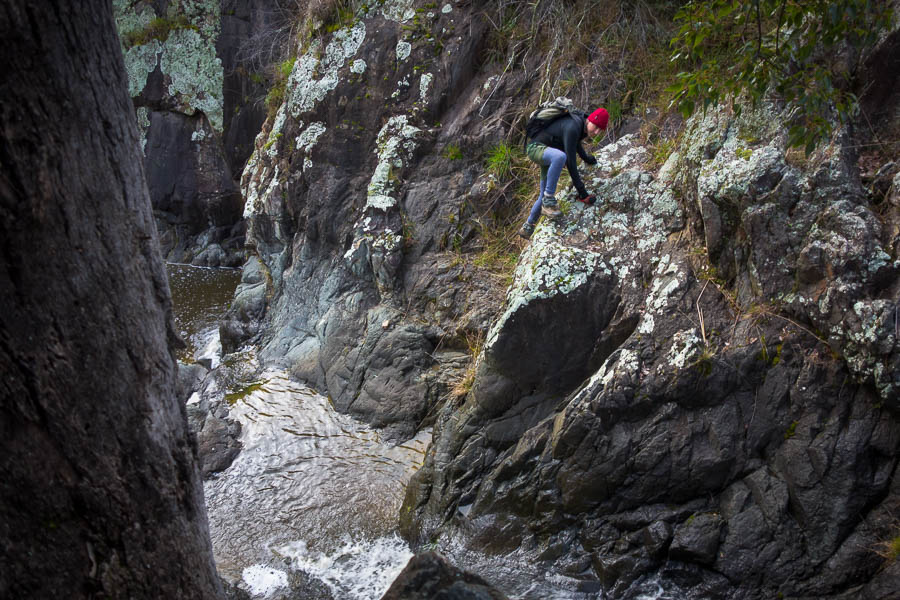 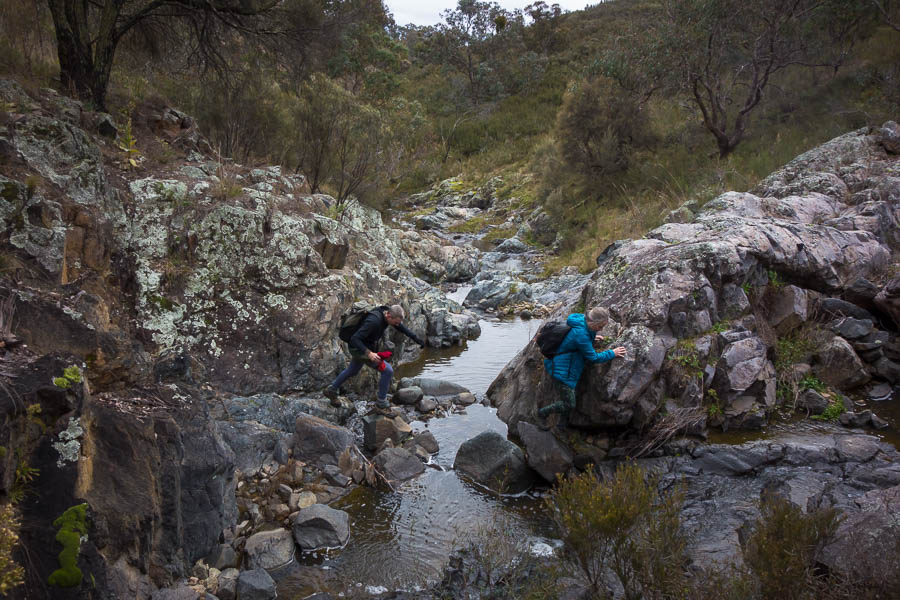 Eventually we got to the waterfall which was the main attraction of the walk, we had morning tea on top but soon got moving again as the wind quickly chilled us. 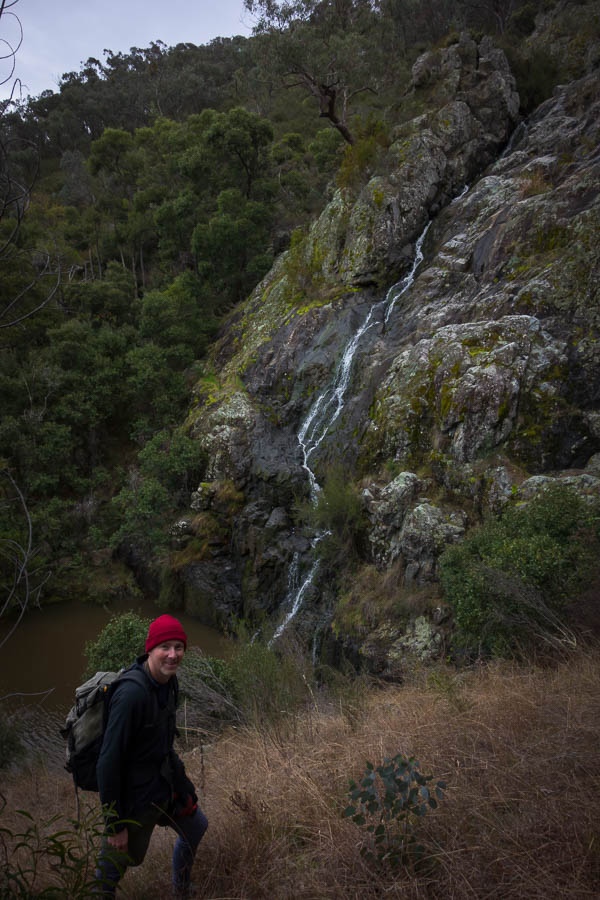 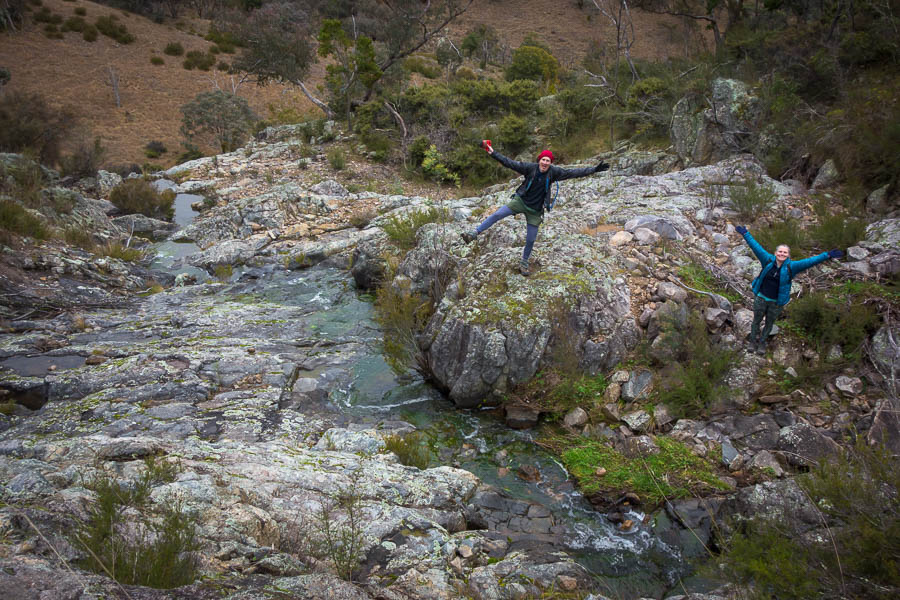 It was a similar story on Big Monks Summit – not somewhere to stick around – but we were much more protected once we dropped off the side. 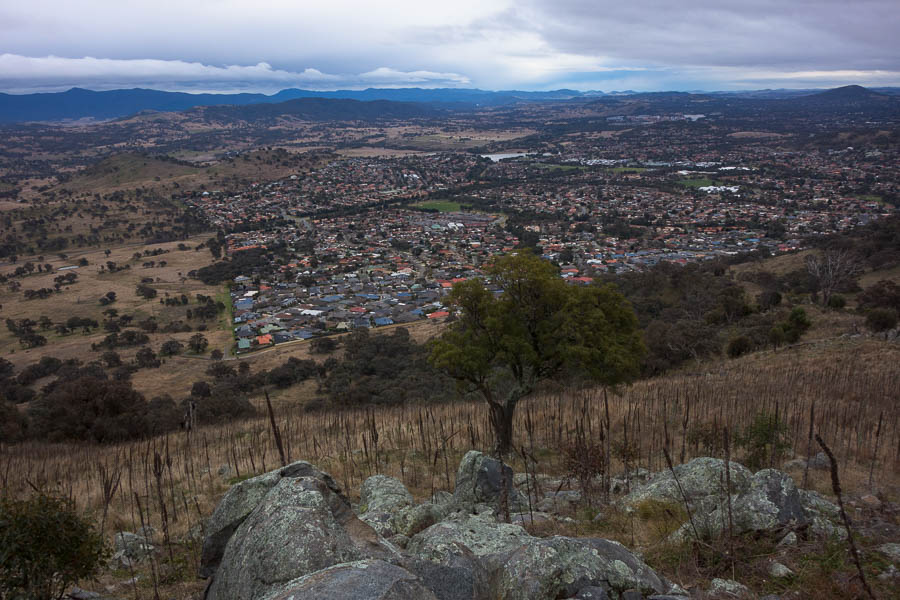 The edge of the urban sprawl 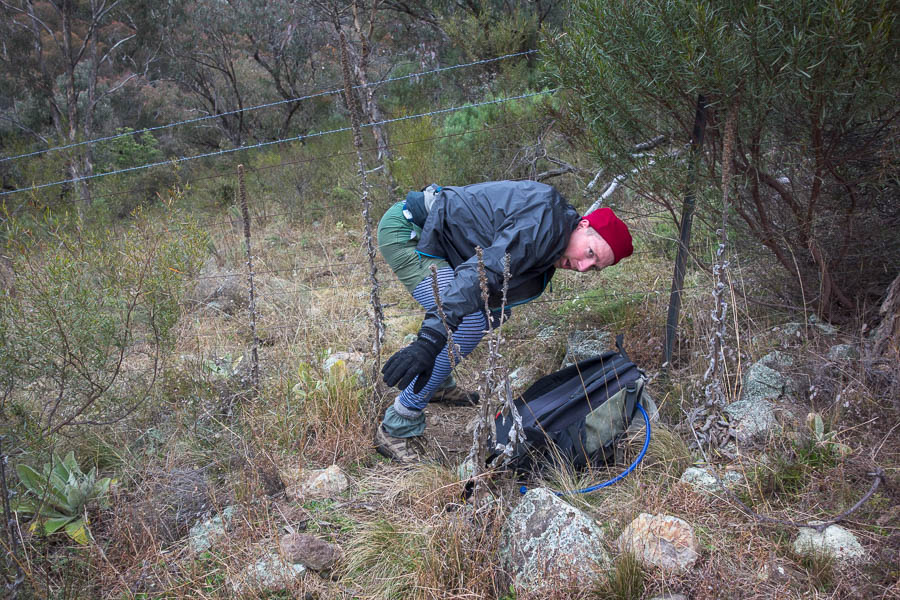 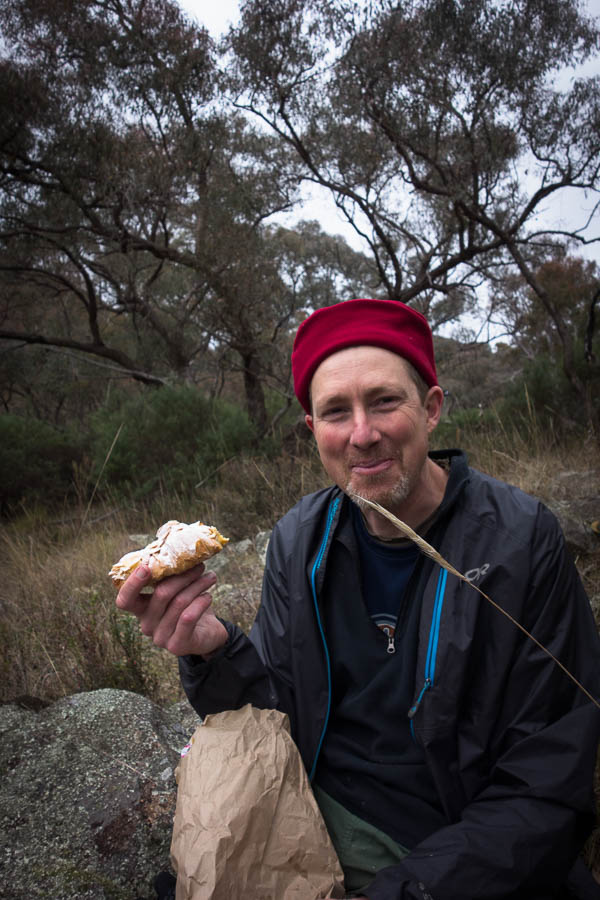 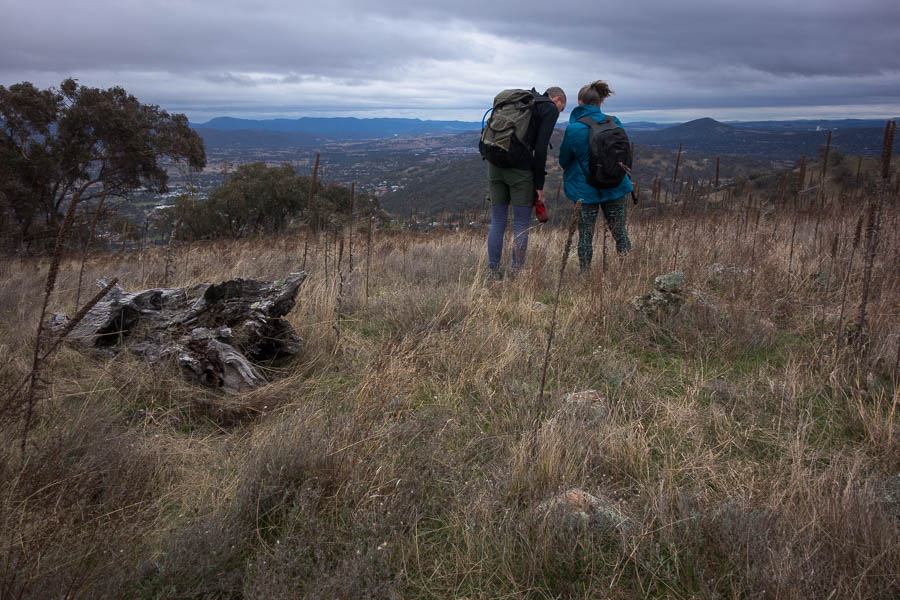 Conferring on the route

The final creek of the day was nowhere near as enjoyable as the other ones we’d walked in so Ali & I quickly made it back on to the tops. Soon we picked up the main trail and then it was just a contouring jaunt back to the car. An excellent walk for less than pleasant weather conditions (but no rain!).

The forecast on Sunday was worse but I had my fingers crossed we’d get a similar day to Saturday. This was mine & Jo’s first pairing in a rogaine and it went pretty well. I’ve never done a 4 hour rogaine before – an unusual length – but long enough to stretch the legs. Particularly since we chose the hilliest part of the course (since running wasn’t on our agenda).

We constantly leap-frogged a team of 4 for the first part of the day. We were pretty confused when only 2 of the team members seemed to actually go to each control. I think maybe each team only had two wrist-bands so the two which didn’t have them didn’t bother getting to the control – doesn’t really seem within the spirit of things. But anyway – they would run past us on the fire trails – we would then take a cross-country route to the next control, shortly after they would run past us again. Oh the feeling of smugness to come out ahead of them on the road. 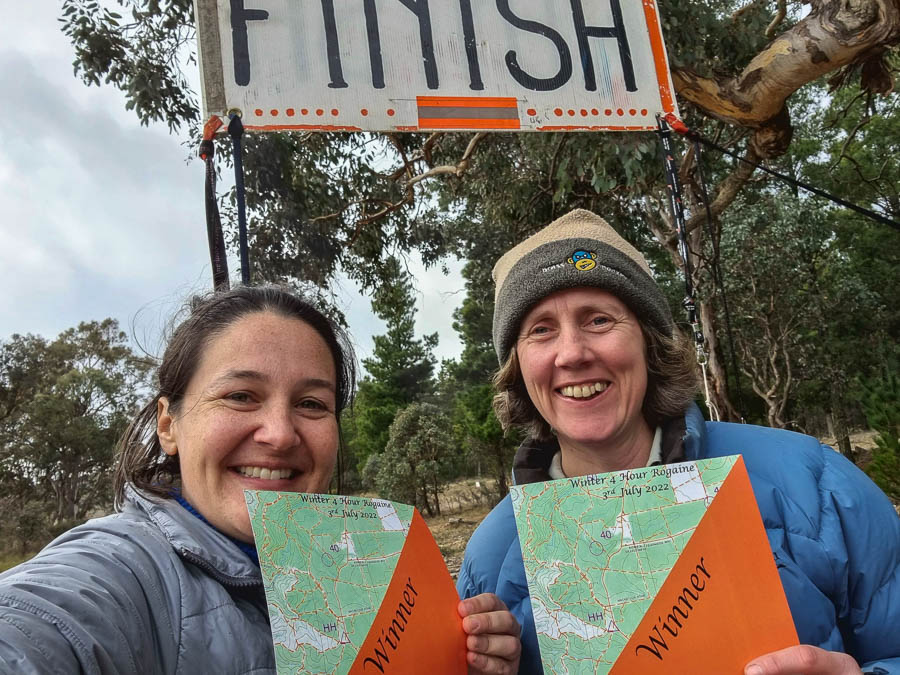 We pulled out a 1st in the Women’s Division – but at 21st overall it wasn’t a particularly impressive victory. That said, there was only 60 points separating the 10 teams above us (810-870). The overall winners did have a resounding victory on 1400 points – second place 240 points behind them! Hartley Lifecare did a great job with the catering – can’t really go wrong with cheese toasties and soup on a coldy, windy day. The rain started as we were driving out to the main road – so winning all round!