The forecast for the weekend was excellent, and I had Friday off so we decided to make the most of it with another three day trip. It almost got stymied on Friday morning. The alarm went off, we’d both slept poorly, Tom had appeared uncertain on our route when we’d gone to bed. I floated the idea of going back to sleep and making a 2.5 day plan later that morning. But given the amount of agonising we’d already done over this trip we couldn’t face starting again, so we ended up just getting up and getting on with it.

We had a last minute change of starting point, as the road seemed more accessible compared to our original launch point. But that meant Tom hadn’t looked at the spurs on the aerials so we were going on the basis that the topo looked like it went. What could possibly go wrong? The road access was straight-forward and after some prevaricating over whether to park just inside the park (and thus not on the private property just outside it) we were on our way.

I felt very jittery as we started our first steep descent. I put it down to a heavy pack (3 days of food – and we do like to carry fresh fruit & veg), lack of sleep, plus two coffees. We briefly got out of earshot while pass finding on the way down. We’ve had a few times recently where it’s been apparent sound really doesn’t travel very far in the bush. That or Tom is going deaf.

After morning tea we then had a big climb which was straight-forward, before some flattish but quite scrubby ridge walking. When we finally got to some more open sections I seized on the first rocky outcrop for lunch. I was happy with it, it was big, flat, had a choice of sun or shade, and had a nice area to sit. I was pretty happy with it, until almost straight after lunch we walked past a very similar rocky outcrop which also had expansive views! Next time.

We were pleased to find the ridge was a lot less scrubby post-lunch so we made better time as we navigated our way through the wiggly turns. 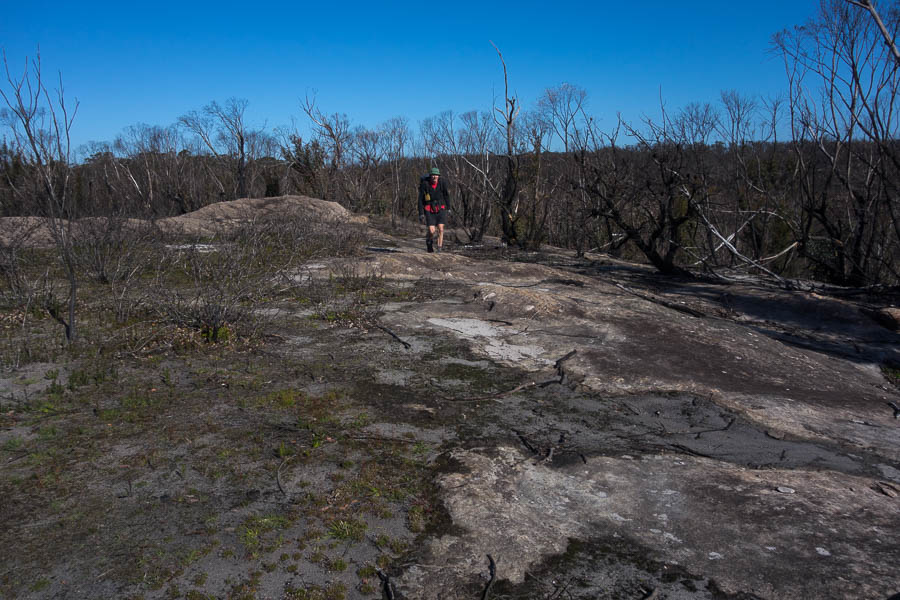 Enjoying some faster walking sections after lunch on day 1 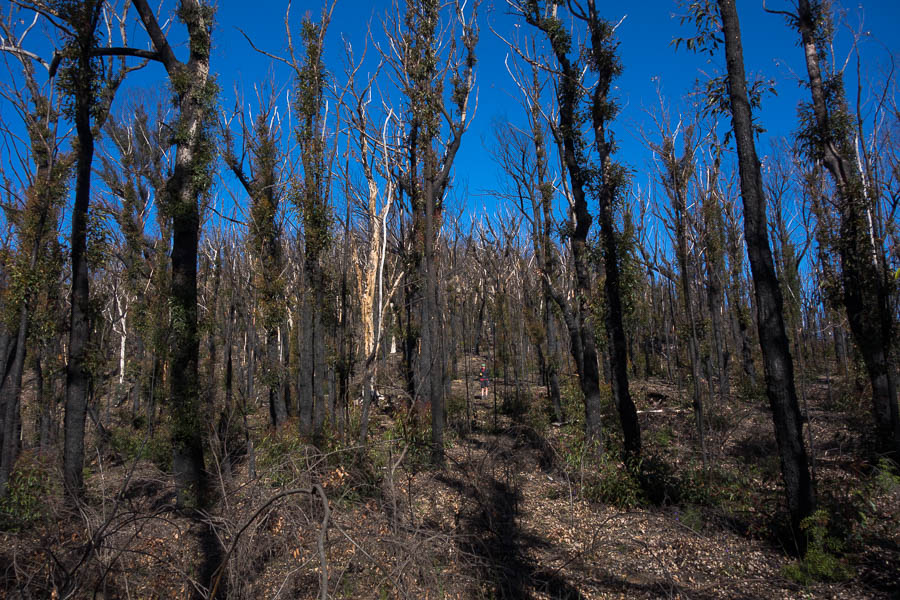 Then there was a straight-forward, far less jittery feeling, descent into a creek where we loaded up on water to get us through to the middle of the next day. 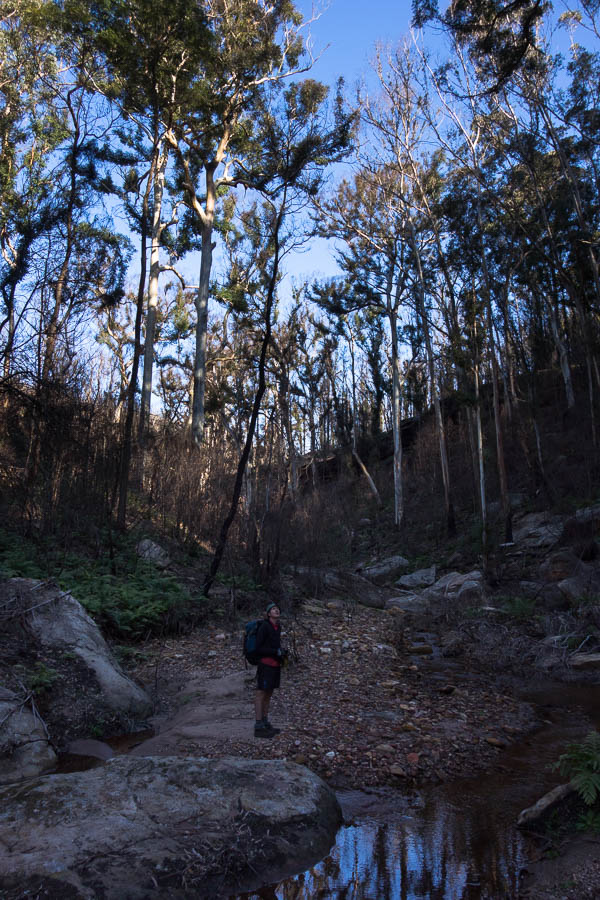 We should be getting good at carrying these heavy packs having had so many high camps in recent weeks, but it doesn’t seem to get any easier. 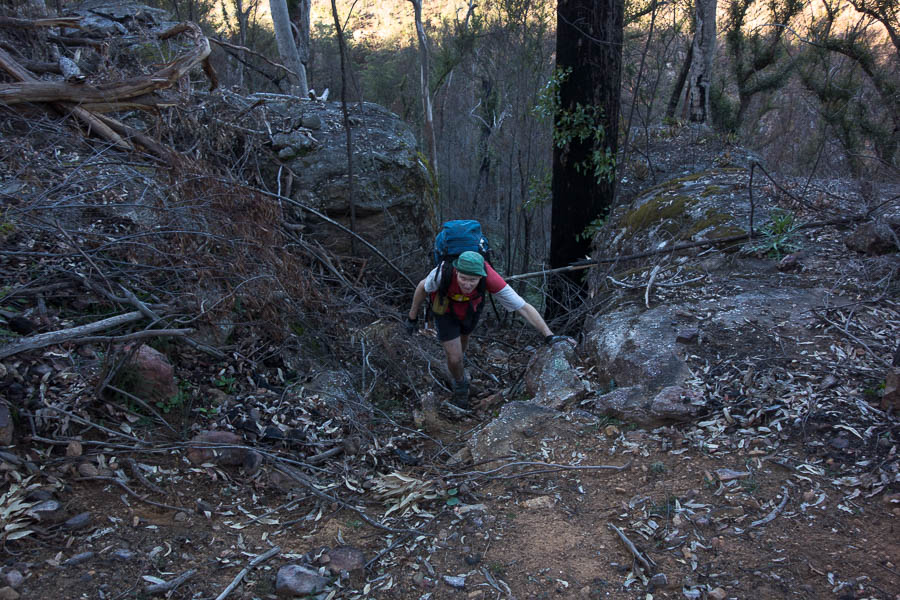 It’s not all sunset photography…

It seemed to take a lot of time to get to our intended camp spot – due to more scrubby ridges and us being tired. We seem to have made a habit of racing the sun to camp… Fortunately there was both somewhere to put the tent and a cliff edge for happy hour and photography.

Though a lot of it is! 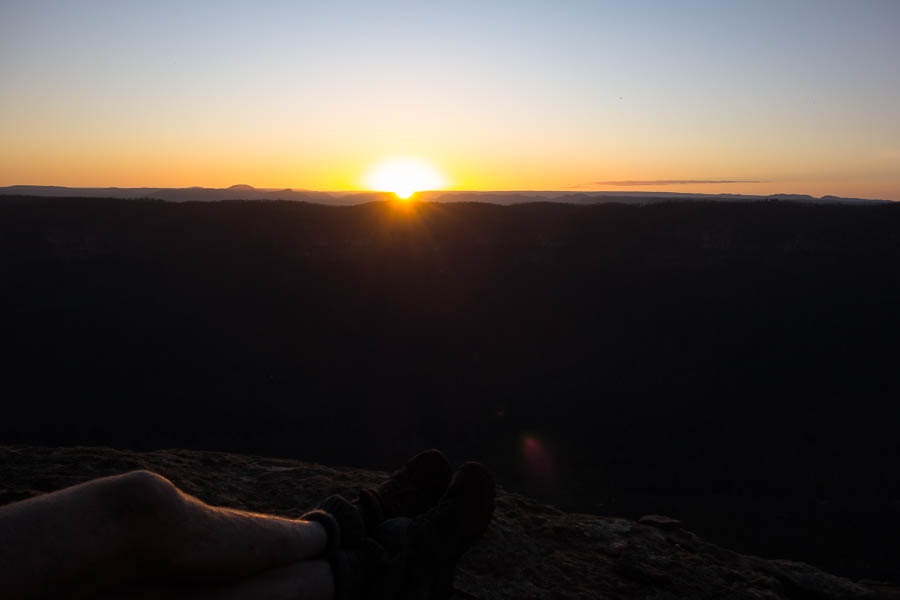 Sunset, with the distinctive Mt Colong to the left 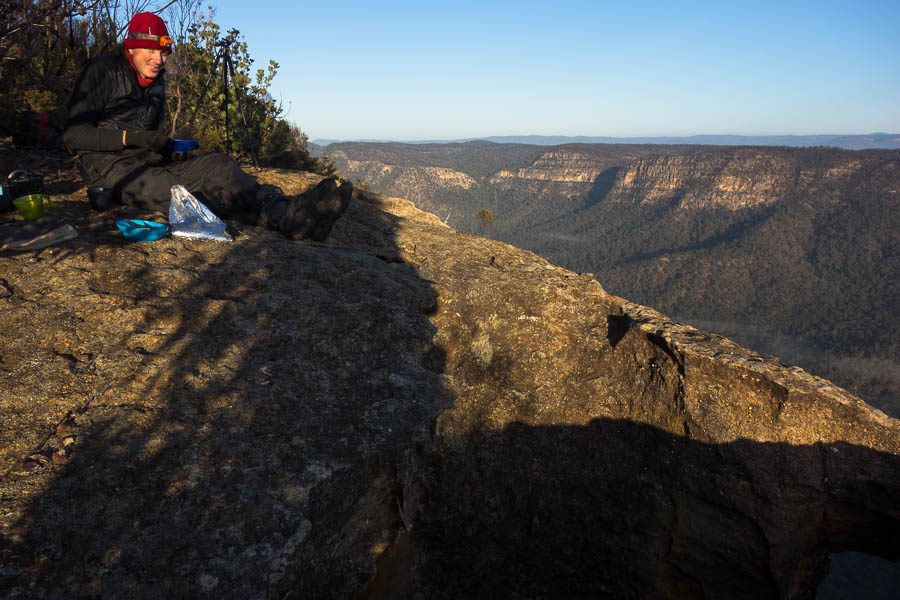 And then there’s breakfast photography 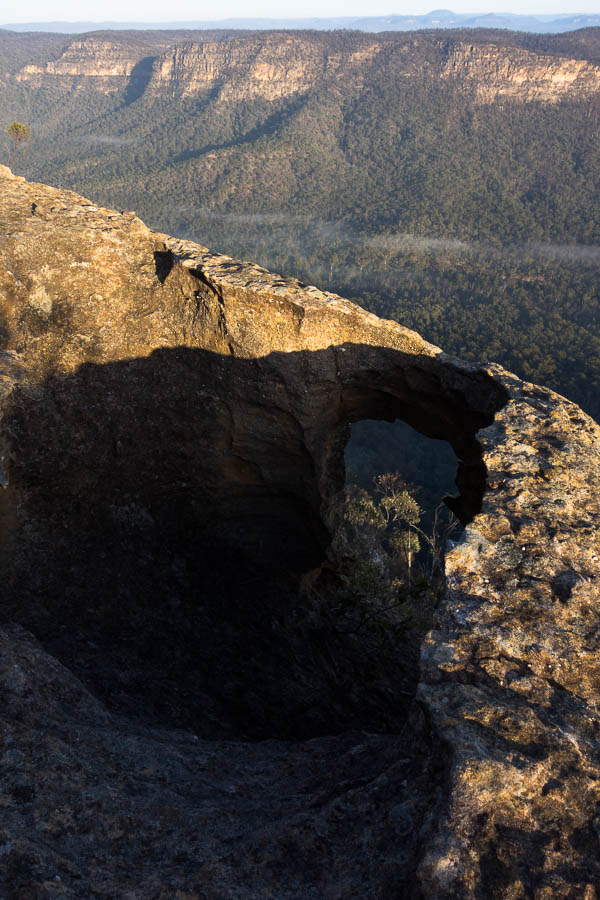 This lookout felt a little ‘airy’ 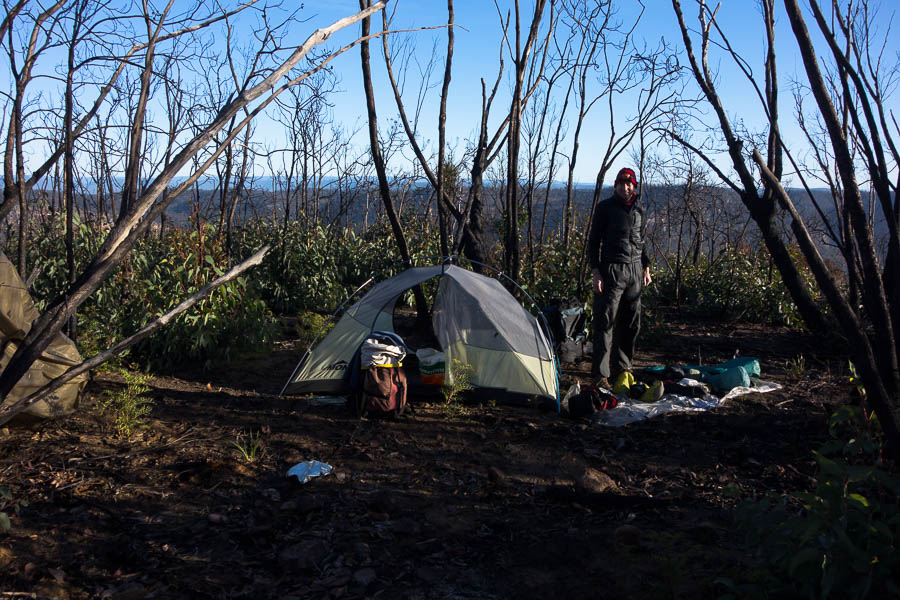 I had optimistically planned out our second day. 4km for 2 hours seemed reasonable? Apparently not, more like 3 hours. The fires had not affected this area as much and we got to reminisce about what walking pre-fires was like…. 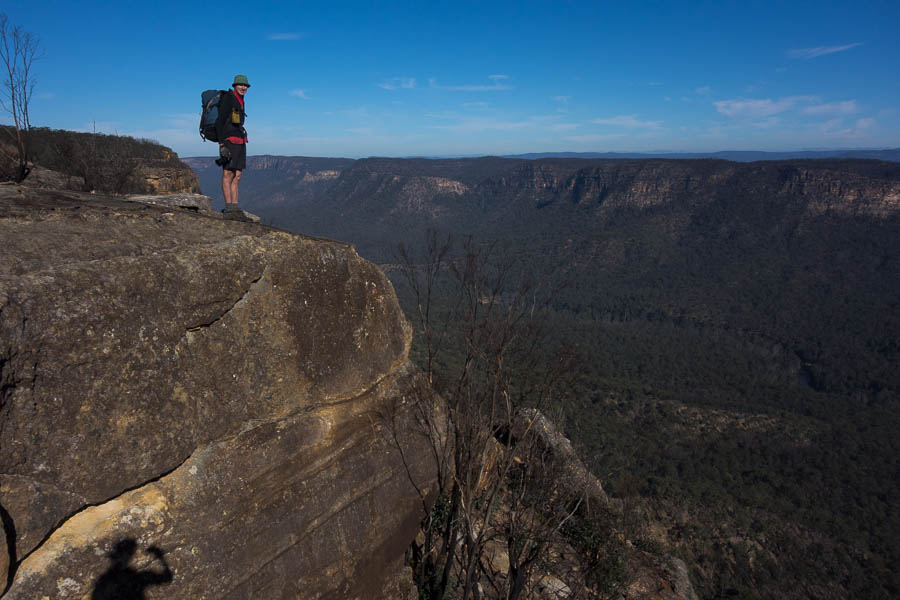 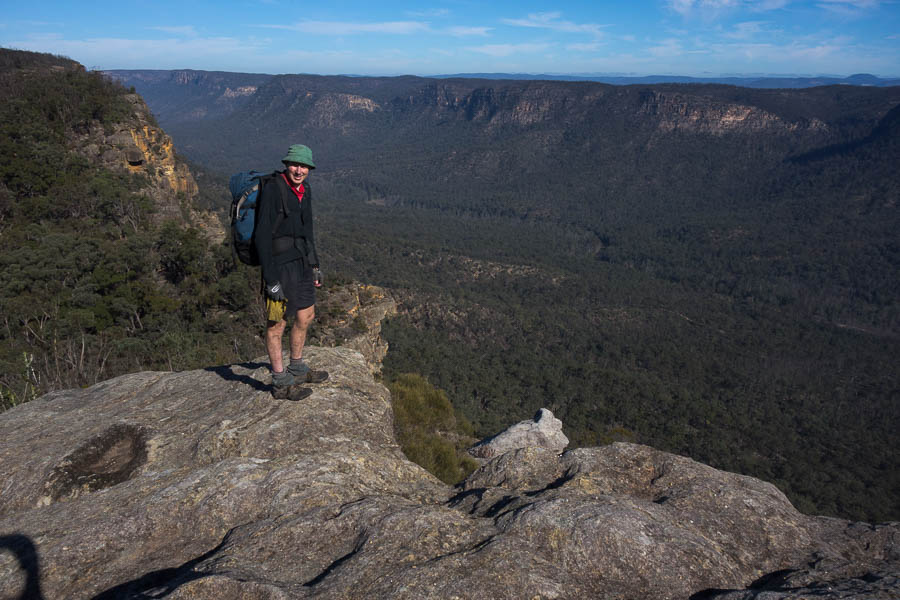 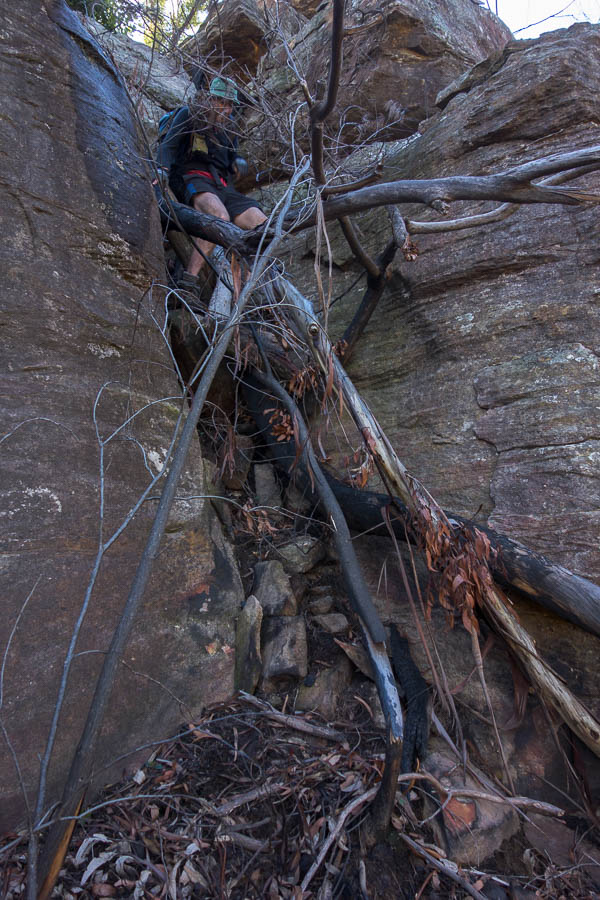 Already an hour behind schedule we seemed to be making good time getting back to the creek. Until we were stymied by a 3m drop from the side creek into the main creek. So back out of the side creek we climbed and bashed away towards the next side creek hoping we’d be able to get down there! Finally we found a way into the creek and at 1:30pm (only 2+ hours behind my optimistic schedule) thought we should probably have lunch. 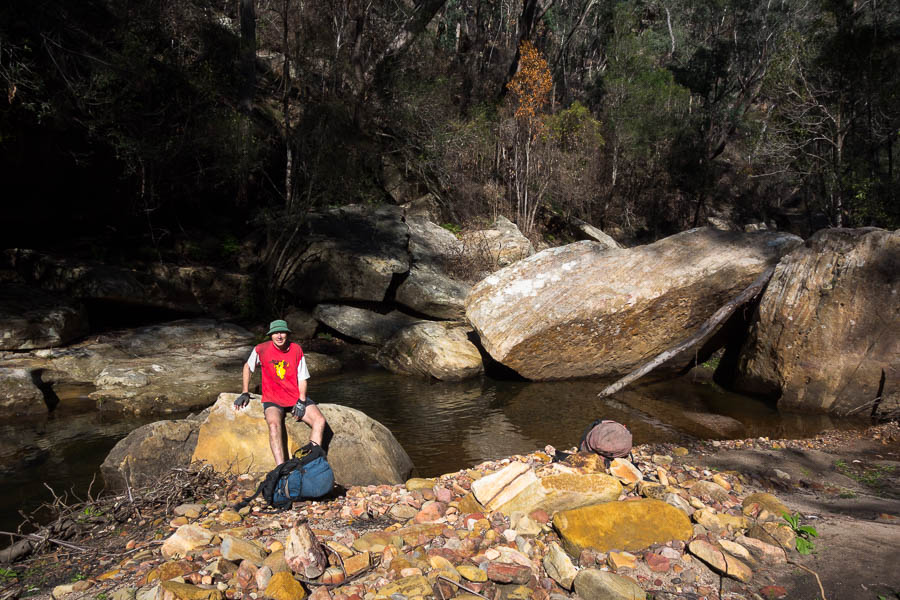 Eventually… and I mean eventually… we made it to the creek for a late lunch. A tough morning.

Of course since we were now in a different part of the creek Tom hadn’t studied the passes out on the aerials. Once again we had to trust to the contours on the topo. I proclaimed there was a dirt ramp out of the creek and the contours looked ok on the spur right next to us. Of course looking up at the cliffs, which were nowhere to be seen on the map, was slightly daunting. Tom managed to get up a small climb and put a rope down to haul my pack. To thank him I scraped his knuckles across the rock as he gave me a hand to get up the drop. Fortunately for me he suffered through the pain rather than let me topple down the 10m drop! 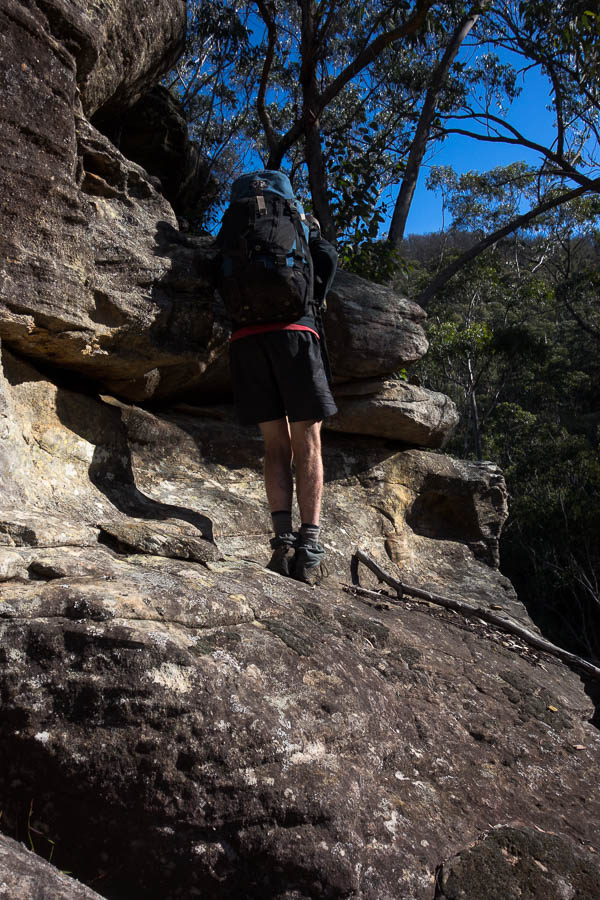 Finding a pass out of the creek post-lunch

Fortunately the rest of the spur did resemble the contours on the map and we got up it with no further issues (except once again we were hauling water for the next 24 hours). 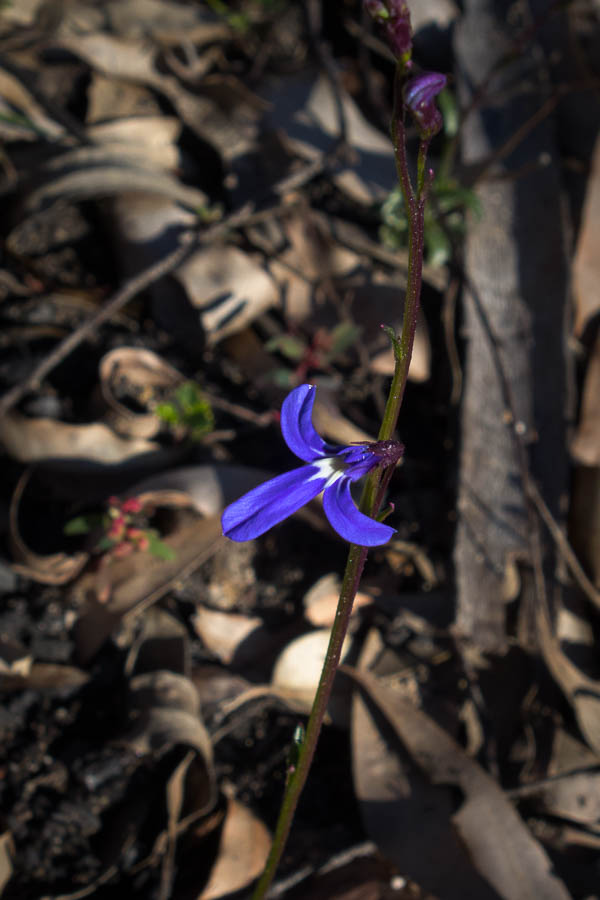 Lots of these were in bloom 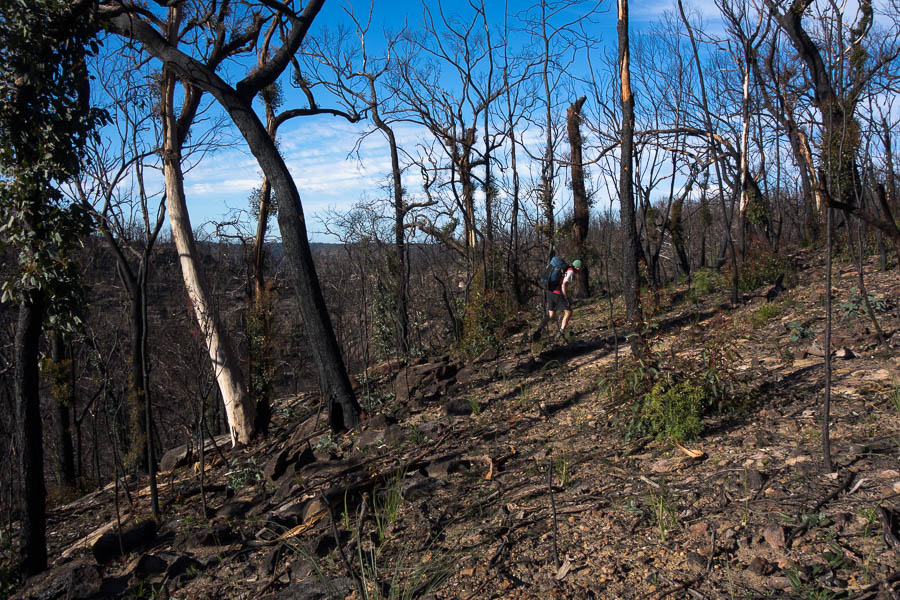 Almost at the top of the hill

It was nice to settle on a campsite by 4pm giving us time to set up in a somewhat more leisurely fashion. 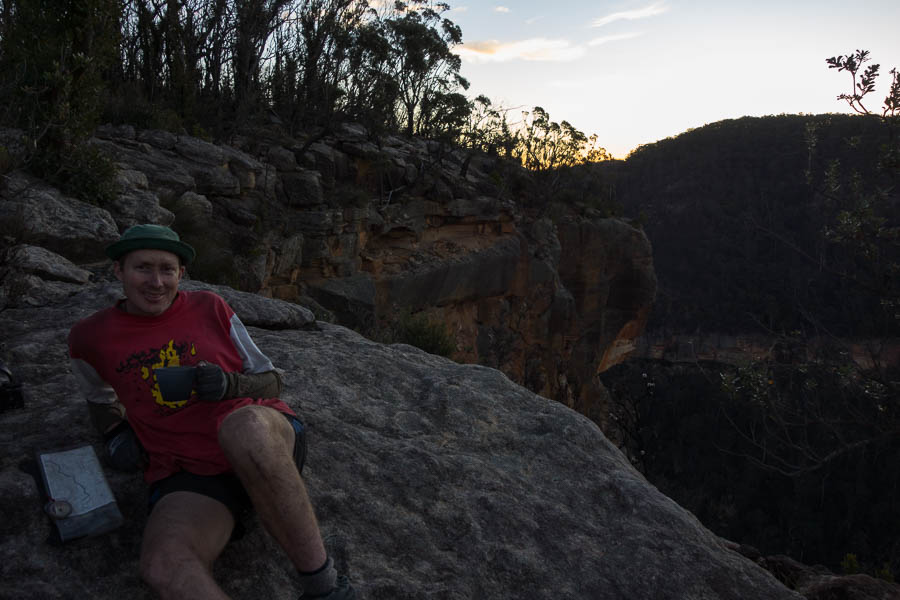 Relaxing after a hard day

The campfire was in a very satisfactory situation with backrests for both of us! So it was a comfortable night around the fire. 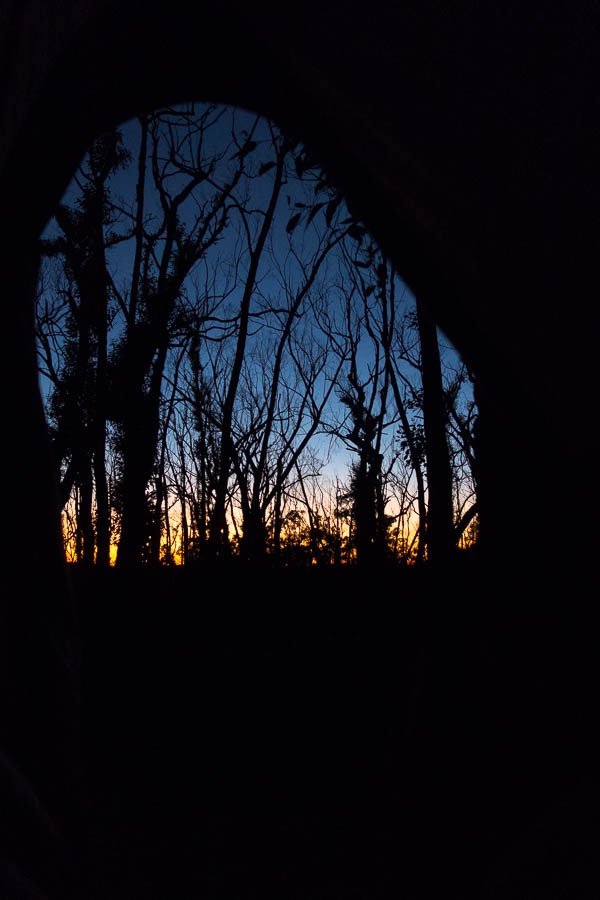 Early light from the tent

As always Tom was up early to photograph sunrise, while I was content to watch the early light from the tent. 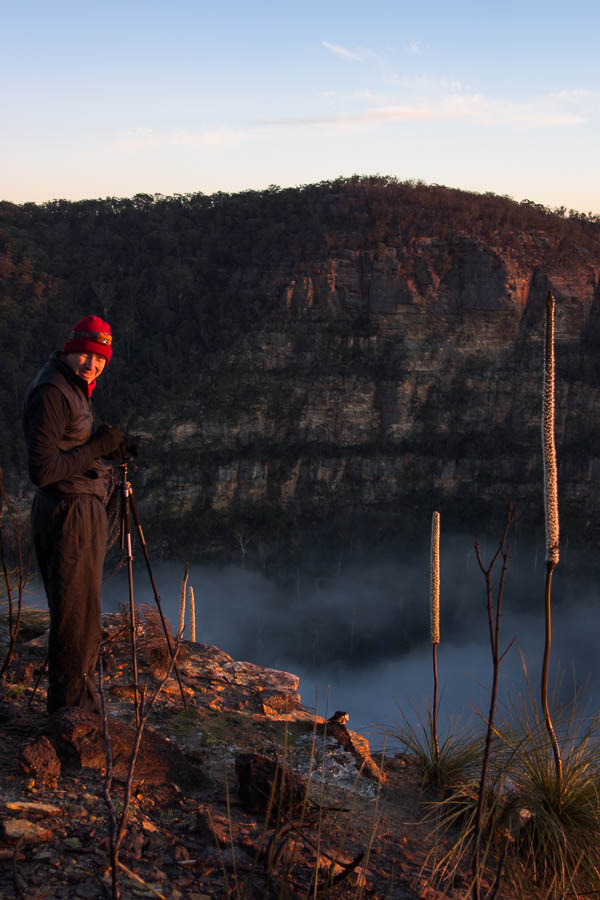 There was just the right amount of valley cloud – unlike like last week (too much) and the day before (not enough). Unfortunately that meant there was a lot of photo-faffing, and since we were camping where we had intended to have lunch we needed to get going! 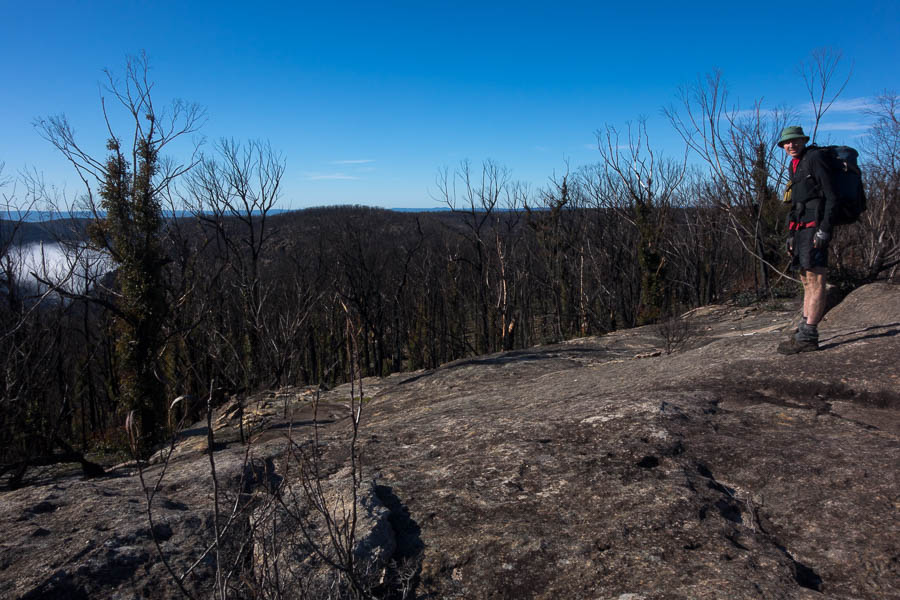 The last of the valley cloud

Fortunately the first section was seriously burnt so we made good time. 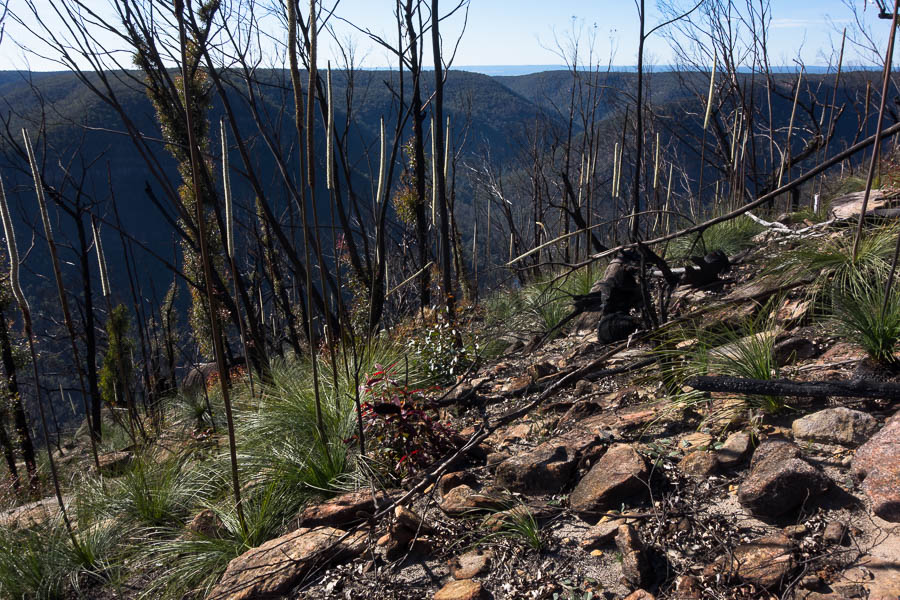 Our next challenge was another ridge that we didn’t know if it ‘went’. We’d checked it out from afar two days earlier and it looked like it could have some intrigue to it. 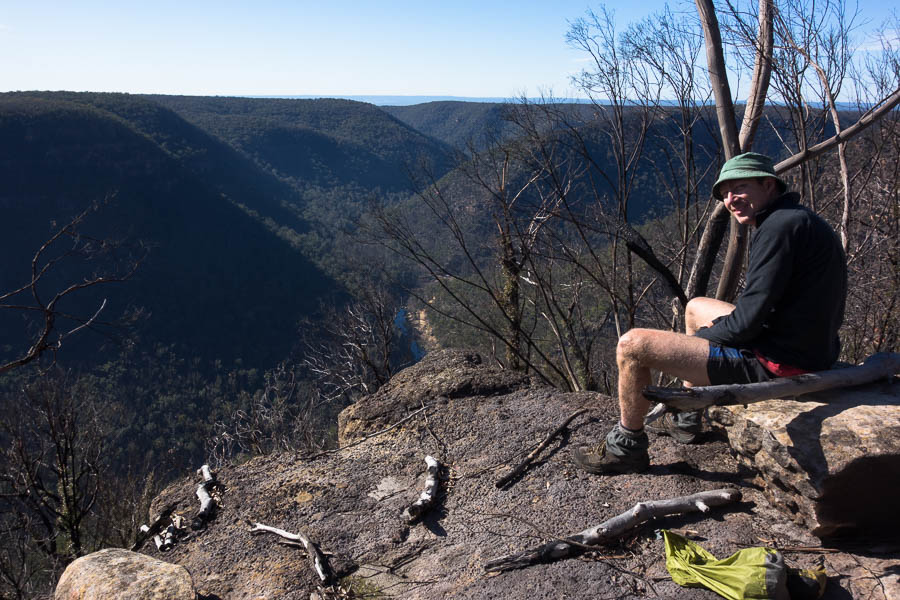 ok, so all we have to do is work out how to get down to the creek

We made our way through two clifflines and were feeling pretty good. Until we realised the ‘second’ cliff-line wasn’t the final one. Soon I was standing at the edge of a large cliff. To my right was the side creek where a pretty impressive waterfall plunged into the valley. There was no way down that. Our earlier viewing had suggested there was a treed ramp to the left… We contoured around and around, me leading the charge hopeful of finding a gully we could get down. Tom less enthusiastically following me, especially after I yelled out “I think we’re stuffed” (or perhaps something slightly less polite). Fortunately he did eventually follow me some way, and while I was retreating he went investigating. Some time later he declared we had a way down. 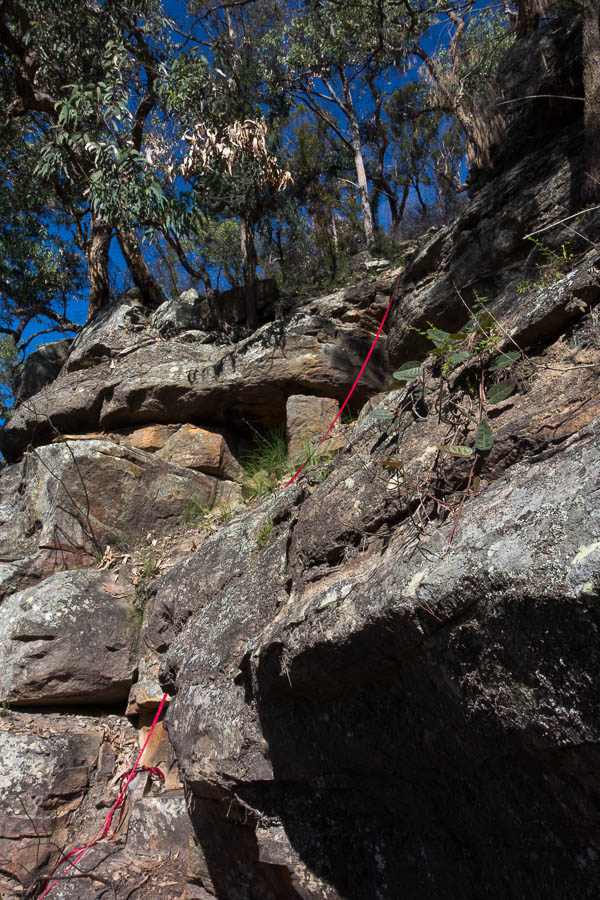 It involved some tape, a crawl, and a step across, but eventually we were through the cliff line! This was a great relief because it would have been a very long way to get down any other way. 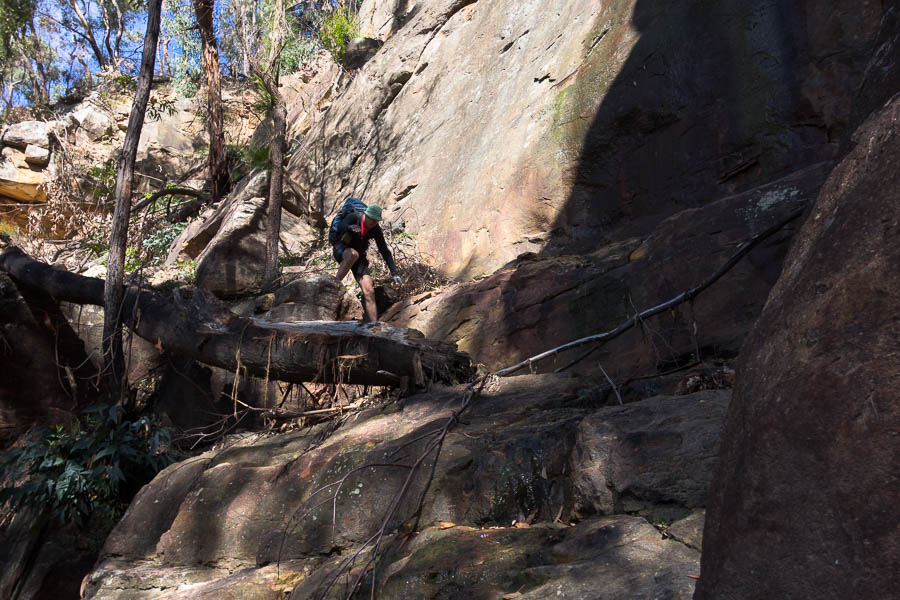 And a bit of a crawl, and a big step across

The rest of the descent passed without incident and we were glad to have lunch next to the river. 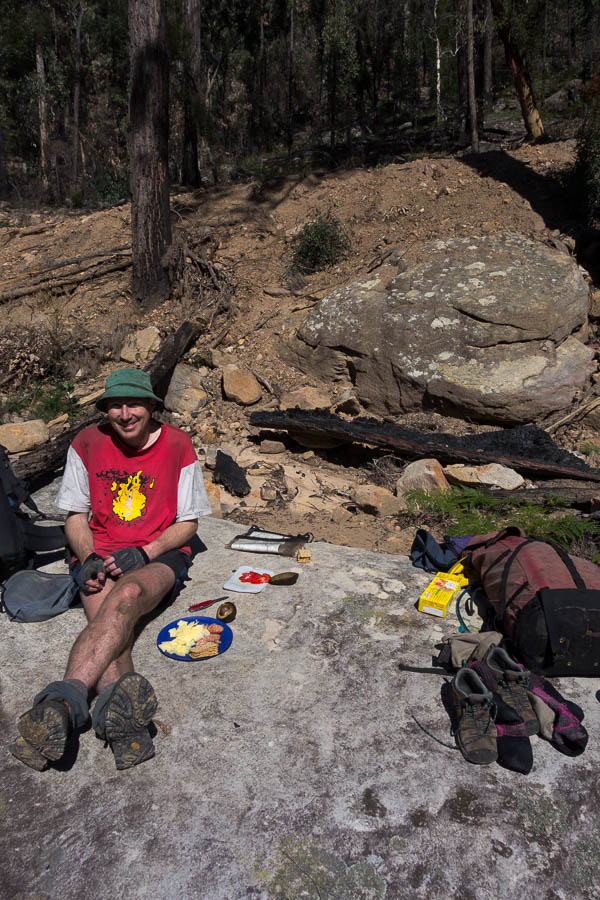 We made it down! 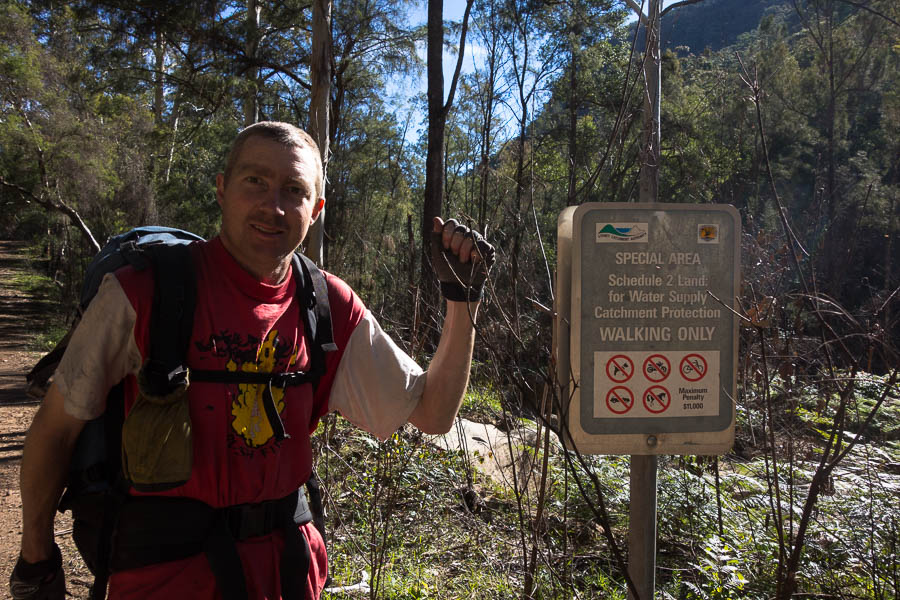 We had one more unknown spur in our route. Once again I proclaimed the contours looked fine. In fact it was a most enjoyable spur to climb – a very nice gradient which felt a little like climbing stairs, with some scrambling right at the top. 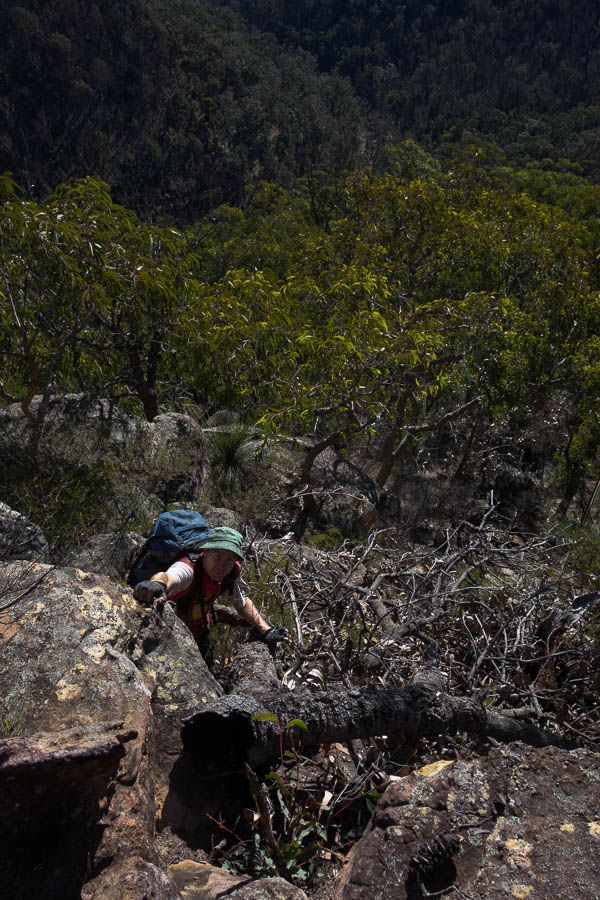 Final hill of the trip

The ridge itself was gorgeous and had great views. But by this point Tom was worn out (I was doing slightly better). Unusually he was less than enthused about a small detour to visit a trig. 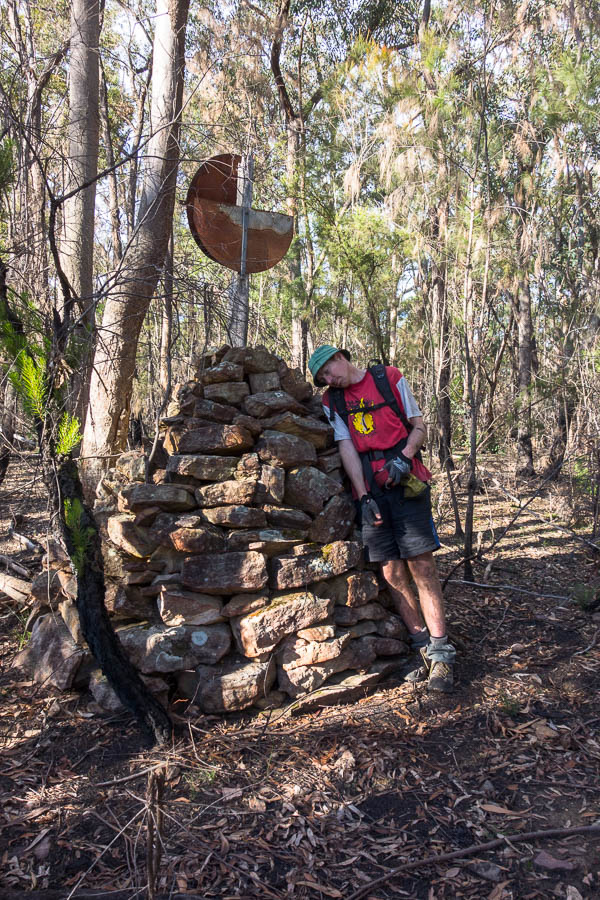 I think Tom is worn out

Eventually we arrived back at the car after 3 pretty hard days. We were a bit surprised on our drive out to find a gate across the road which we hadn’t noticed on the way in. It was shut but automatically opened for us to exit. Not sure if we got exceedingly lucky that it was open when we drove in at the start – certainly would make the access a lot trickier!