After a few days at my school reunion (Part II) we were ready for the next part of our trip. We left Mkushi early on Sunday morning to drive to Kariba. We had a much better trip to Lusaka compared to the way up – a lot less traffic as we were earlier in the day. We had lunch at one of the big malls in Lusaka – they were very impressive – you could have been anywhere in the world! 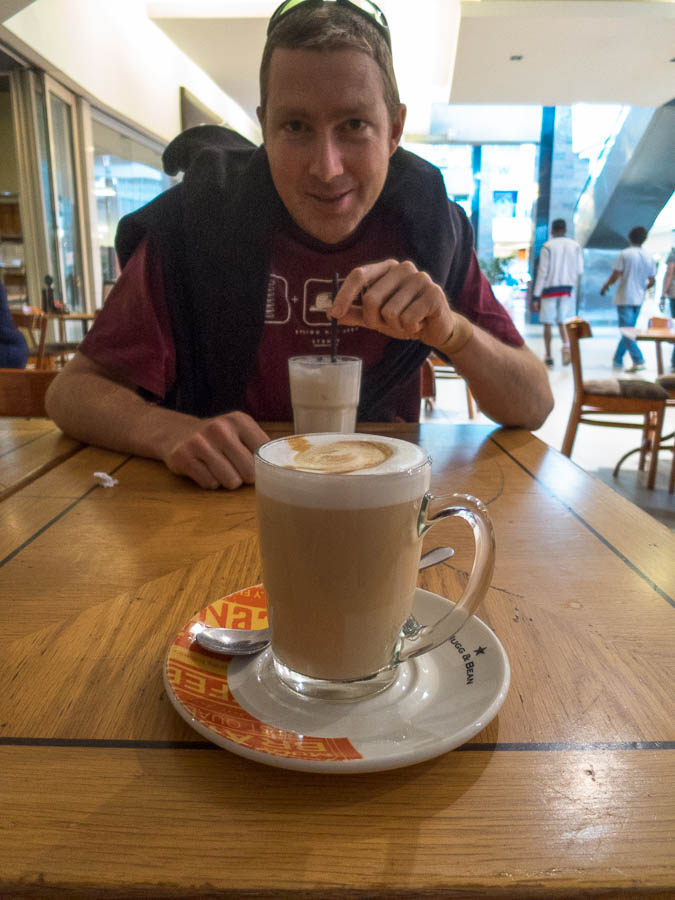 Lunch stop in one of the several large malls in Lusaka

Then we still had a few hours drive to the border post at Kariba Dam. The border formalities went relatively smoothly. As we were taking our hire car across the border there was a bit more paperwork. Everything I’d read on the internet had led me to believe we were going to be hit with large ‘taxes’ for taking the car into Zimbabwe but only US$20 poorer we were across – I’m not complaining! We finally got to where we were staying about 5pm – so an 11 hour day of travel. We got to enjoy sunset on the edge of Lake Kariba for a bit but then we needed to sort out our gear as we were starting our canoe safari early the next morning.

The canoe safari ended up being just me, Tom and 3 guides; Norman, KK and Thomas! (Thomas was a trainee, normally it’s just 2 guides to a trip with up to 8 clients). We started off with a shopping trip for any additional beverages we wanted and then we had a few hours drive to Chirundu. 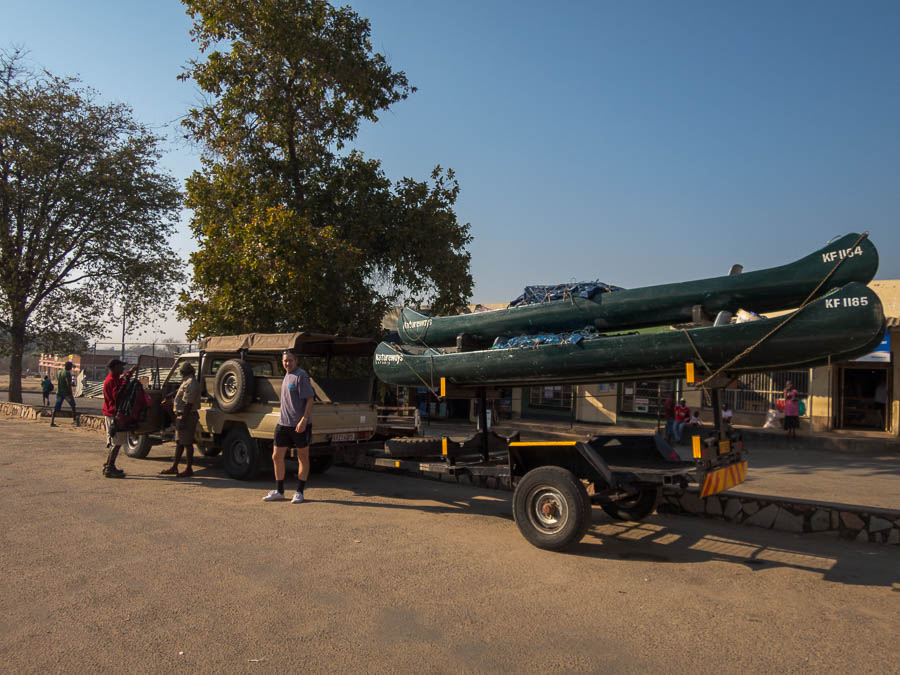 About to leave Kariba Town 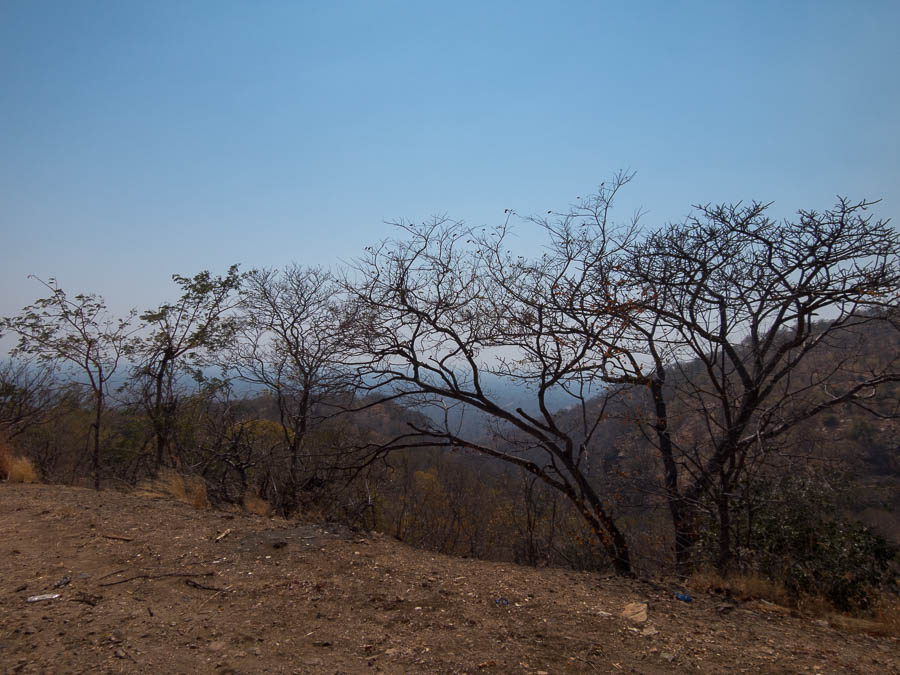 Just as we were about to start heading down the Zambezi escarpment one of the guides got the driver to pull over. It seemed the bearings on one of the wheels on the trailer had gone. After a bit of chat the driver and guides decided we’d just keep going. We made it to Chirundu safely though the wheel looked a little worse for wear! 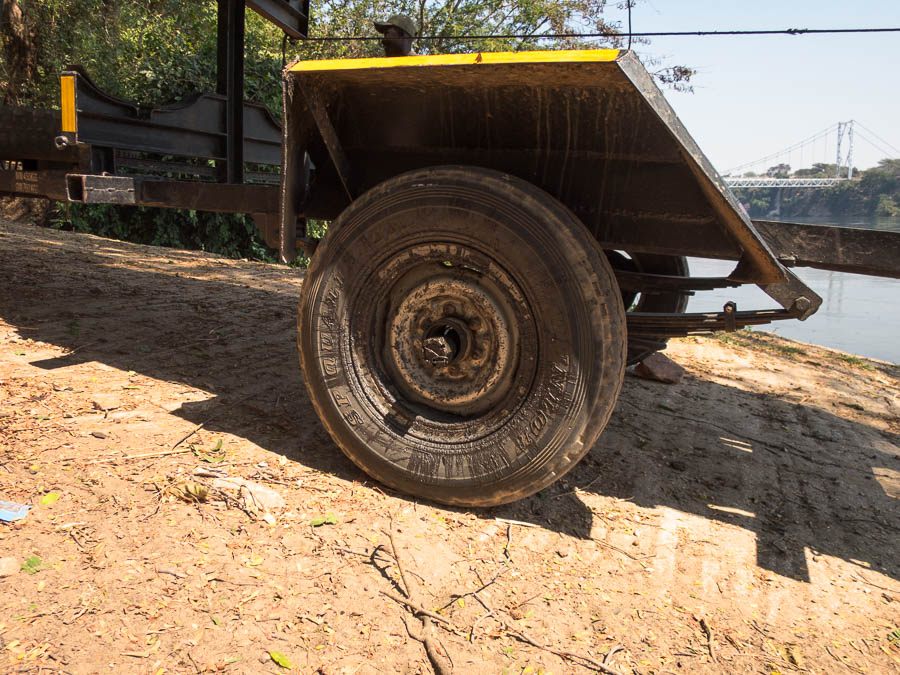 The wheel with the broken bearings in Chirundu

We had lunch on the riverbank while the canoes and gear got sorted out. KK found us some Baobab fruit to sample. They were quite nice. 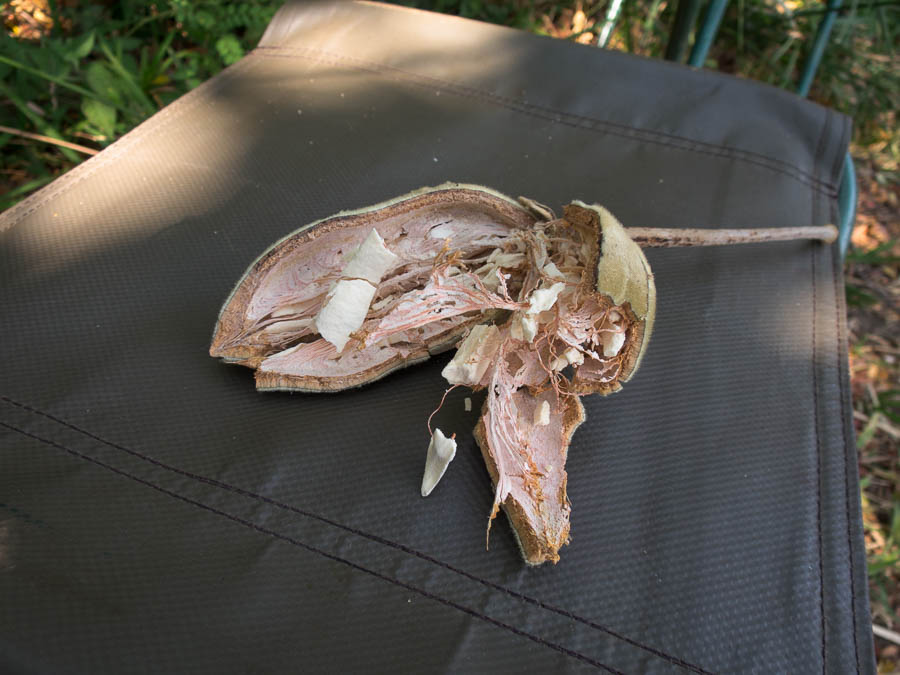 Baobab fruit – quite tart but tasty

With the guide to client ratio as it was Tom & I both got to go in a canoe with a guide which made things pretty relaxing as all we needed to do was paddle (sometimes) and they did all the steering. Norman told us he normally tries to split couples up in the canoes otherwise they tend to not enjoy the trip. 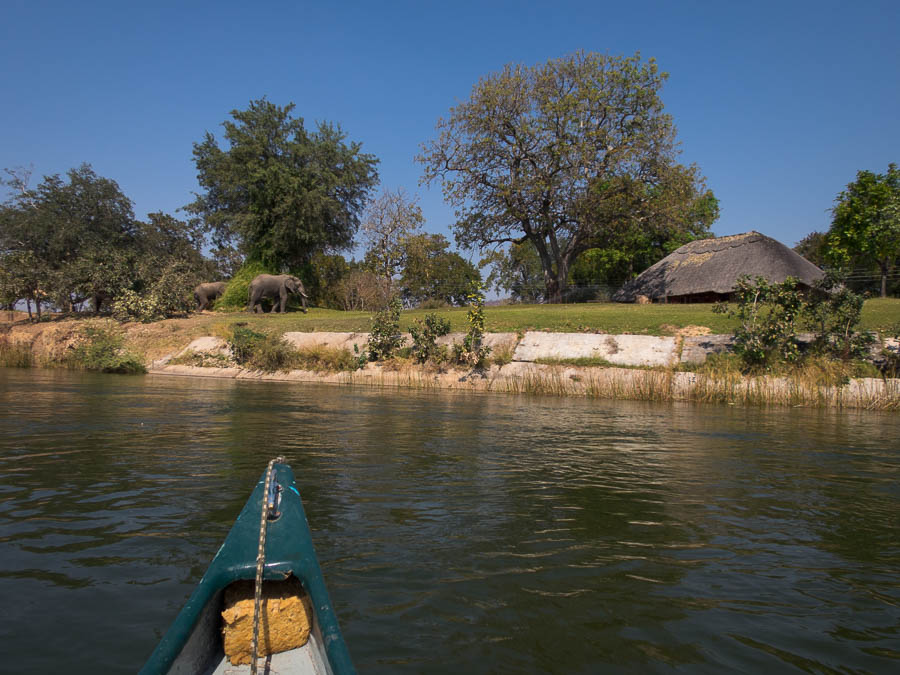 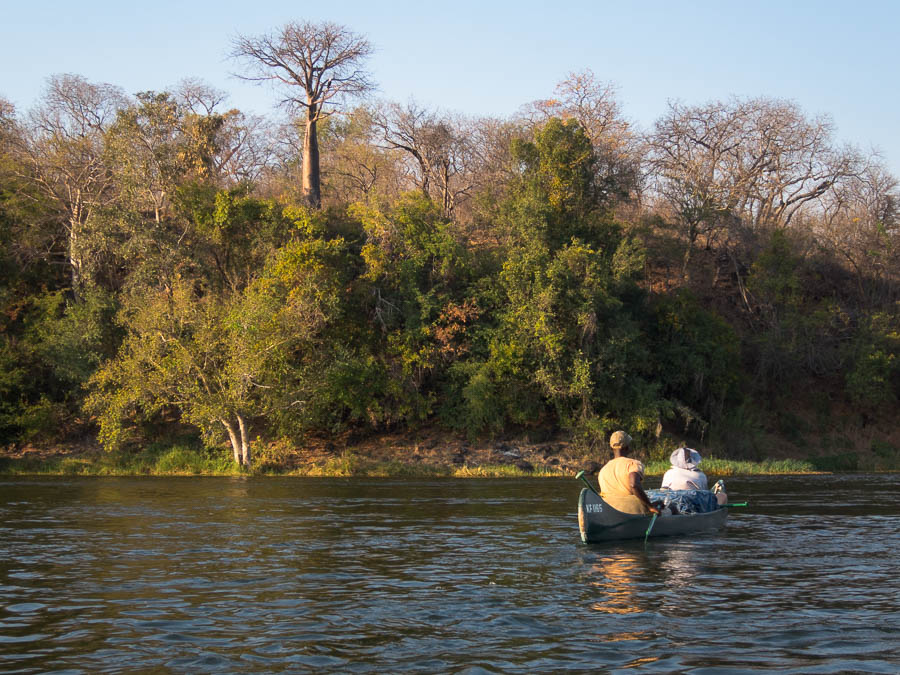 Photographer, baobab, fish eagle (in the tree) = match made in heaven 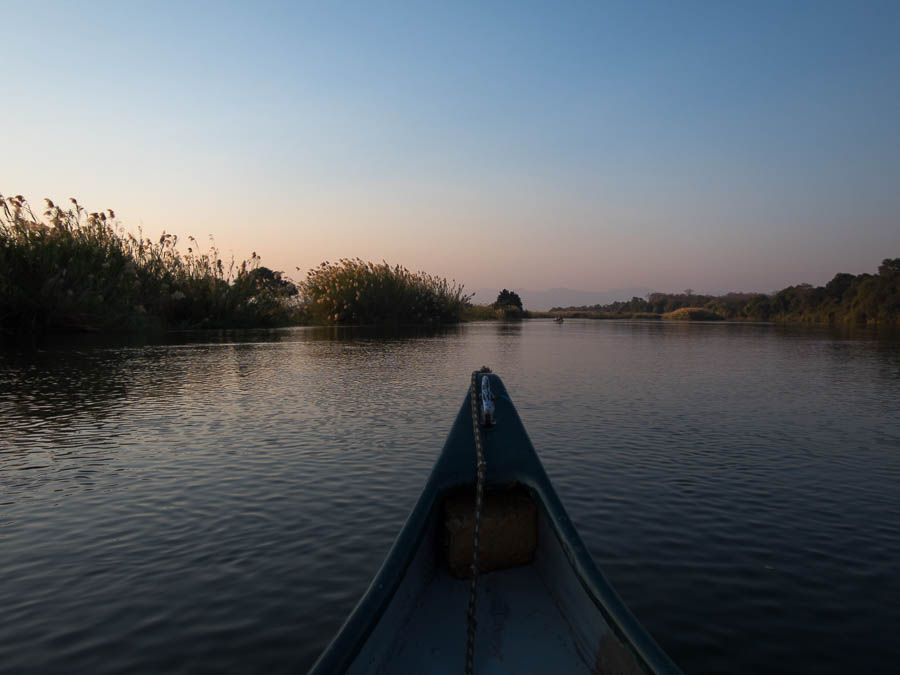 The first day was fairly hard for non-conditioned paddlers like us. We did 4 hours in the canoes without stopping (~25km) so by the time we pulled into our island for the night our bottoms were pretty sore. I was beginning to wonder if I’d got in over my head! 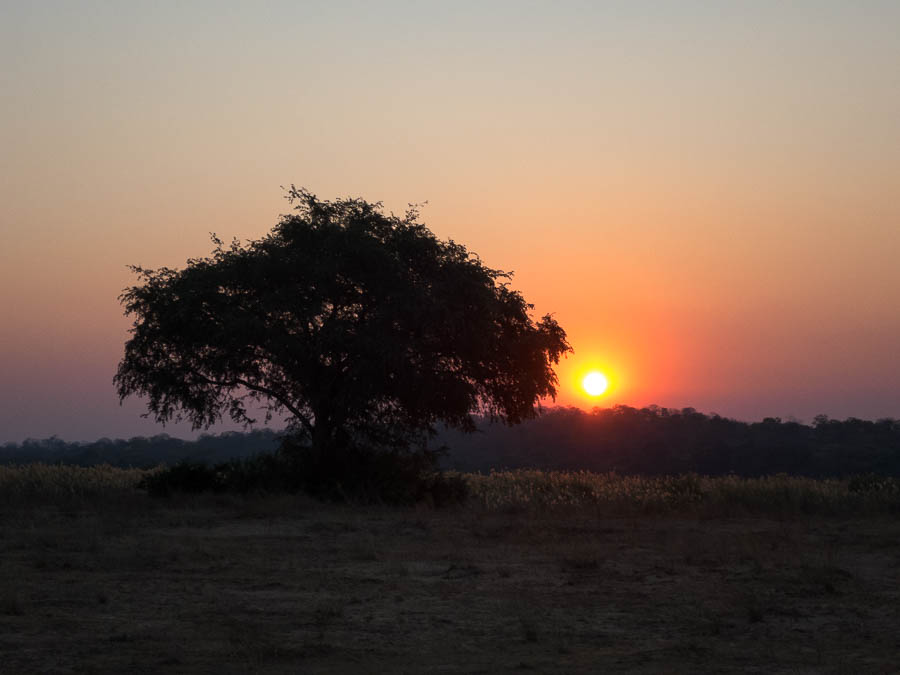 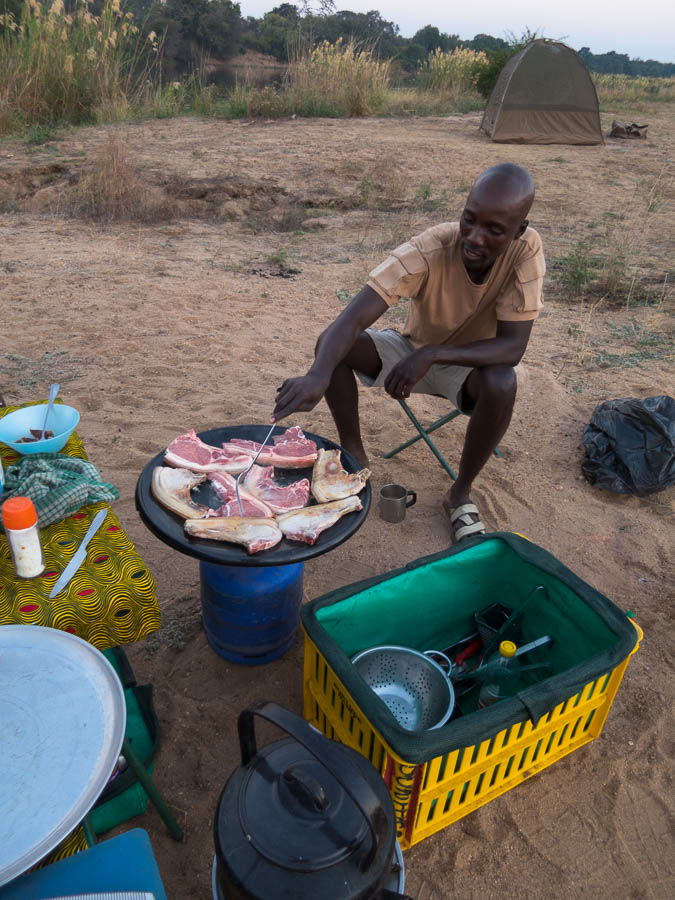 I was more relaxed when I realised we’d done almost a third of the distance on the first day. Day 2 was another 25km day – but done over 3 stints so more chances to stretch out. We started the day with hot drinks and biscuits. 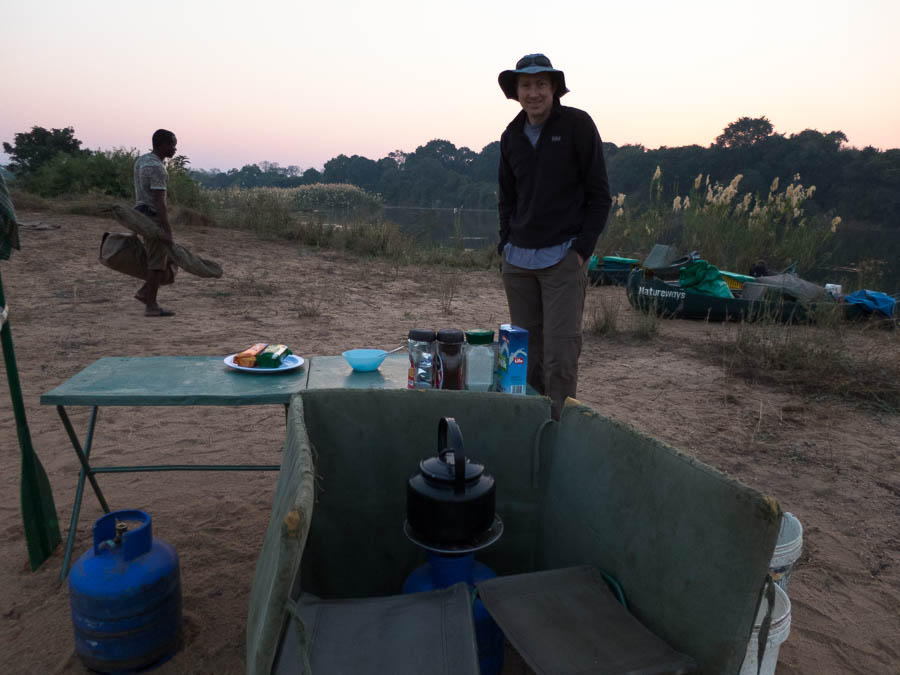 Some serious wind shielding for the kettle! 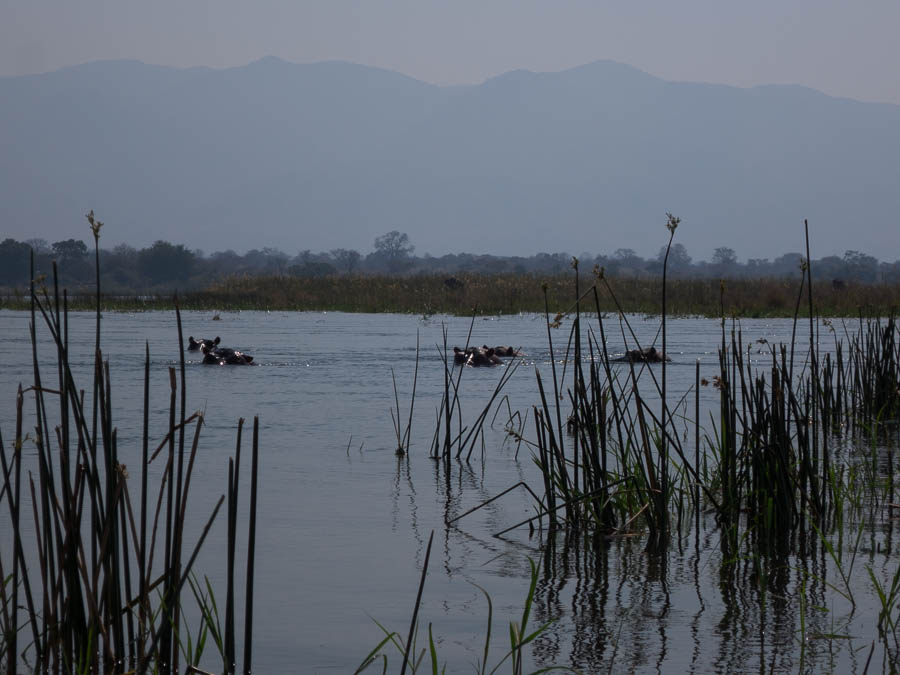 The hippos were always lurking 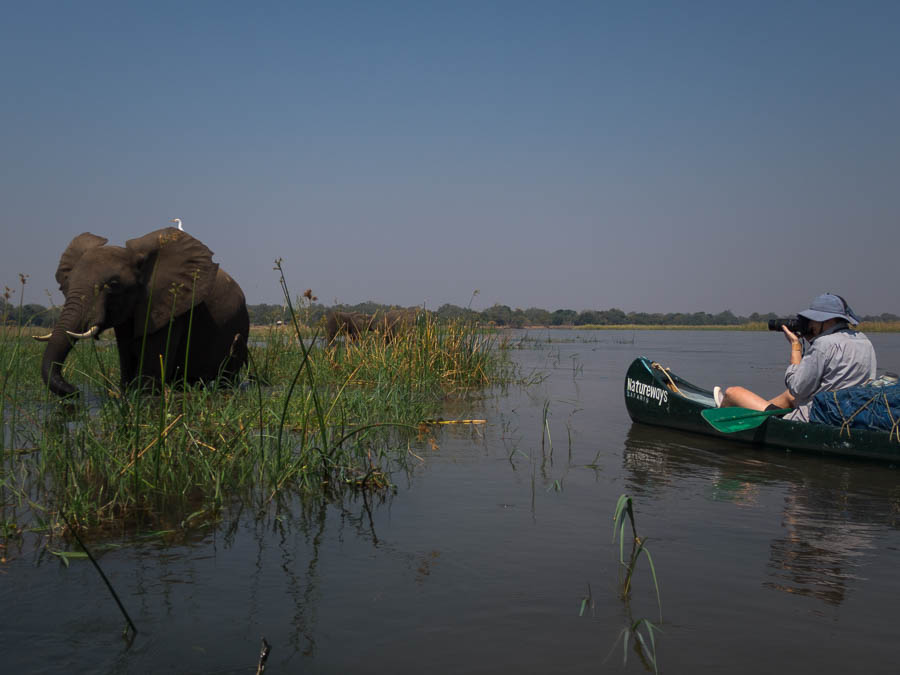 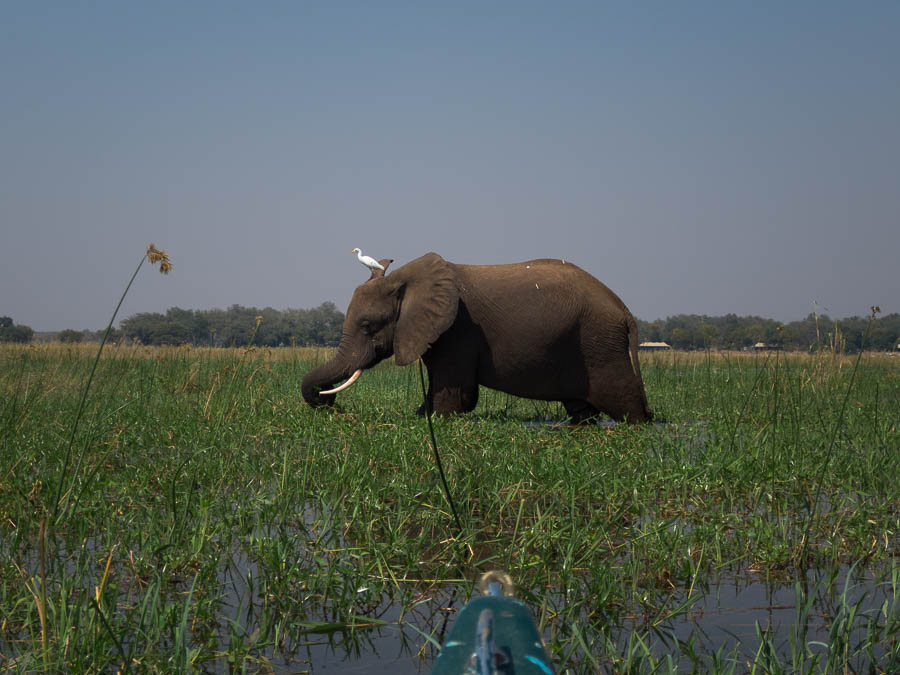 We had breakfast after a couple of hours of paddling, then lunch a bit later. Hippos were ever present so the guides were always on alert to make sure we took the best route around them. Our lunch spot was down a side channel, and there was a large pod of hippos on the shore next to where we needed to go. Hippos want to be in deep-ish water when feeling threatened so a bit of slapping the paddles on the water got them all moving. 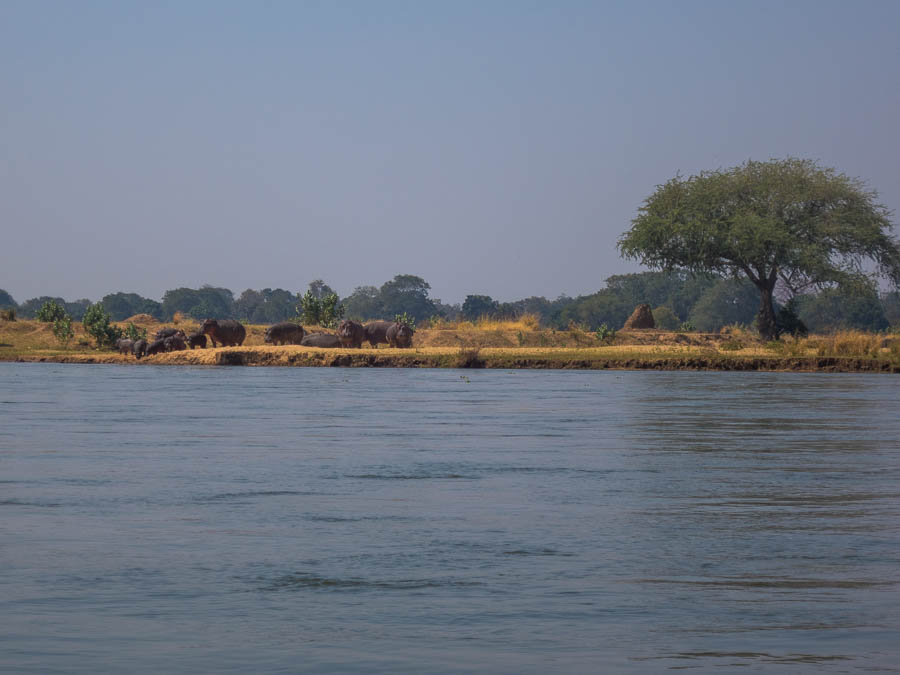 We’re aiming for the tree on the right… just go to get the hippos out of the way first! 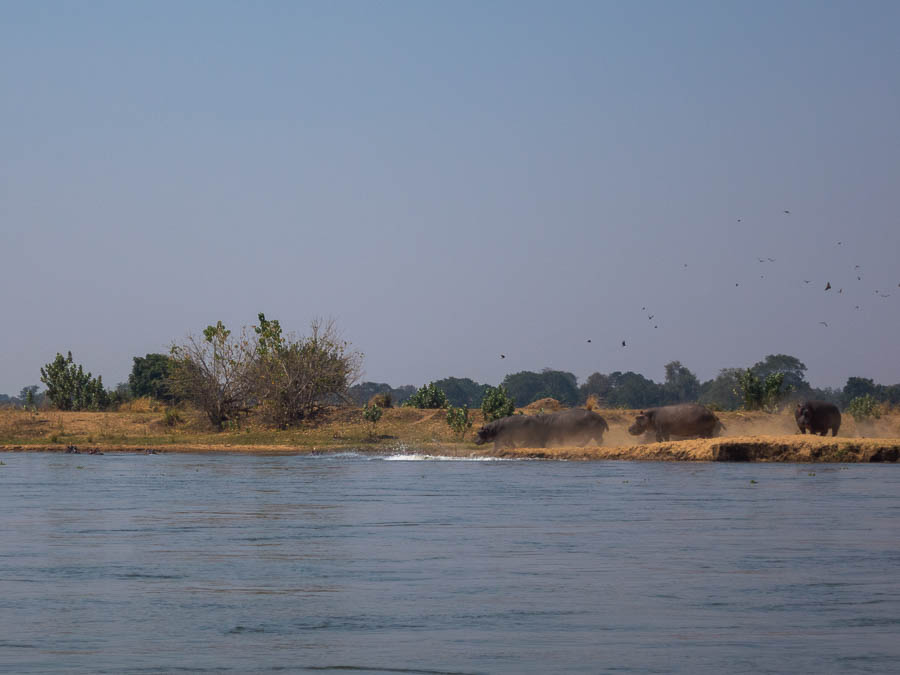 And they’re off! including all the birds off their backs

As soon as they were in the water we zipped through the side channel entrance that had been full of hippos only moments before. We had lunch and a long break in the heat of the day before our final stint of paddling for the day to camp. 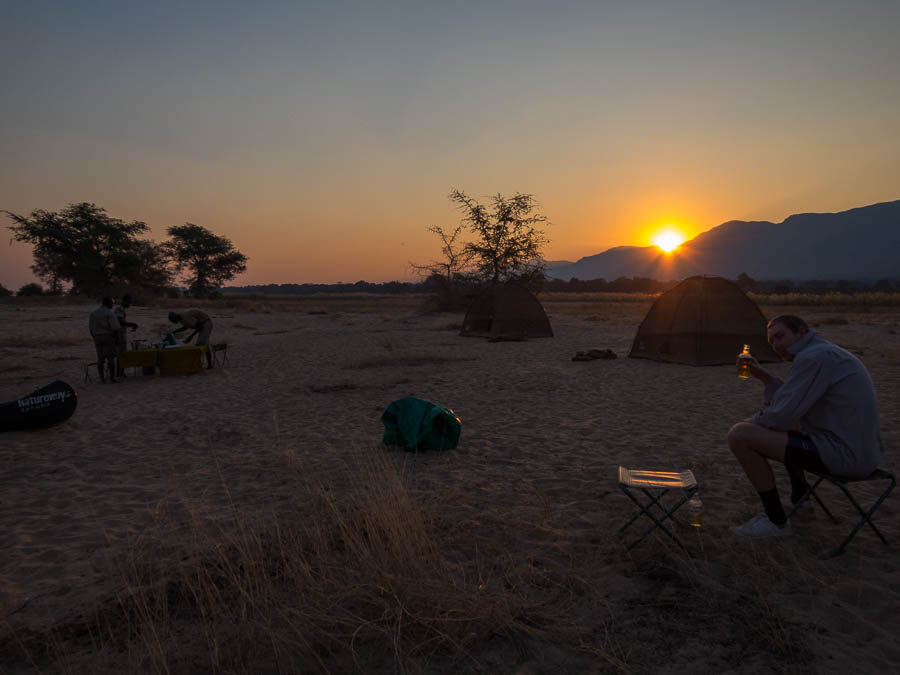 As we’d done half the paddling in the first two days the third day was fairly relaxed. We followed the pattern of the previous day but drifting more and paddling less. 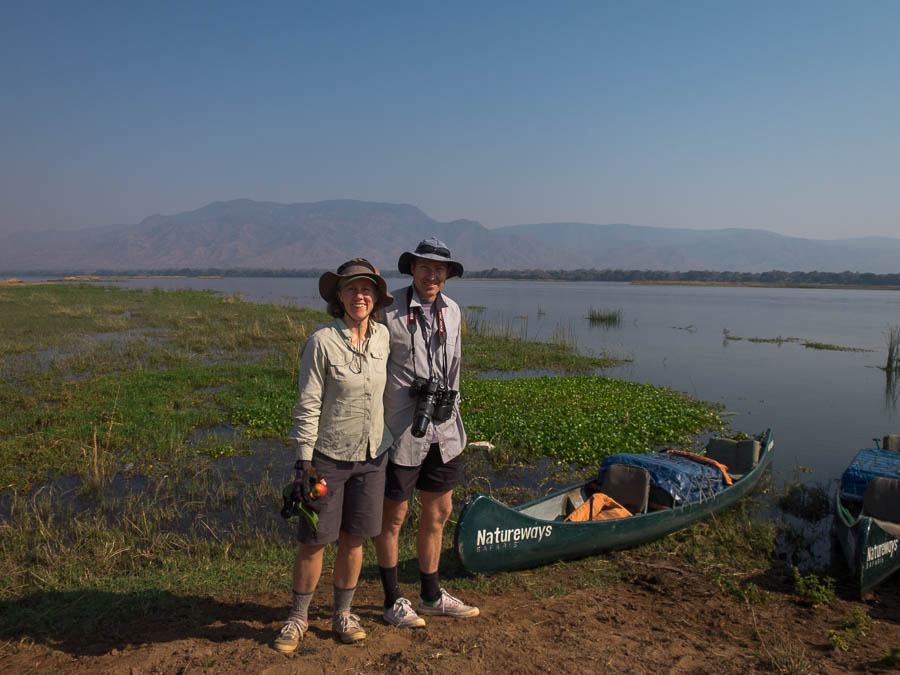 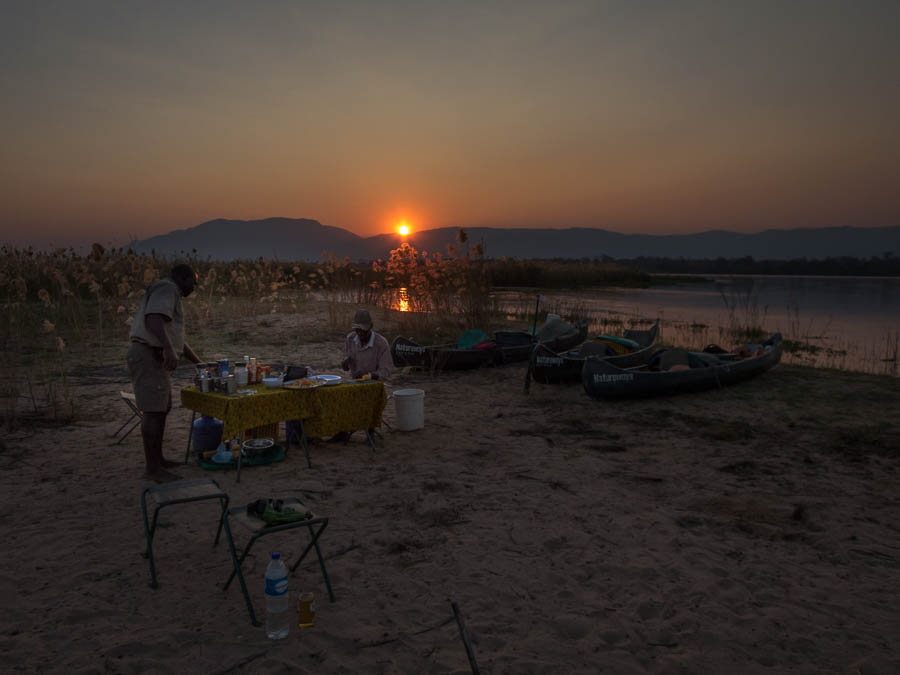 The final day was only 8km so we covered that in about an hour. Then there were trailers to load at Mana Pools, more National Parks paperwork and then a long drive back to Kariba.

(If I was planning this trip again, knowing what I know now, I would have looked at a provider on the Zambia side as it would have saved us both driving time and border crossing time and expense. That is in no way meant to reflect poorly on the company we went with – more that we probably could have saved ourself a day or maybe more of driving.) 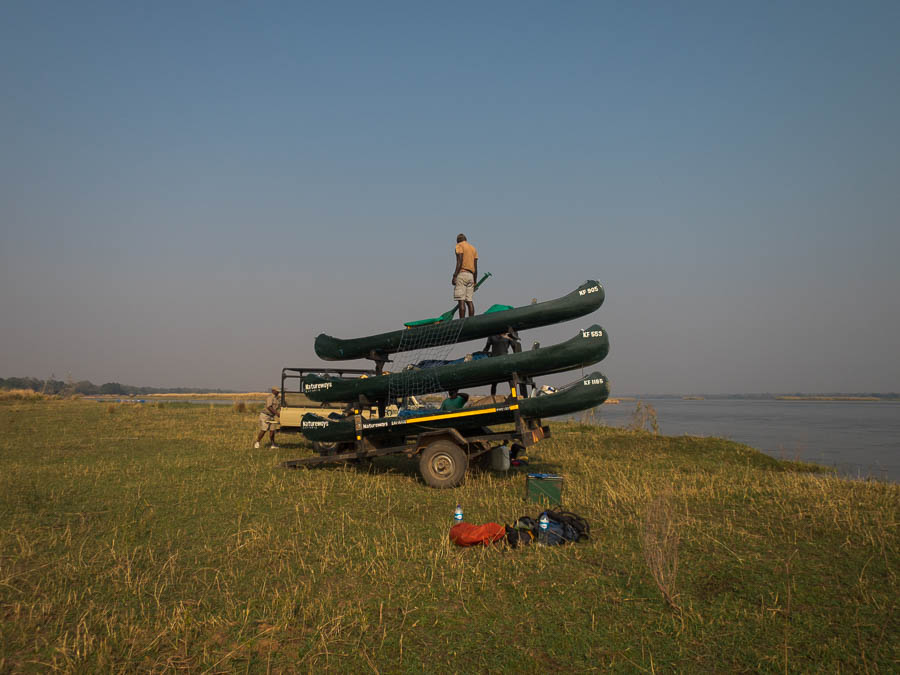 And before we know it that’s the end

The drive out of Mana Pools was made unpleasant by the presence of Tsetse Flies which have a fairly painful bite. And similar to the March Flies in Australia they need to be well and truly squished to kill them. We were all pretty glad once we were back on the escarpment without them. 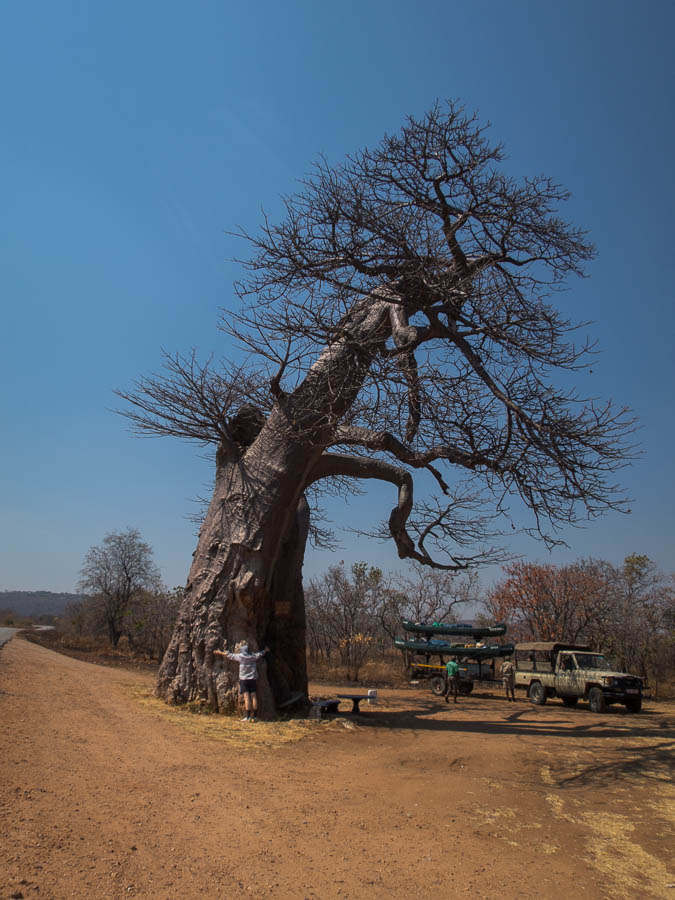 Lunch stop on our way back to Kariba

Once back in Kariba we had border formalities to go back to Zambia (Siavonga). I thought maybe all these ‘taxes’ were going to come on the way out – but other than a K20 (A$2.70) road toll we got through unscathed.

Our original accommodation provider couldn’t take us so other arrangements had been made on the Southern Belle – a moored houseboat on Lake Kariba. Probably an upgrade from what I’d booked! 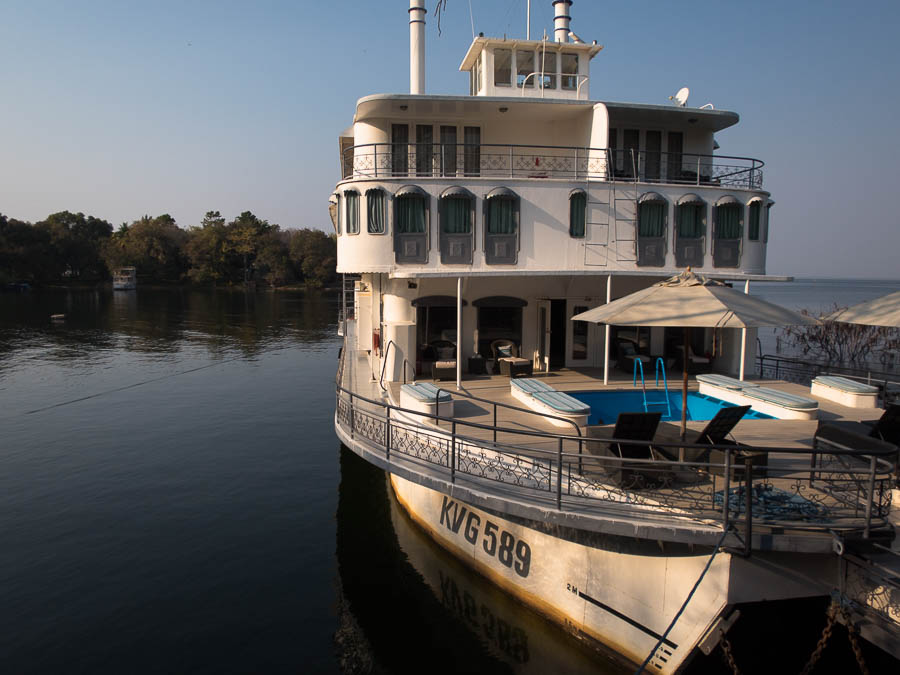 For a while it appeared we might have the entire boat to ourselves, but there was another group of 4 guests. Of which 2 turned out to be the parents of one of my school friends who I hadn’t seen since 1994! Such a small world. 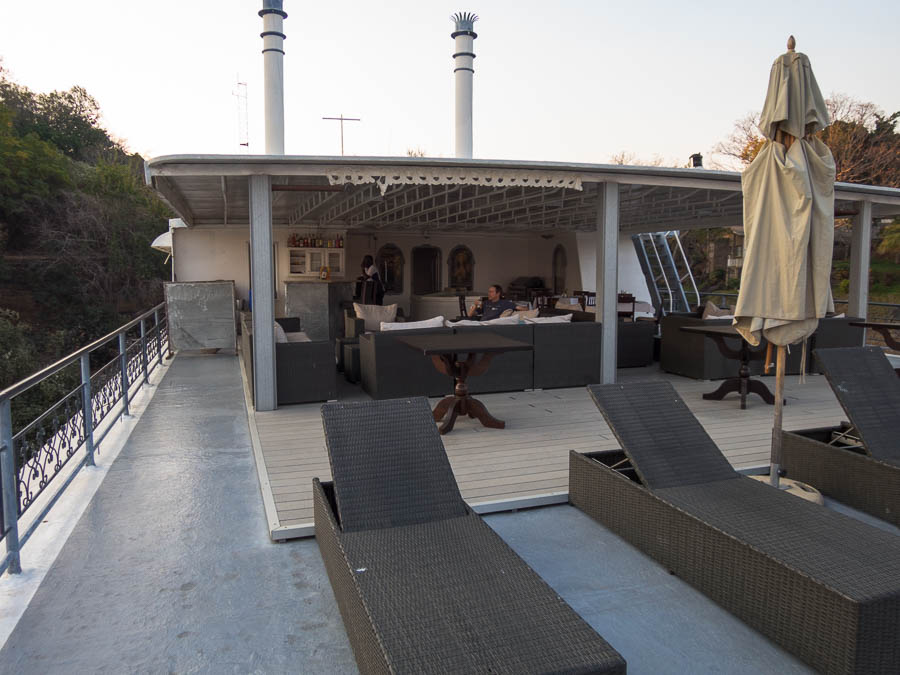 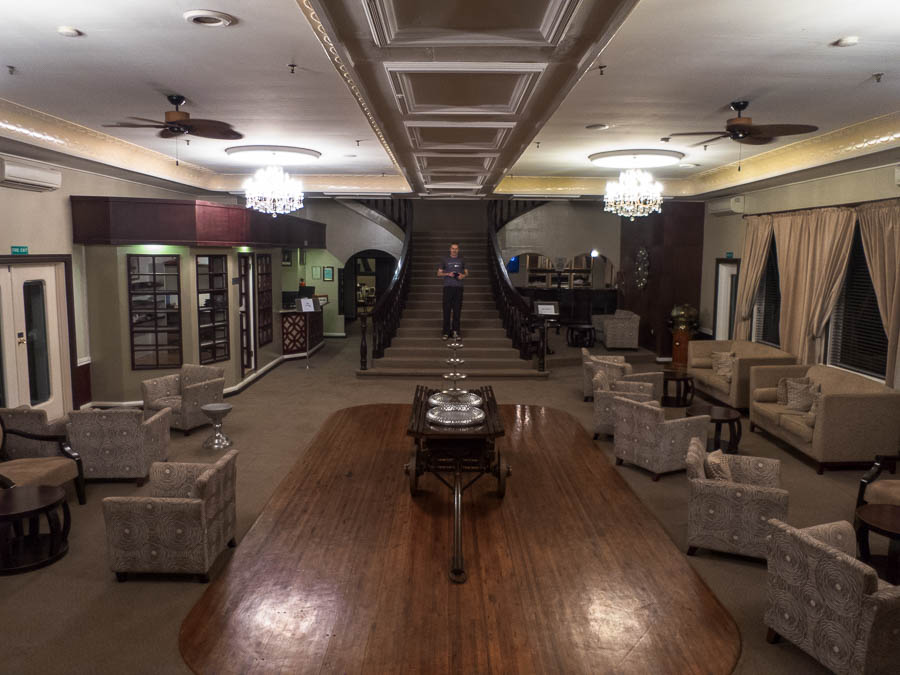 From Siavonga it was back to Lusaka. And primarily for the location north of the airport we stayed at a small ‘game park’ just out of town. Having done ‘proper’ safaris in Namibia and Botswana this wasn’t particularly exciting though they did have some gorgeous cheetahs. 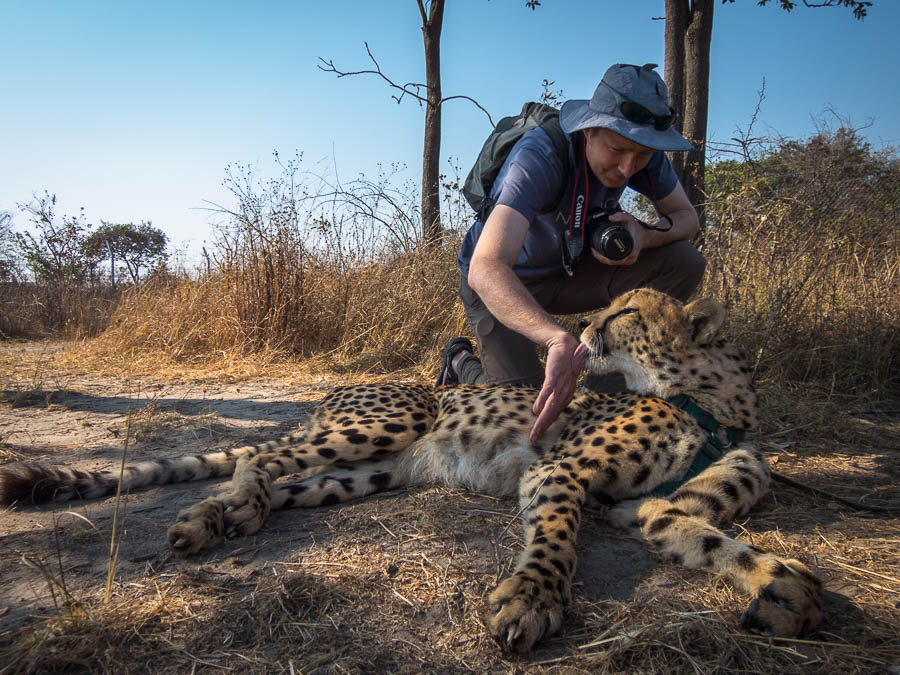 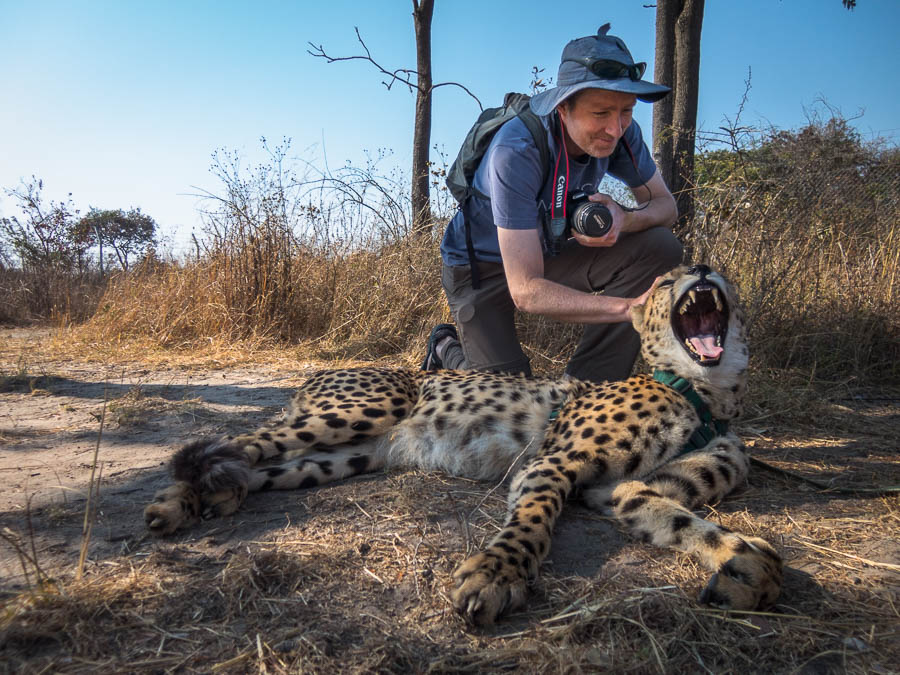 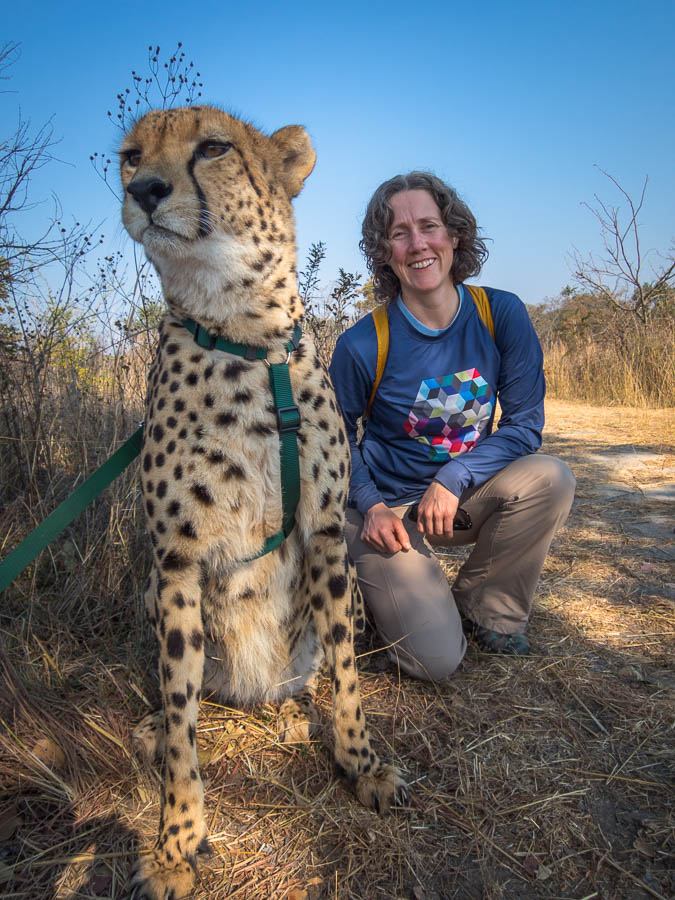 Rachel’s found one too

Of course when we got on the plane there was an article in the in-flight magazine about how these sorts of animal interaction experiences should be avoided due the exploitation of the animals, unhealthy breeding industry which it promoted etc. I’d like to think the story we got told was true – that the cheetahs had been found as orphans – they’d been at the property 6 years. I would’ve been happy just to watch them as we haven’t seen any cheetahs in the wild during our African adventuring, but as evidenced below we got quite a lot of interaction.

And thus ended our Zambian adventure.