Having learnt our lesson after 2013 we didn’t plan to go anywhere the day we arrived in the US. It was just a day of buying food supplies, canyoning gear (knee pads!) and sleeping. By good fortune friends of ours from Australia were finishing their trip the day after we arrived so we were able to get water containers, leftover food and various other supplies from them. Following a good nights sleep in a hotel away from the strip and we were ready to head for the canyons!

With a waffle-machine at breakfast, general slowness in getting ready and the time change between Nevada and Utah, it wasn’t particularly early when we rolled into Zion National Park. Deciding two (albeit short) canyons was probably a bit ambitious given it was after 1pm we just picked up a permit for Keyhole Canyon. Our first time through Keyhole, it’s super accessible with the walk in and out being <15 minutes. This was the perfect canyon to do to remind ourselves how to canyon – remembering of course we were coming off the back of winter and our last canyoning had been in April. We were warned that Keyhole was ‘full’ by the wilderness desk and we must wear wetsuits. Not sure where the swims were – Tom got through without getting more than waist deep. From there we headed to Zion Ponderosa Ranch. We couldn’t resist having dinner in the restaurant rather than cooking – beautiful steaks – our last for a while. 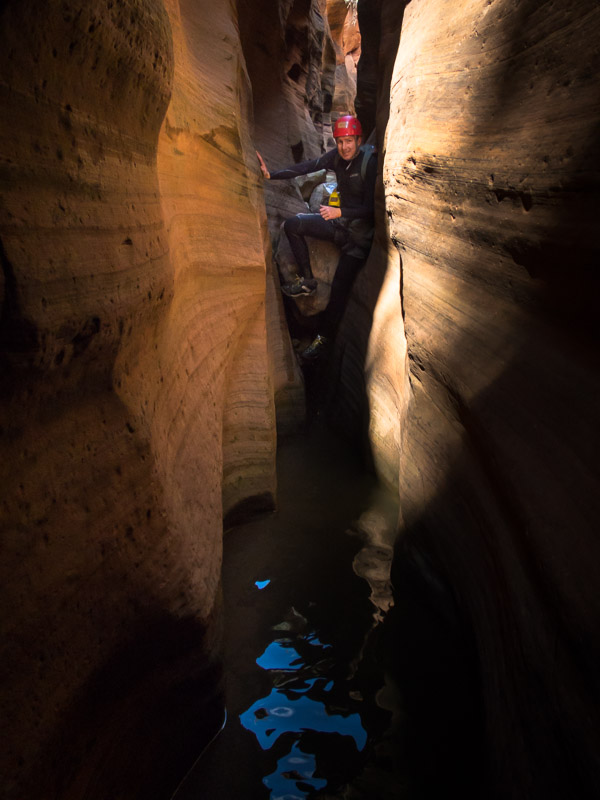 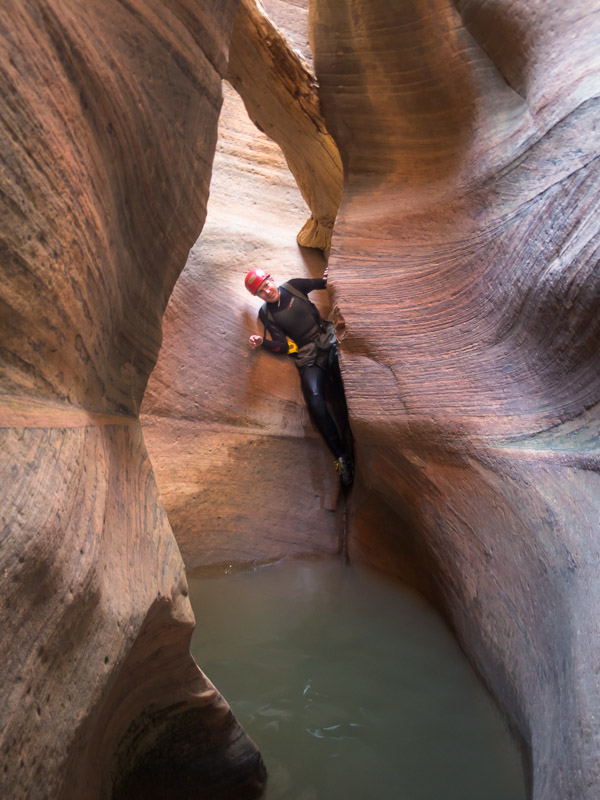 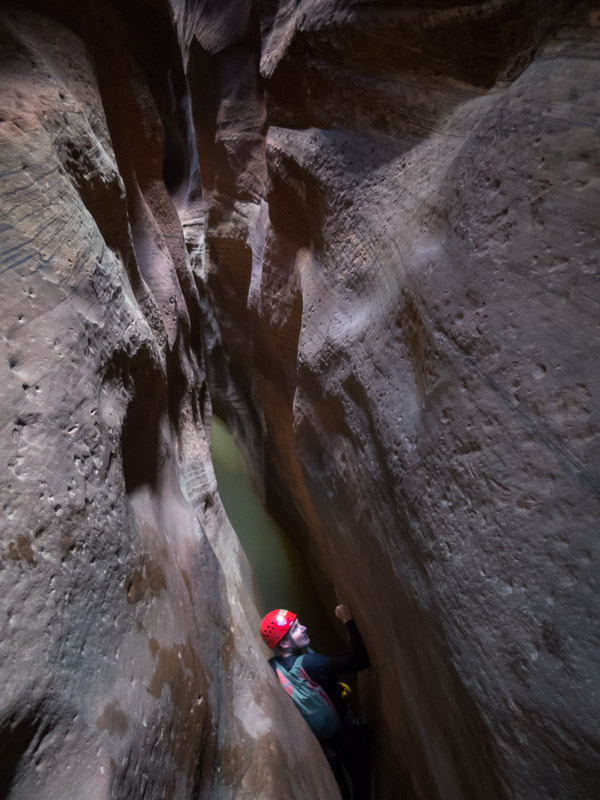 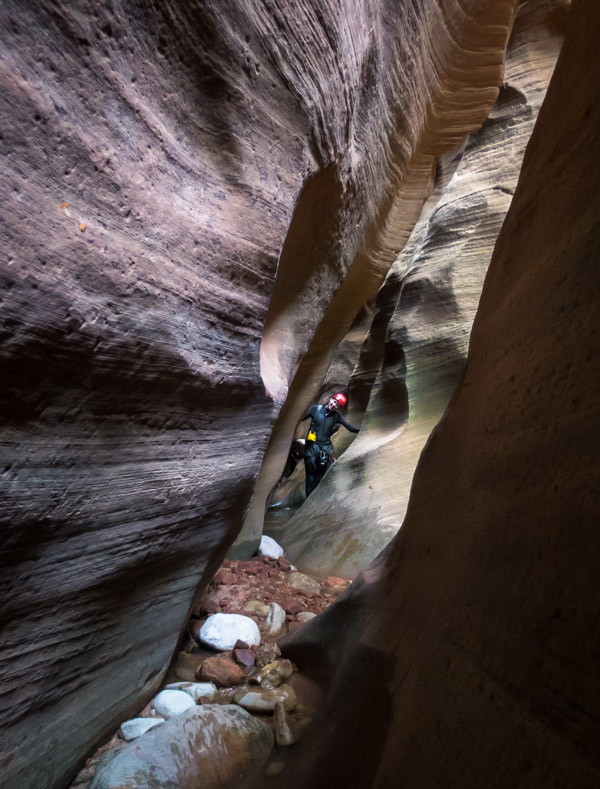 The first of many slanted corridors for the trip 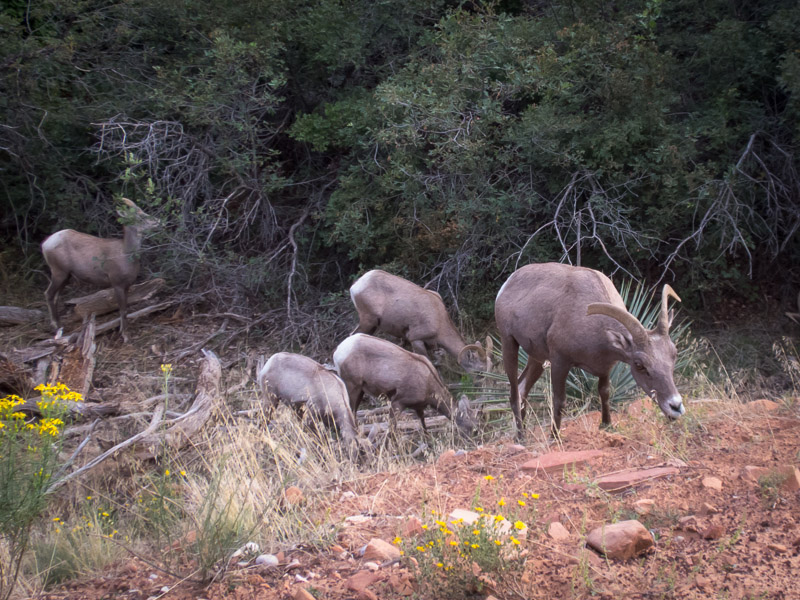 Big Horn Sheep on the side of the road

The next day was one of our longer ones. We drove out to the Chamberlain Ranch Trailhead and started walking down the Virgin River. This is where people doing the Narrows as an overnight trip start. But that wasn’t our goal. We exited up a gully – which our notes did say had a couple of up-climbs. The first one was a bit tougher than we were expecting – but then we hadn’t yet got back into the groove of how grippy the rock is here. Nonetheless we made it up and over into Deadeye Dick canyon. 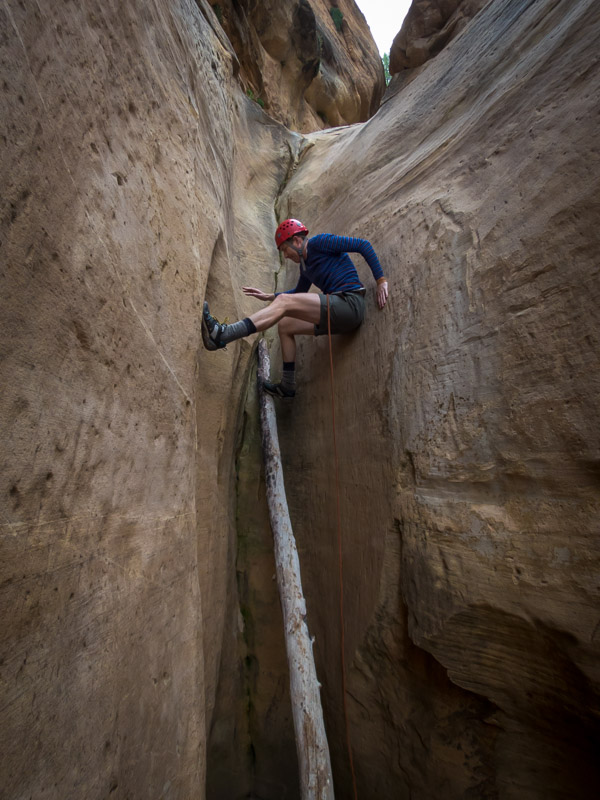 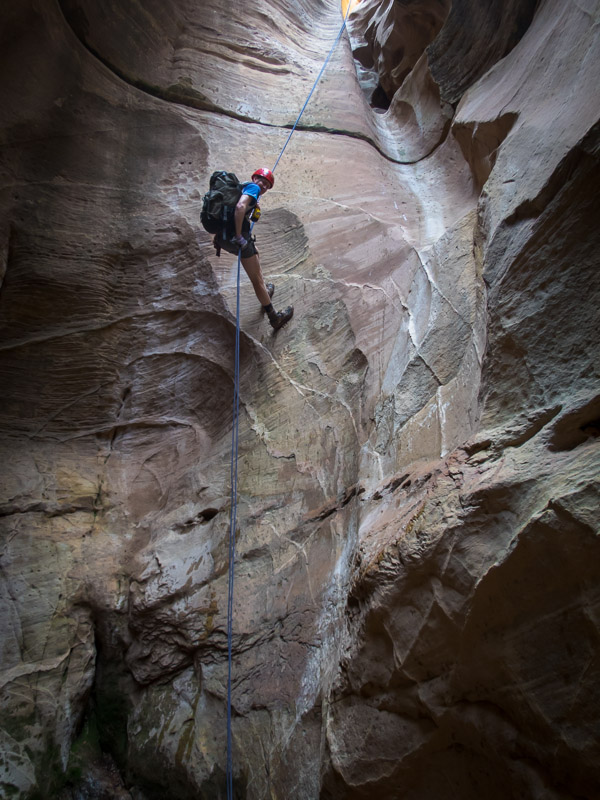 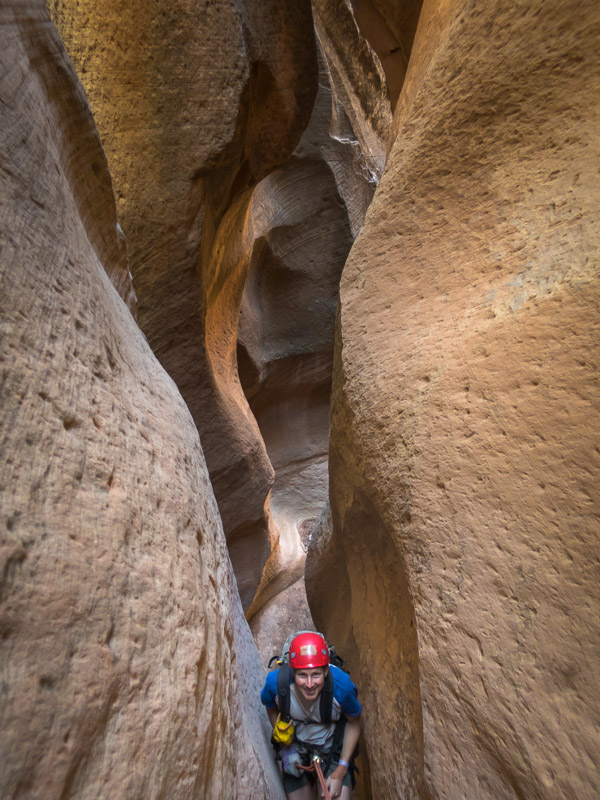 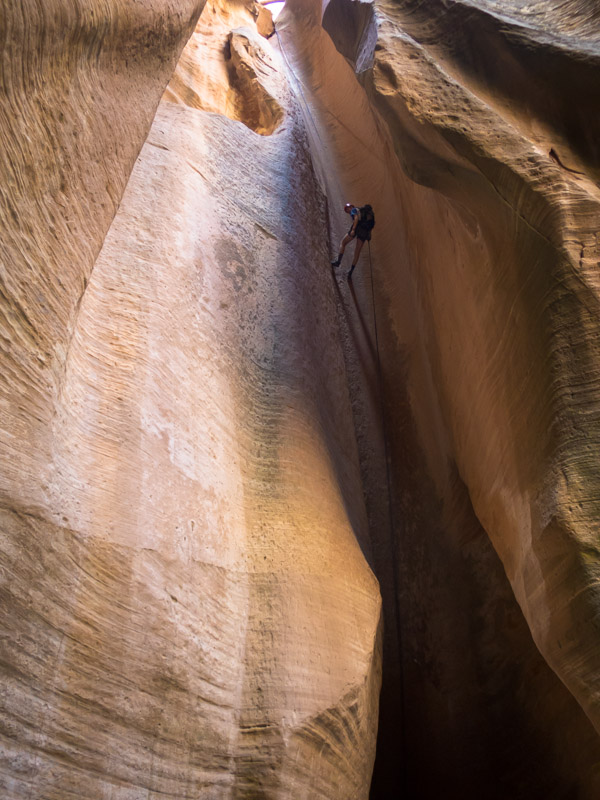 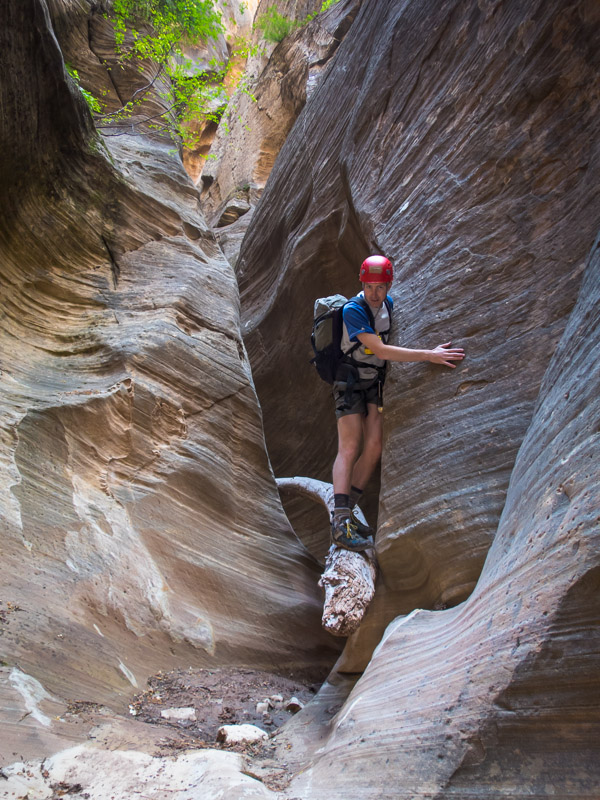 Nearing the confluence with the Virgin River

Then a late lunch on the Virgin River before a quick run through Mighty Mouse canyon, then back to the car. A very satisfying first day. 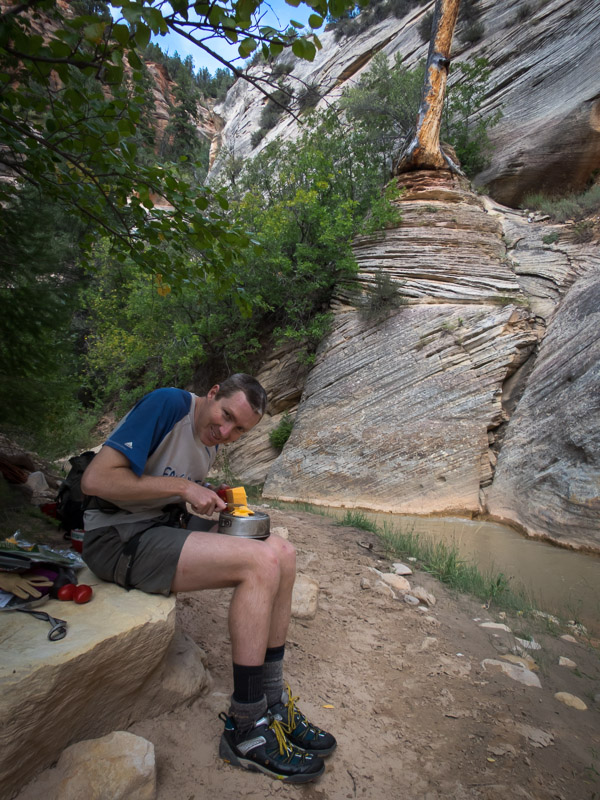 Lunch on the Virgin River, with makeshift chopping board 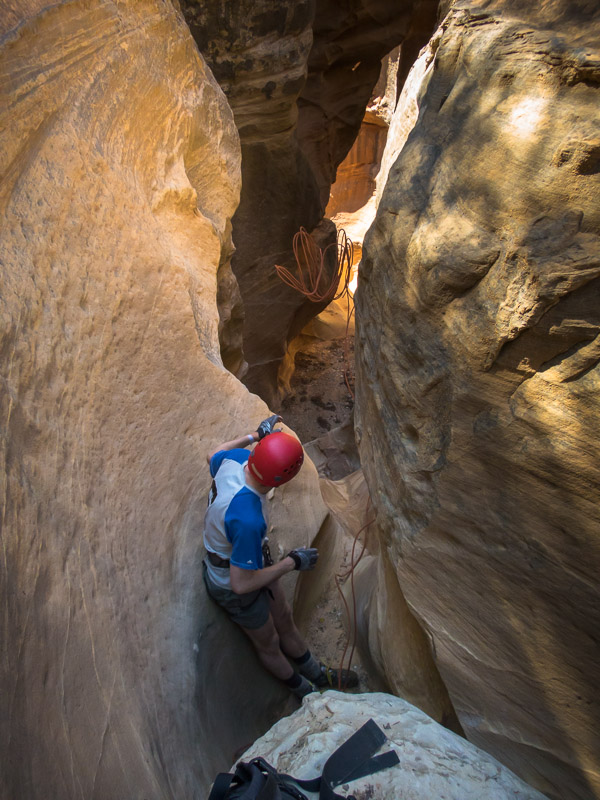 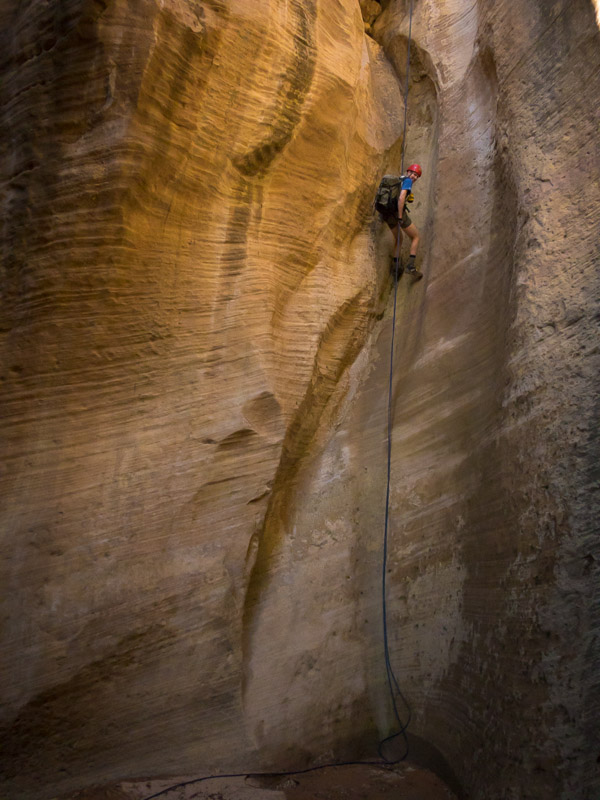 We had a second night at Zion Ponderosa. We had planned to do Boundary Canyon the next day – which was going to be a long day, as it was a couple of hours drive to the trailhead before even starting what was a reasonable day out. I wasn’t too disappointed when in the early hours of the morning, when we were both awake (jetlag), that Tom said his foot was sore and he wasn’t up for the long day. Getting to sleep in was great but then we needed a new plan. We settled on a short canyon nearby called Diana’s Throne. It was fairly busy, as it is a good beginner canyon outside of the park (so no permit needed). It seems to be popular with the guiding companies as well. After spending a while giving some rope-coiling/management tutelage to a guy we met in the canyon we caught up to a commercial group. The guide mentioned another canyon we could do at the end – this was a great tip and made the day a bit longer. Not sure whether the slot has a name but it was a fun bonus, and despite being the last group (of 4) to leave the cars we were the first back! It also gave us time to do the rounds of the shops in Springdale to buy canyoning shoes (not available in Australia…). 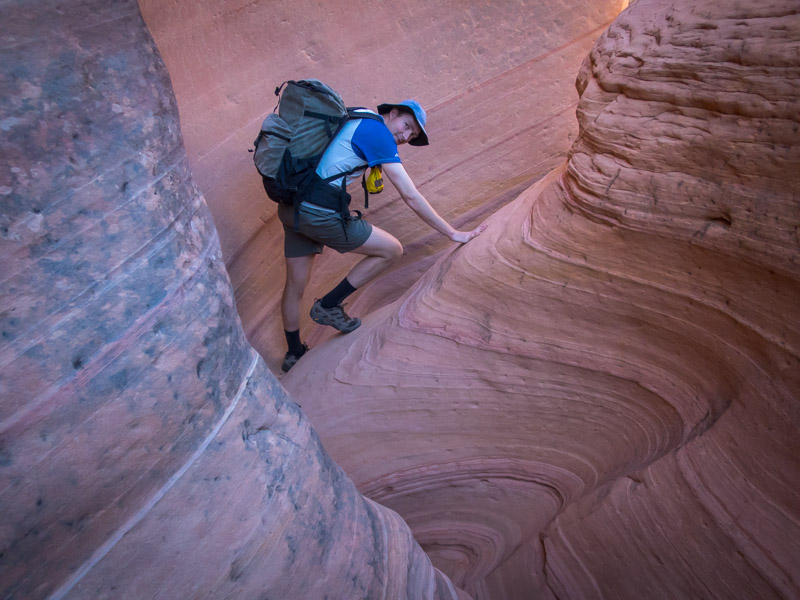 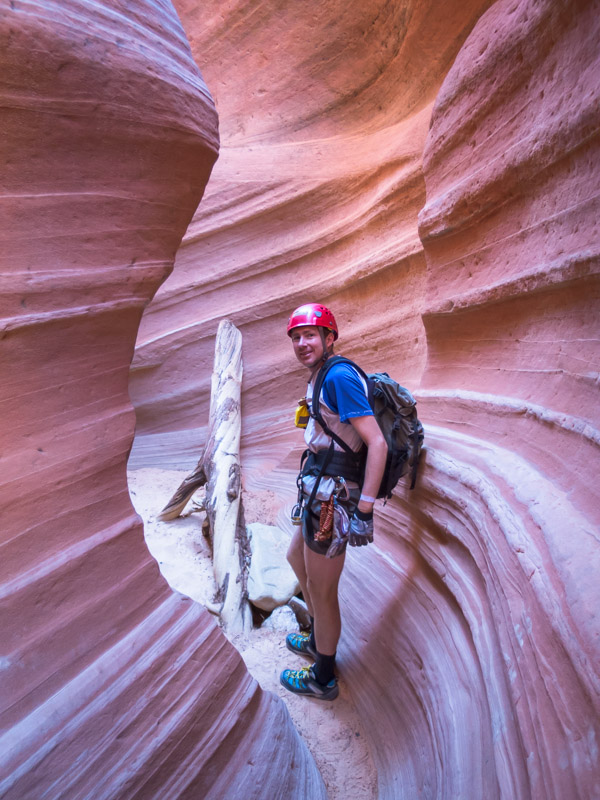 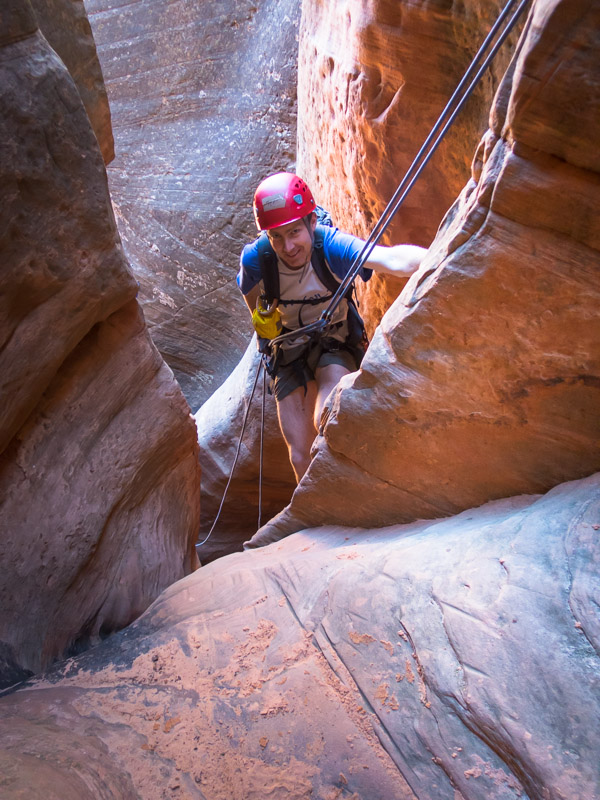 Unlike our 2013 trip where I had booked camping at Watchman Campground more than 6 months in advance this time round we only got 1 night due to a late cancellation. We were in almost the same spot as previously and it was nice to be warm having dropped from 6,500ft (1980m) at Zion Ponderosa to 4,000ft (1220m). 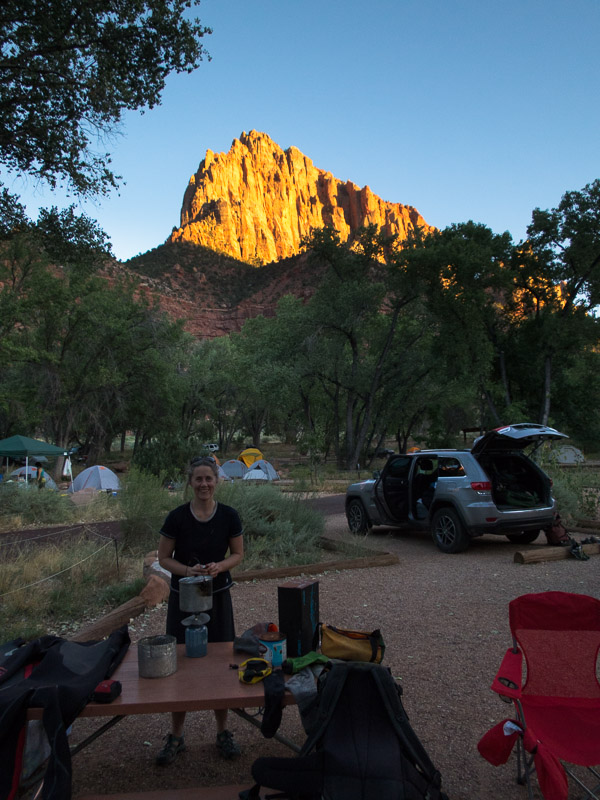 The next day it was time to move on from Zion. Kanarra Creek wasn’t originally on our plan but with Tom’s sore foot short days were going to be necessary and it looked good. I had originally thought we’d be done in 1.5-2 hours so we didn’t take lunch. Turned out we were out for 3 or 4 hours. Kanarra Creek is a slot canyon with 2 ladders installed at the only obstacles in the creek meaning it can be done as a hike. It’s fairly unusual to have flowing water in the canyons around the area and so Tom spent a lot of time with tripod and camera. 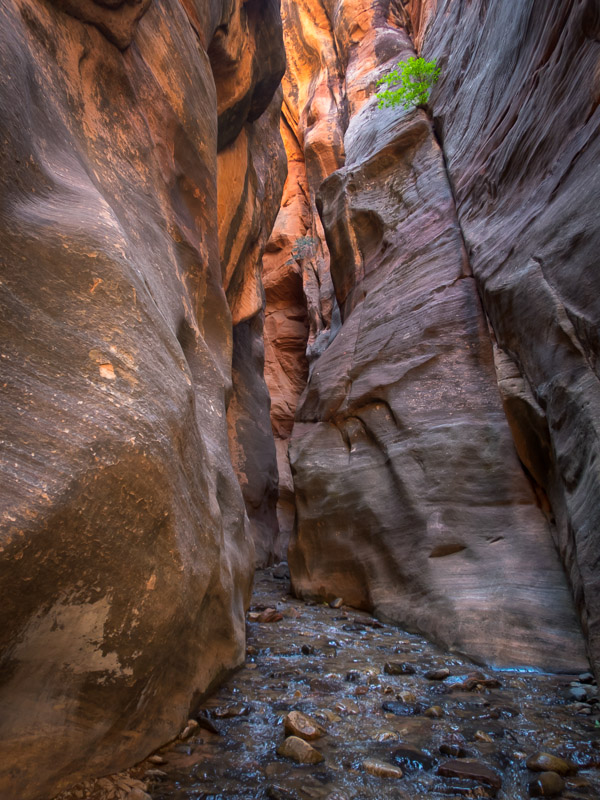 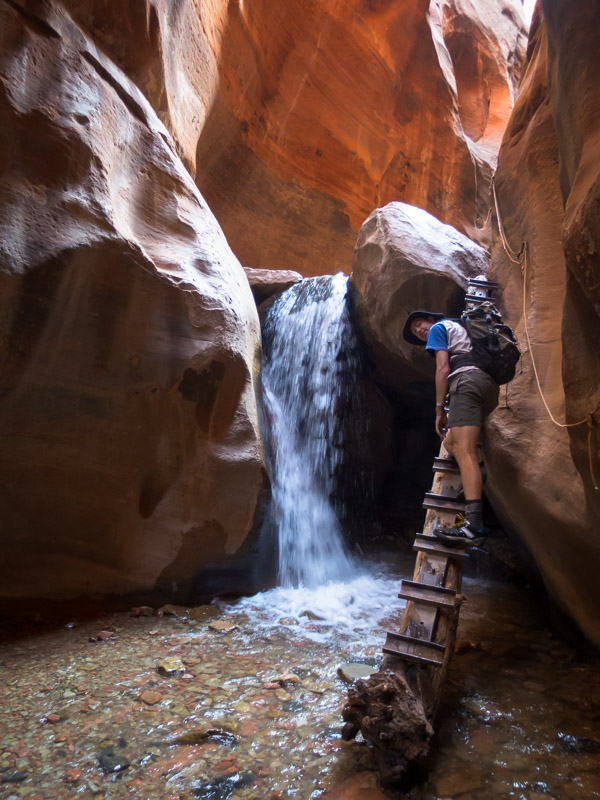 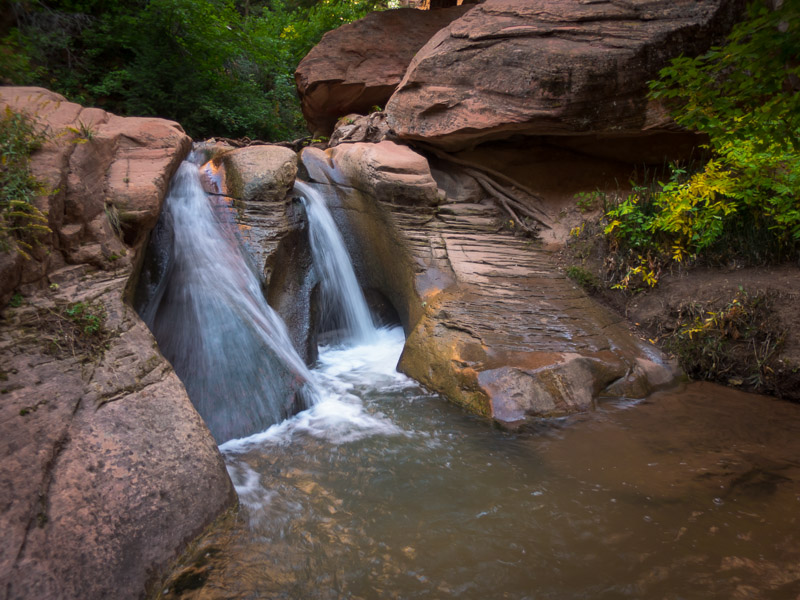 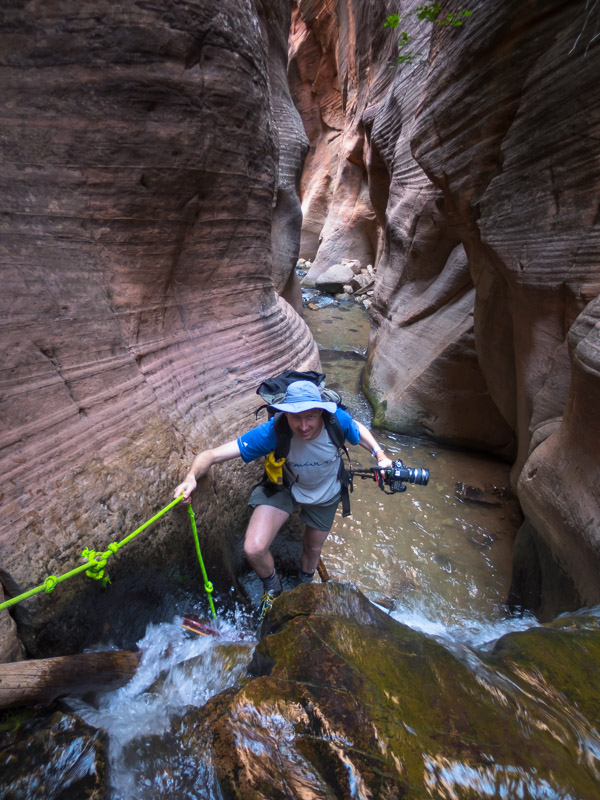 The serious photographer on the second ladder! 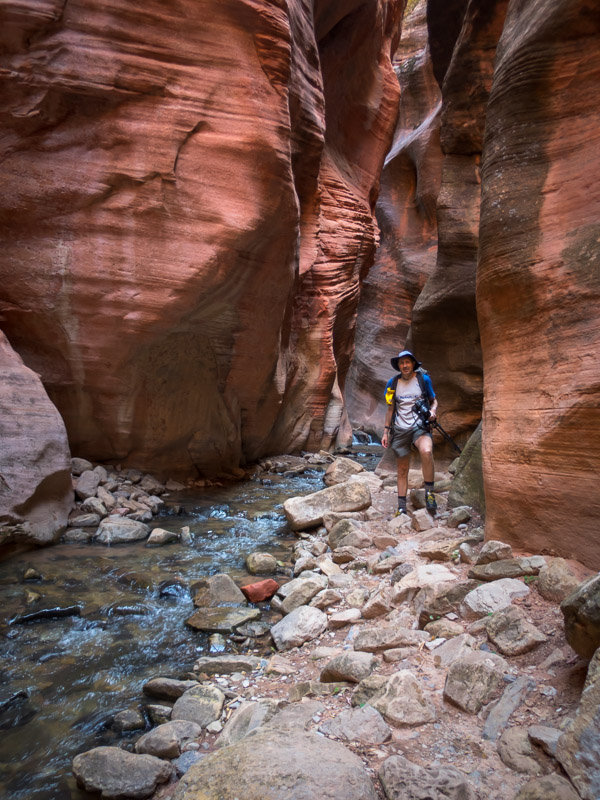 We didn’t have a plan on where to camp and ended up in the Cedar Breaks National Monument at the Navajo Lake campground. We decided this was probably the highest altitude either of us had camped at – 9,035 ft (2,754m). 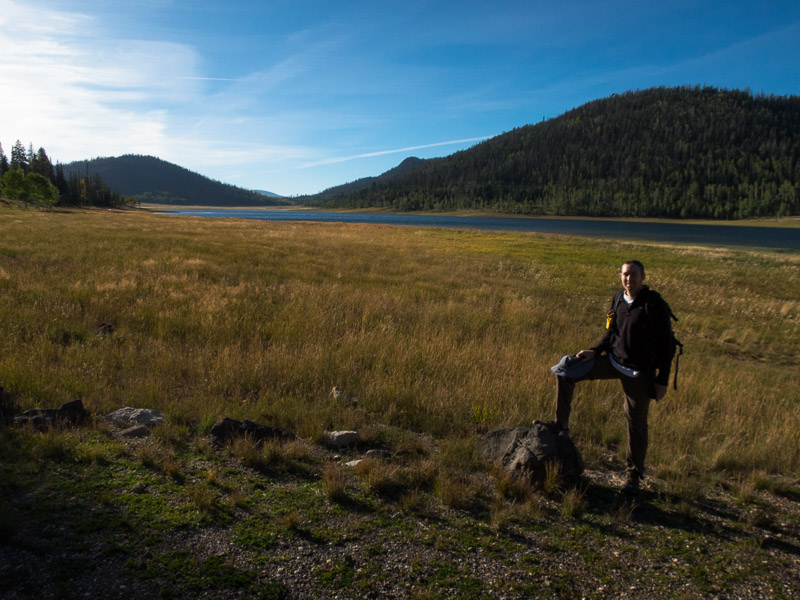