Getting to The Kimberley region of Australia is a logistics challenge in itself. For Sydney-siders like us, it generally involves flying to Darwin (having to overnight there due to the flight schedules), flying to Kununurra (maybe having to overnight again) and then some other transport to wherever you’re walking. This year’s trip was in the Prince Regent National Park, west of Mitchell Plateau. Once we finally got to Kununurra the adventure started with a 1.5hr flight from Kununurra to the Mitchell Plateau Airstrip. 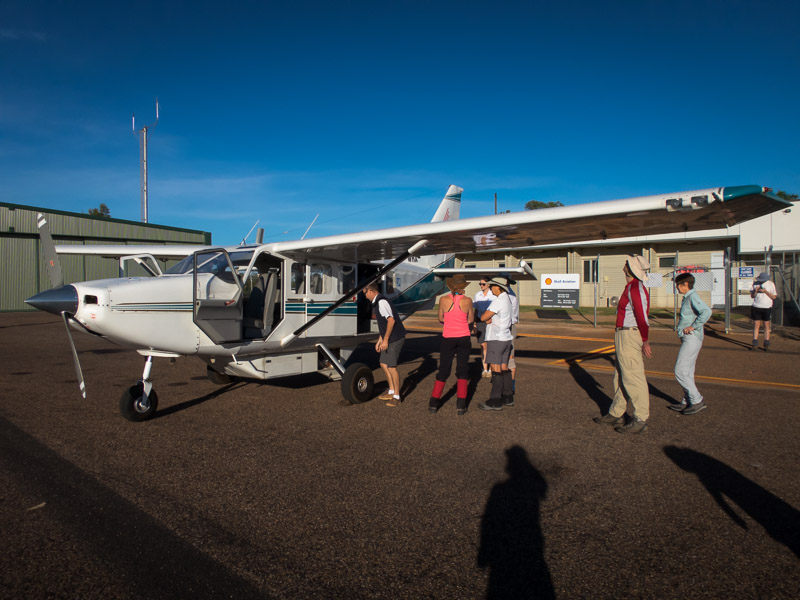 We got great views of the region on the way. 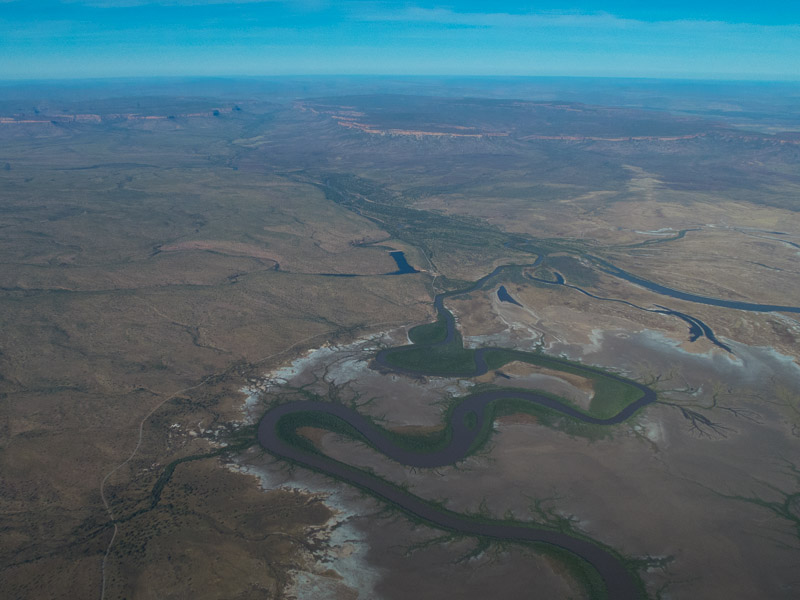 Views from the plane

From the Mitchell Plateau Airstrip we were then transported by helicopter into the Roe River, via a food drop on Garimbu Creek. We were planning to be out for 12 days/11 nights with us due to get to the food drop on night 6. 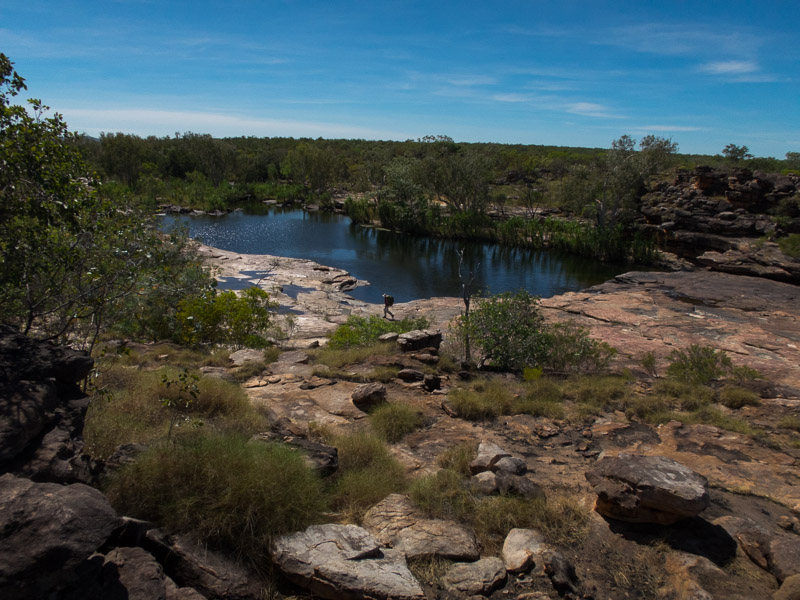 Arriving on the Roe River and our first camp site

We didn’t have far to walk on the first day! In fact we were camping where the chopper dropped us off, which was nice given our packs were full of 6 days of food. 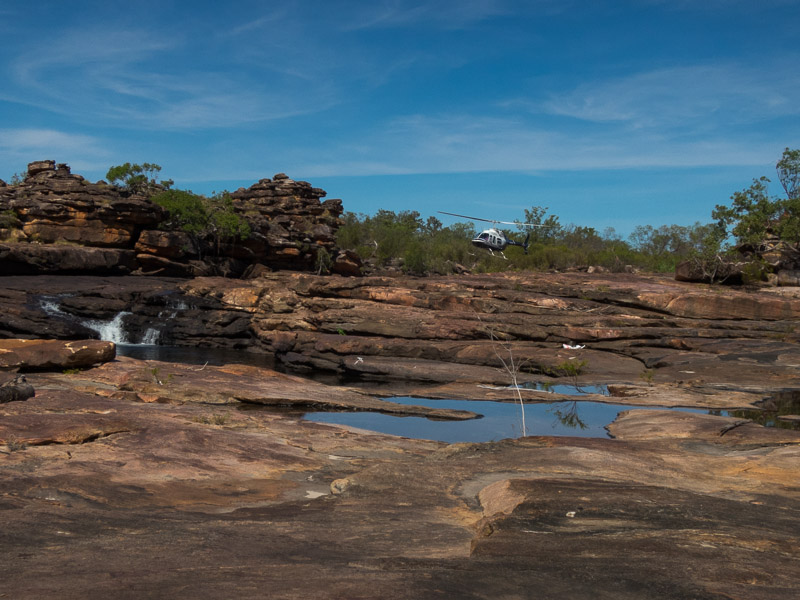 The other half of the party arriving

Day 2 we started walking down the Roe River. 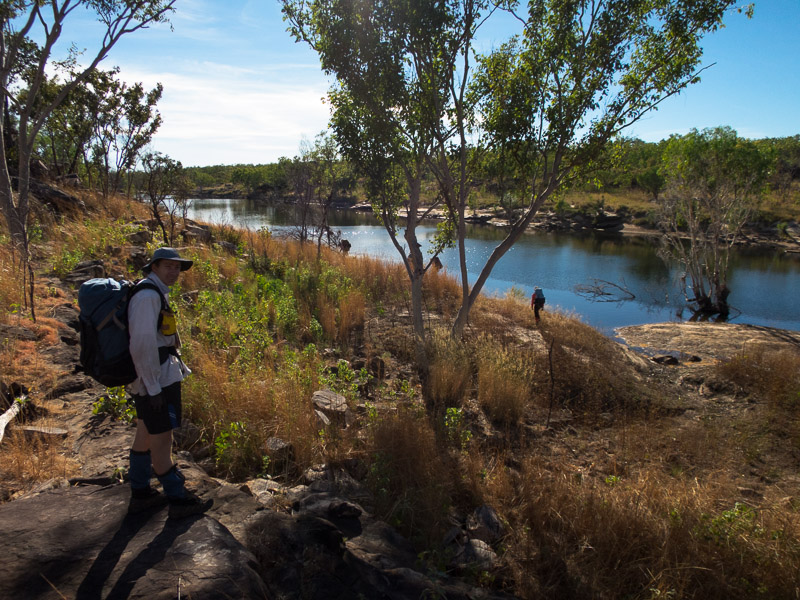 Walking down the Roe River

We didn’t get far before we hit these major falls which were a great spot for morning tea and a swim. 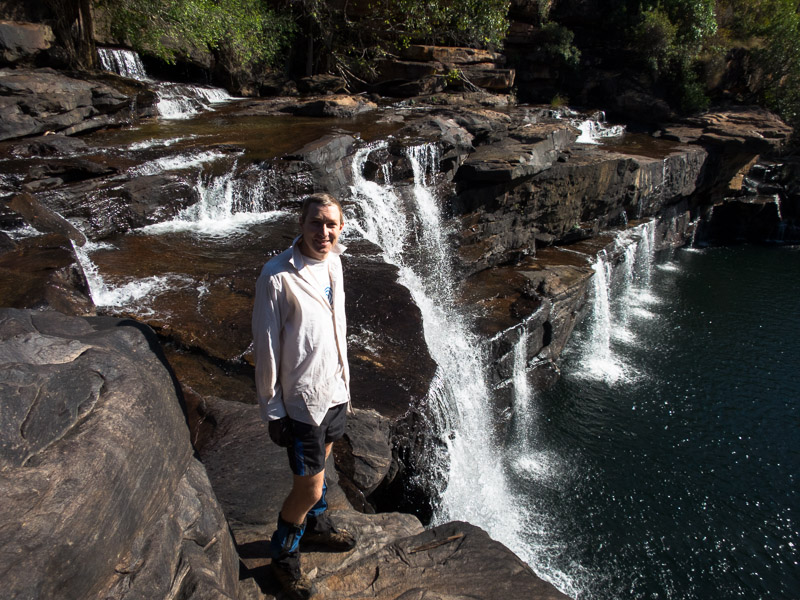 Tom above the falls 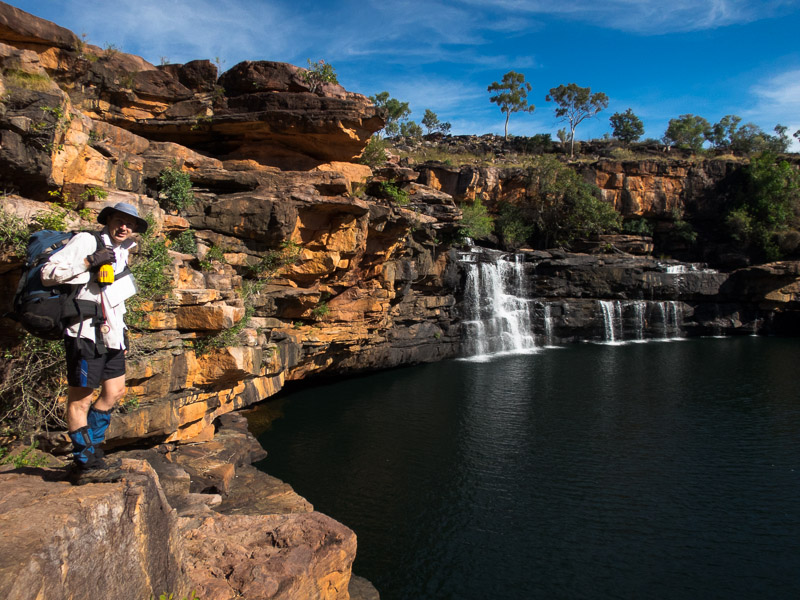 Tom on our way down. The rest of the party sidled down further round on the true right. Tom & I took a more direct route down (which had a couple of tricky sections). 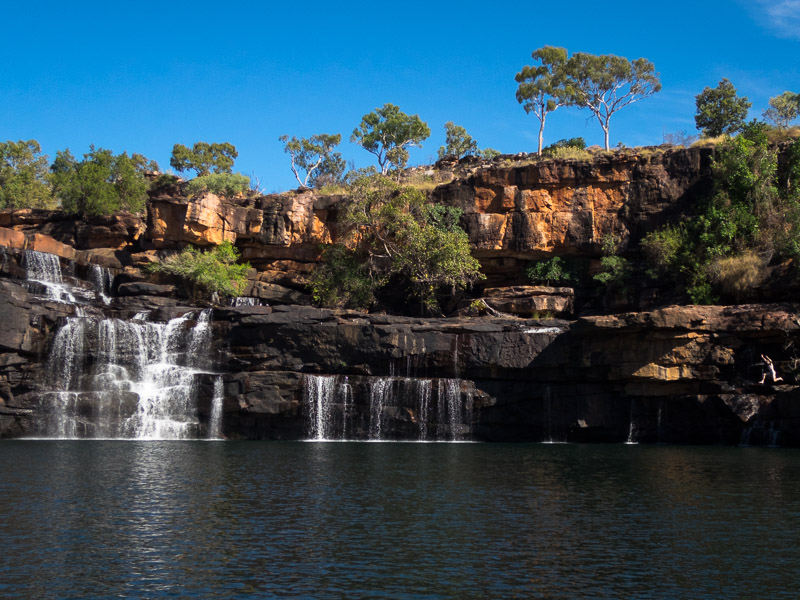 Tom getting his first (?) water jump of the trip in.

That afternoon we visited the original “Bradshaw” art works. 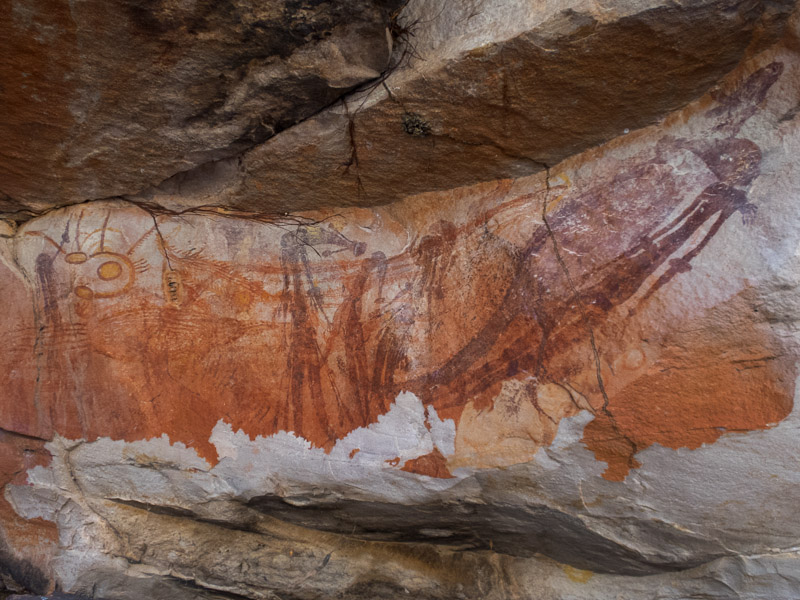 And then we settled down to camp on night 2. The weather was a lot cooler than we were expecting and most of us were cold on the first few nights. 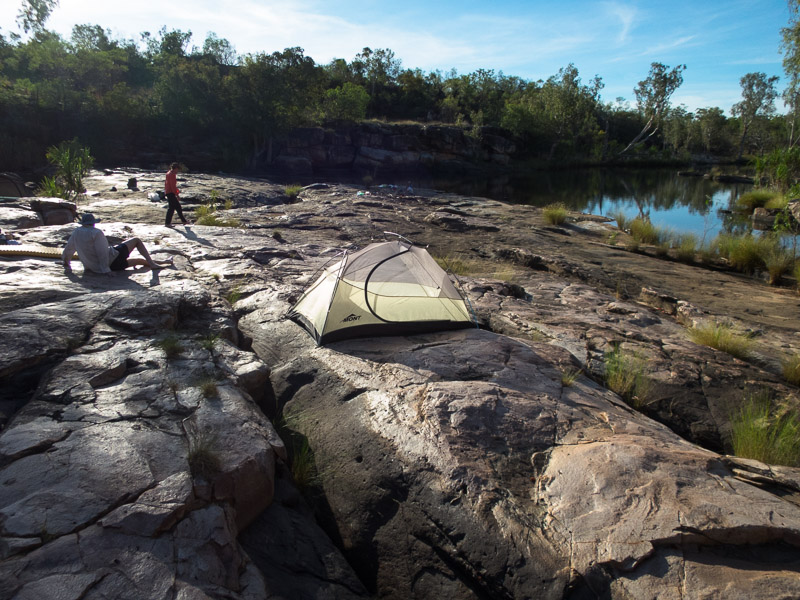 Day 3 saw us go cross-country to cut off a couple of loops on the Roe. Unfortunately we saw quite a few cows, including some herds. In theory DPAW does some culling but from the numbers we saw it’s not that effective. 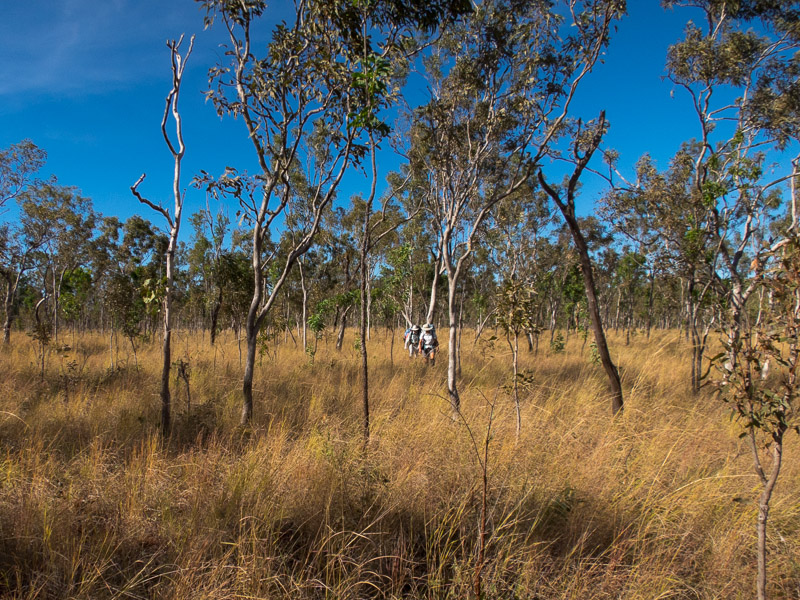 Lunch was had at this lovely set of falls. 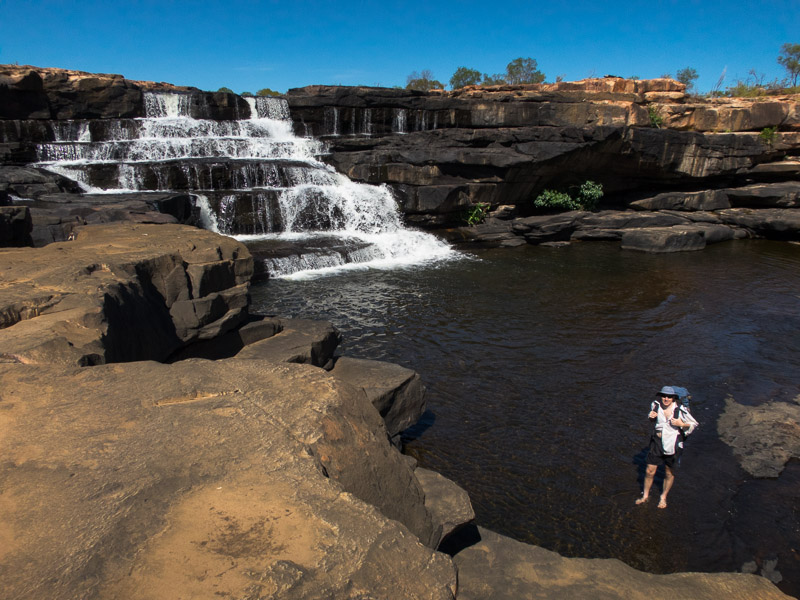 There were lots of pot-holes around. This one fitted Tom in it! 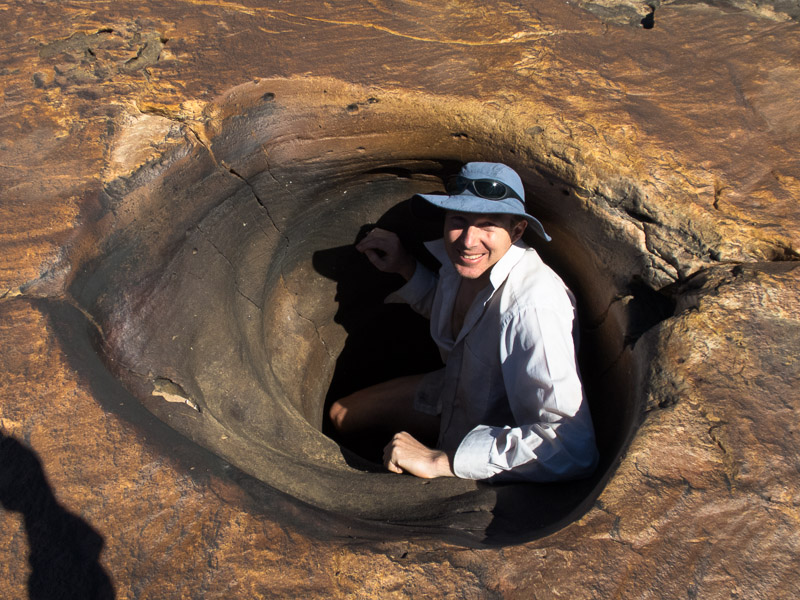 Tom in a pothole

That afternoon there was generally easy walking down the river. 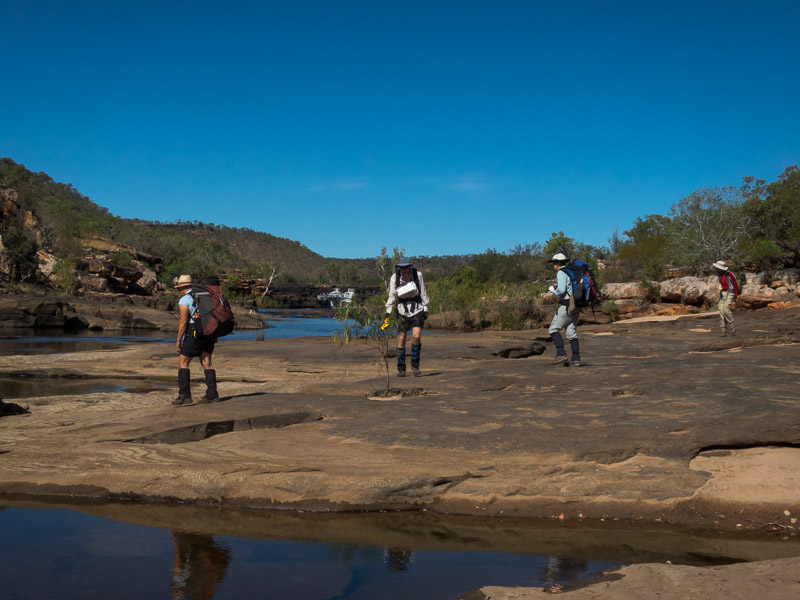 We found some lovely shady overhangs, which unsurprisingly had rock art in them. 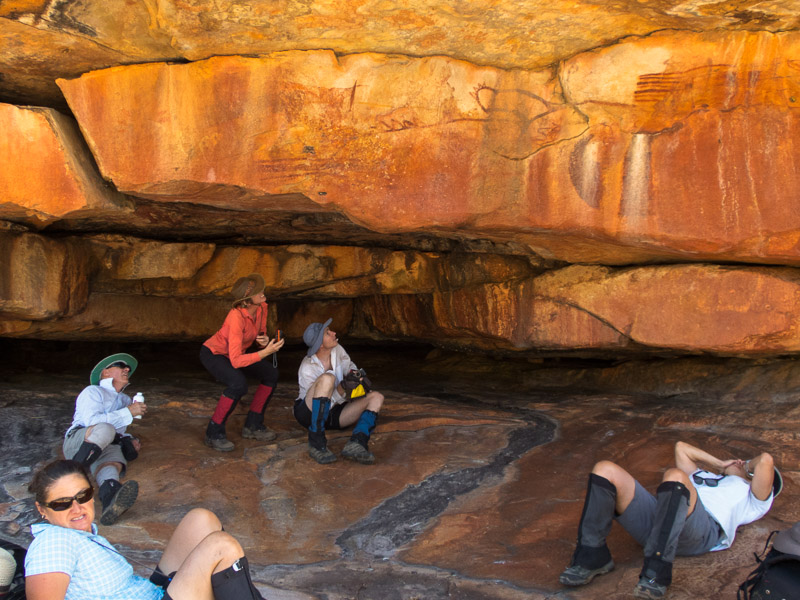 The party checking out the rock art

And we had a delightful spot to camp for night 3. 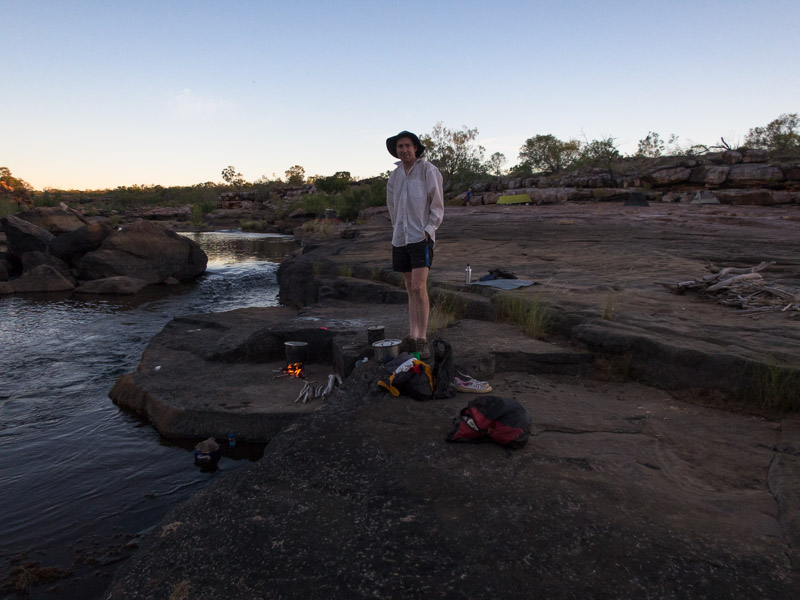 Tom in the kitchen at night 3’s campsite.

Day 4 we continued down the Roe River. The rocky slabs gave way to more sandy country. It was fairly easy going but not particularly exciting. Tom & I went on a detour up Wyulda Creek where we found some lovely waterholes and had a swim. 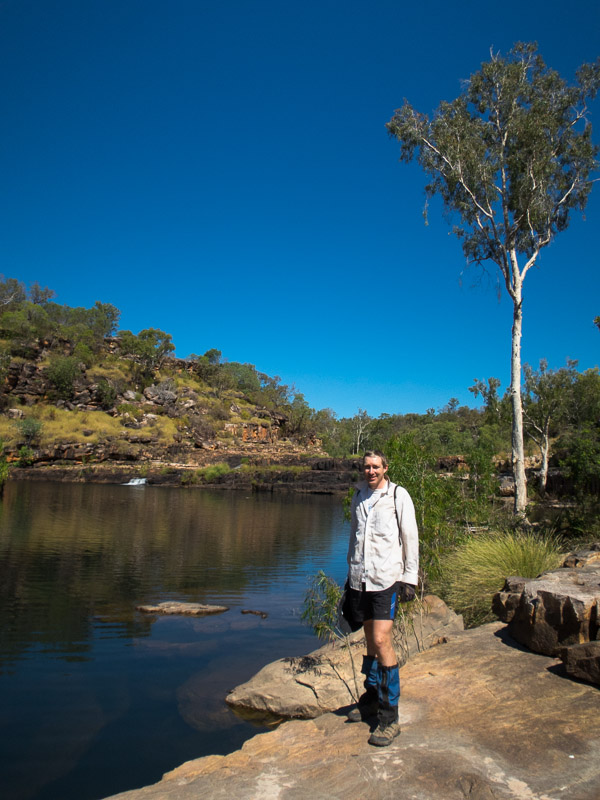 Expecting to find the rest of the party at camp we were surprised when they flagged us down only a short distance from the Wyulda Ck/Roe River junction. Unfortunately one of our group had broken her wrist and the decision had been made to activate one of the PLBs. A chopper picked her up within 90 minutes of the PLB being activated. And so then there were 7…

Subsequently we got to our intended camp later than planned. We were a little surprised when the creek we intended to follow cross-country the next day was a very small, dry channel. Tom & I headed up it to see what was going on and found the larger creek (with some water in it) actually joined the Roe 500m downstream rather than what was shown on the map. 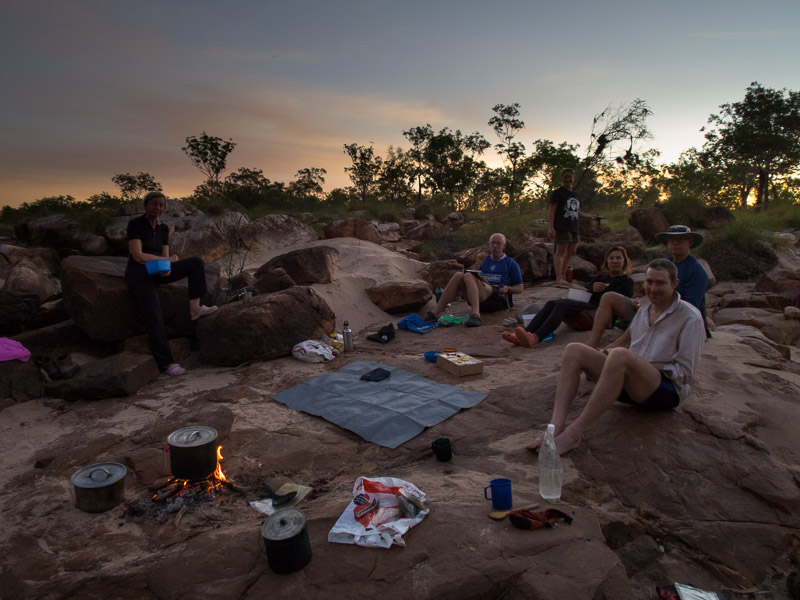 Our depleted party at camp on night 4. Note the salami, cheese, crackers & olives for entrée. 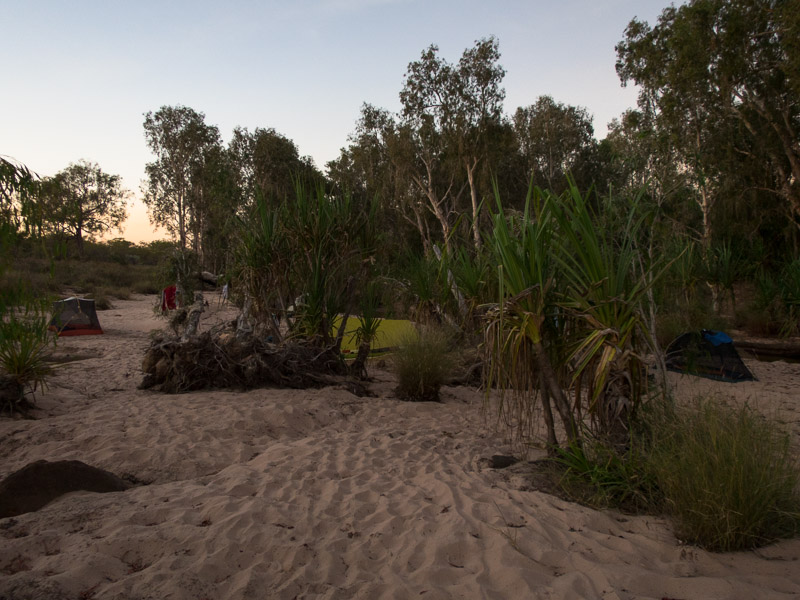 Night 4 – our only sandy camp. Not sure if it was due to the sand but it was a very cold night, with plenty of dew.

We had groups dinners on the trip. Each evening’s food was allocated to one person to prepare (everyone doing 1.5 nights over the trip). Night 4 was Melissah’s night and we had a delicious laksa, followed by damper which we filled with honey for dessert. 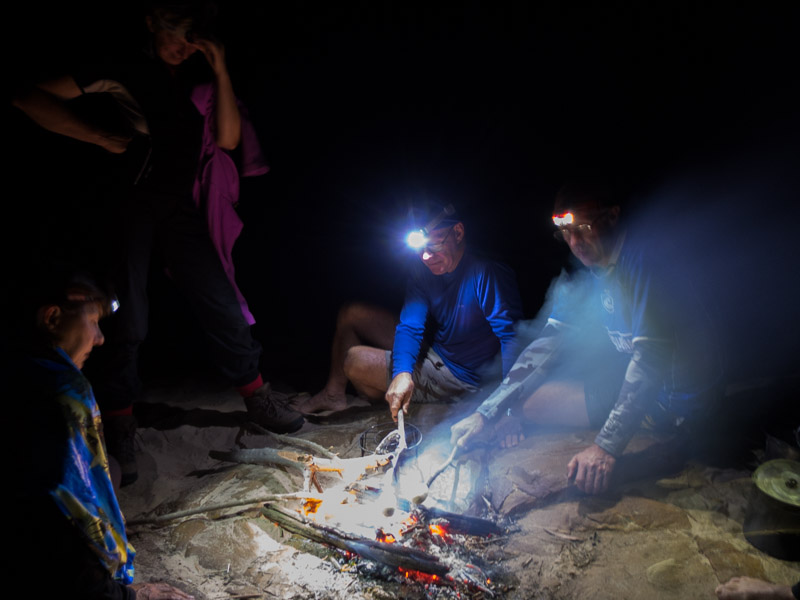 Day 5 we left the Roe to start our cross-country route to Garimbu Creek. DPAW had been burning in the park in May and when we encountered those sections the walking was a lot faster. 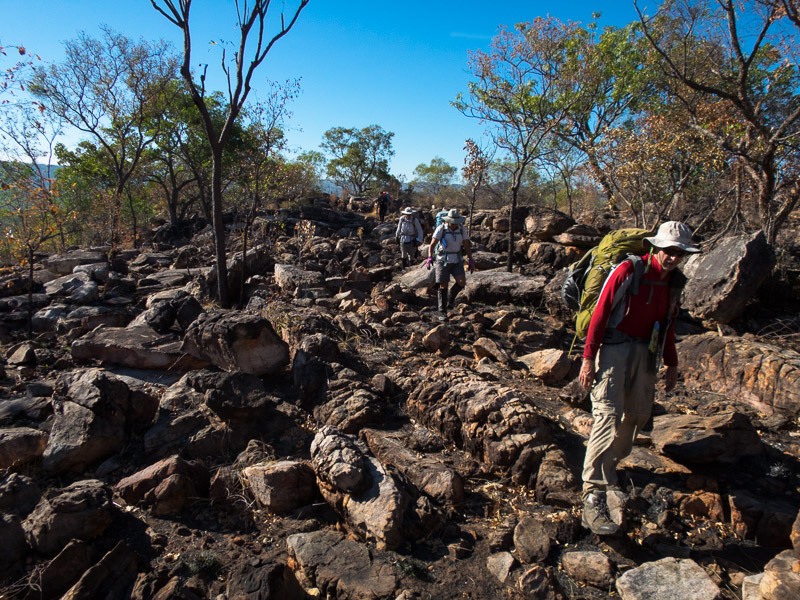 Crossing burnt-out country made the going much easier 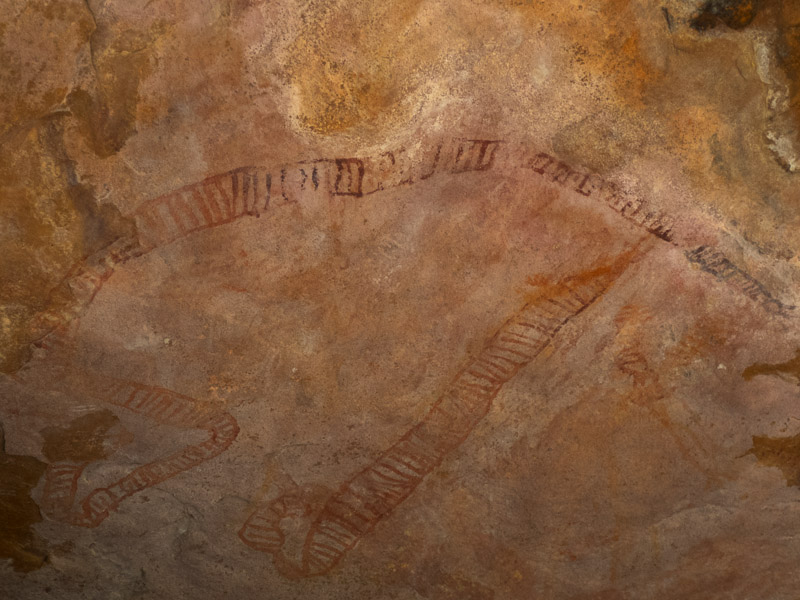 Where vegetation hadn’t been burnt then things were slower as you normally couldn’t see where you were putting your feet so a lot of concentration was required. 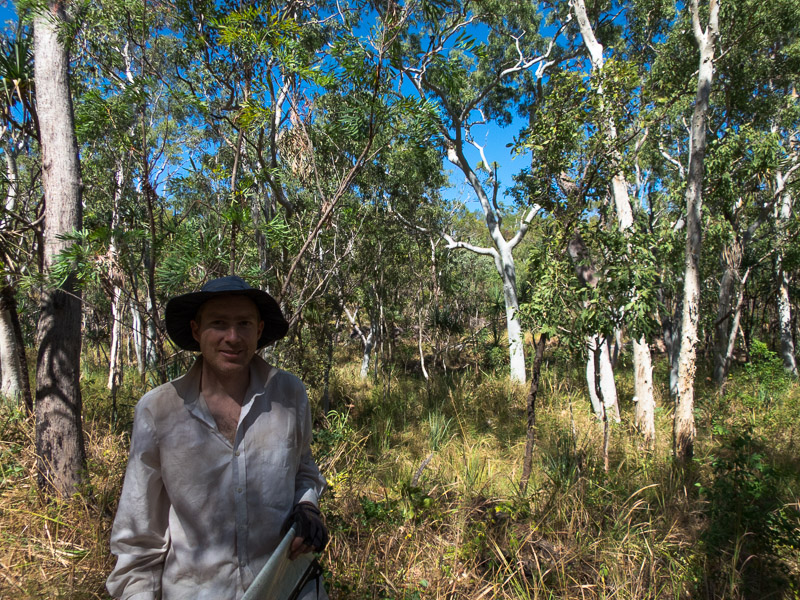 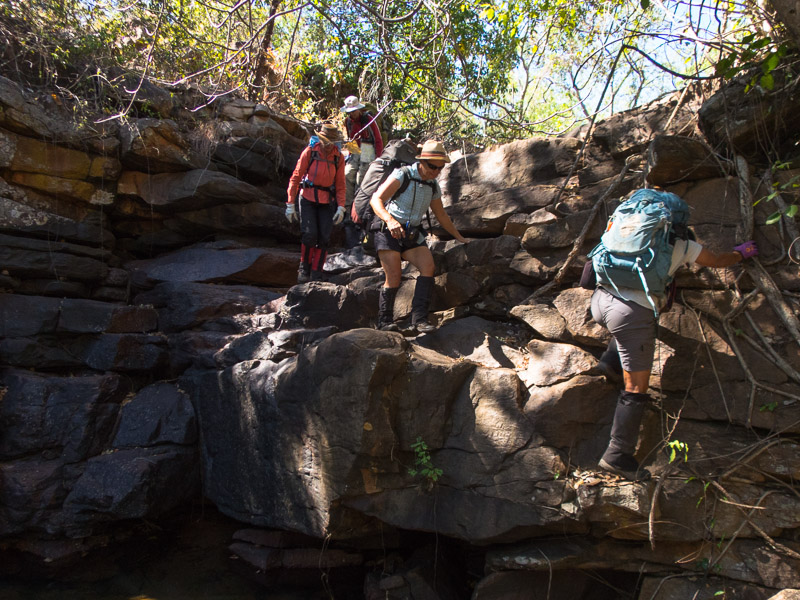 Scrambling down a creek

We’d had an early start on day 5 as we were going across the tops on what could have been a long day. The going was reasonable, but we’d been looking for a campsite for a while with no options coming up. We were pinning our hopes on a permanent waterhole marked on the creek we were descending. When we arrived at the waterhole it wasn’t quite the picturesque camp we were hoping for. Having been walking for over 8 hours we weren’t keen to walk much further. It wasn’t too bad; there was some sand we could flatten out to sleep on and the water was ok if you cleared the scum off the surface…. 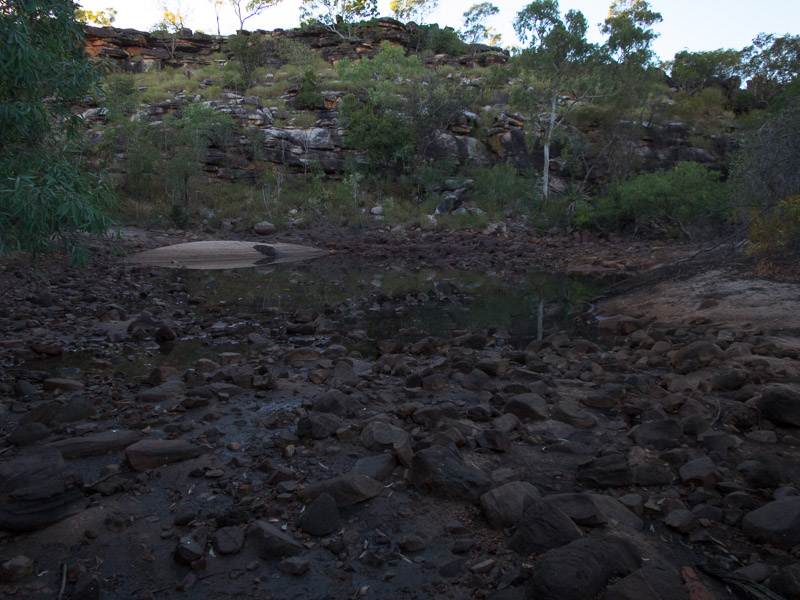 I had a bit more energy left then most of party so I decided to push on another hundred metres. To my joy and amazement what had been an exclusively bouldery/rocky creek, with little surface water, suddenly gave way to large rock slabs with running water and even some waterholes big enough to swim in! Amazing. Everyone was pretty happy. 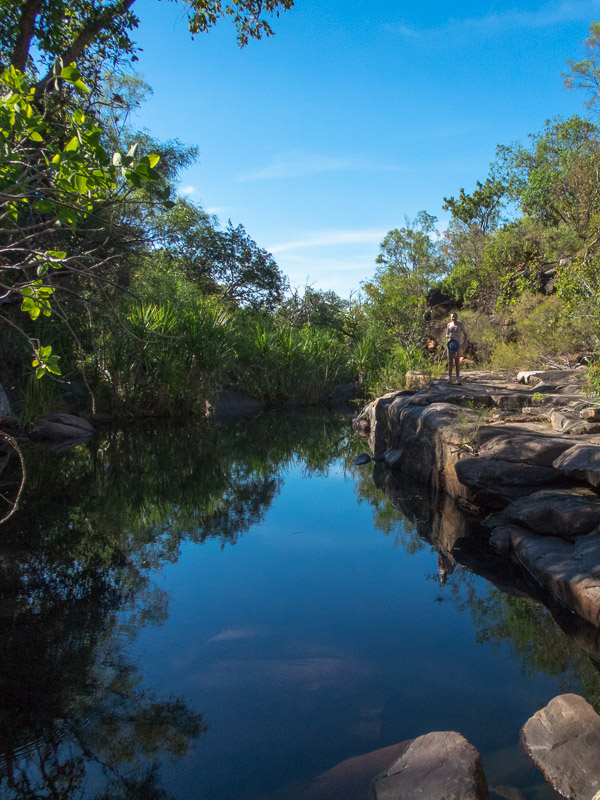 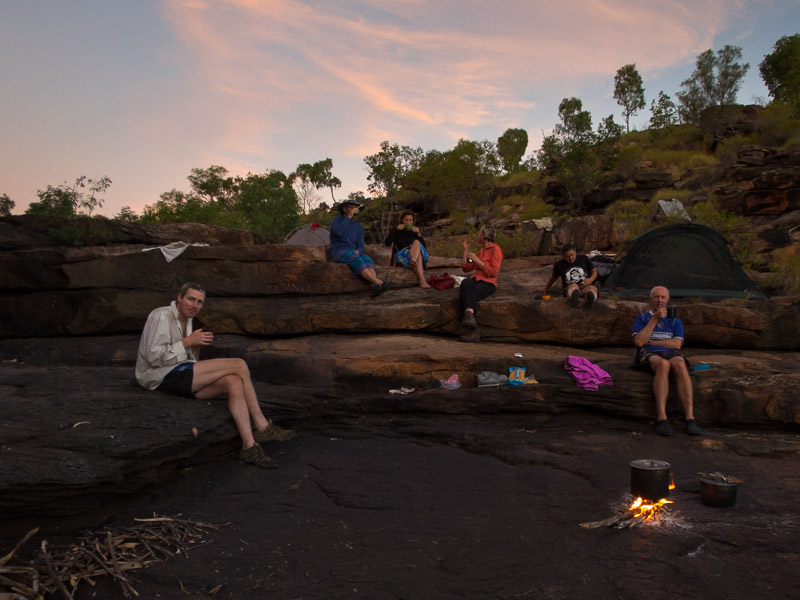 Our amazingly comfortable campsite for night 5

Day 6 we didn’t have much distance to cover but we were expecting difficult terrain. The terrain didn’t disappoint, we spent 5 hours covering 5km (including breaks). The worst of it in ‘tiger country’ where we were going about 0.5km/hour through deep spinifex and boulders. We were pretty happy when we got to Garimbu Creek and our food drop. When the food drop had been hung in the trees at the start of the trip one of the bags had rolled off a boulder and got a couple of tears in it. We were a bit concerned that this may have made it vulnerable to animals, but while there had been some gnawing the animal seemed to have mainly had a penchant for plastic bags. The only food casualty was a twiggy stick (salami). 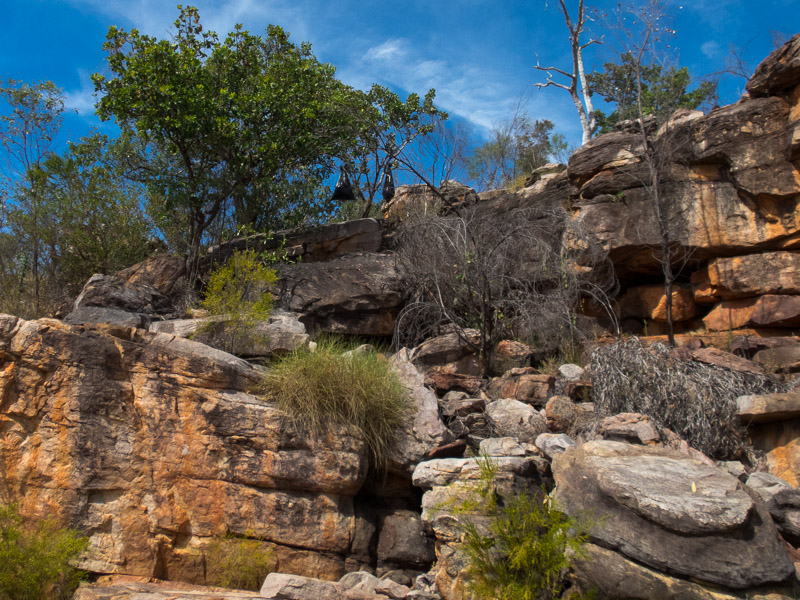 Our food drops hanging in the trees as we had left them 6 days earlier.